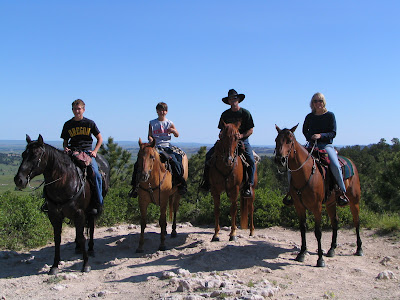 There was no cell coverage at the Outriders Trail Head south of Chadron. No Alltel, no Sprint, no bars to be had. And I didn’t miss it…

We left home at 8:47 AM Saturday morning. Headed down Hwy. 92 toward St. Paul. Detoured a mile north of 92 at Hwy 30, due to surface damage, but just took us 2 miles out of the way. No biggy. Met our traveling companions, Rich & Kathy Newberg, in St. Paul. Fueled up and back on the road. Had 90 items listed on a piece of paper for an “I Spy” game. A little friendly competition between the Newberg truck & ours. At last count, they are still in the lead.

About 9 hours and $235 of fuel later, we reached Chadron at about 4:30 local time. Our best mileage was 7.62 MPG and worse was 6.44 MPG. That I am sure is a result of following some morons through the hill country that could not hold their speed or let us pass. But I digress…. 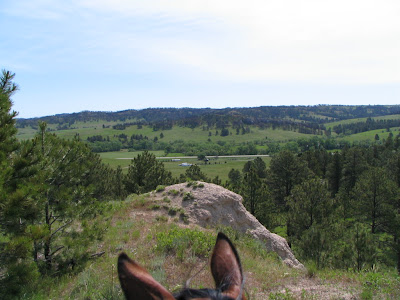 The Outriders Trail Head is managed by the National Forest Service & is located just north of Chadron State Park. It is free to overnight, offering some well-constructed corrals and running water for the horses. We unloaded the horses and set up cots for the kids. John and the boys hiked up the hills. Had a light dinner when they returned. Jerry Schumacher, formerly of the Forest Service & who has been active with the recent Forest Service letter drive, stopped by to visit for about an hour. Watched the moon rise, the night cooled & we hit the sack about 10:30 PM listening to a distant peacock crow (do they crow or sing?) 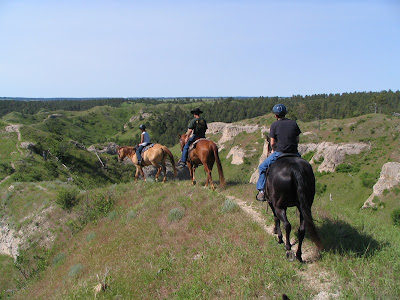 The night was crisp. We were wondering if we shouldn’t have brought a space heater although without power, it wouldn’t have helped us this particular night. Once out in the sun, the day we warmed up. Pretty sure the temps were in the low 70’s and no humidty. We saddled up and rode the trails above the camp to the Black Hills lookout point. If Ft Rob trails are anything like this – which is in the same vicinity, I am glad I opted to shoe the horses. The views from above were as incredible as I remembered them; off to the east you could see the damage to the trees caused by the fires of 2006. 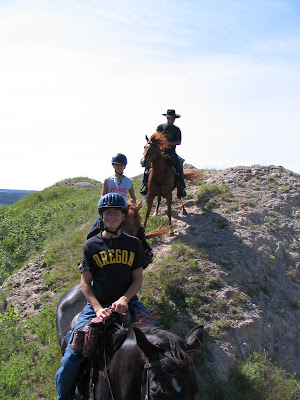 We ride out on the narrow ridge trail that we rode when we were here in 2004. It was just as scary now as it was then. At one point case was climbing nothing but rock that was reminiscent of “Cougar Rock” on the Tevis ride. At that point, we decided not to move on (see Kathy, I’m not telling any stories!) and it was a hairy moment watching Butterscotch get her footing on “the rock” and pivot to come back down.

Enjoyed a two hour ride and broke up camp. Since this was our first camping trip of the season, we learned quickly last night the things we forgot. Just finished our Wal-Mart shopping and have just crossed the state line in to South Dakota. 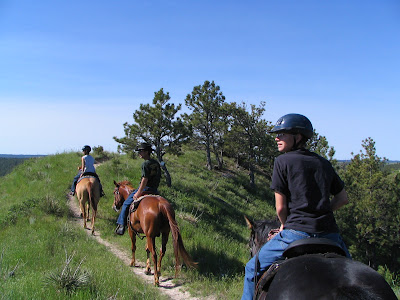