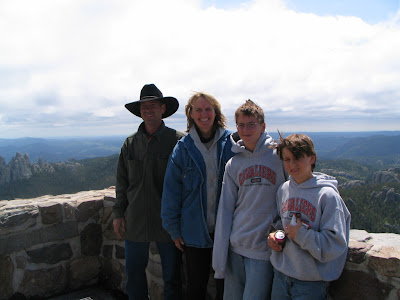 At this moment, I am in my flannel pants and sweatshirt sitting in the trailer instead of around the campfire. Its 10:00 PM and darn chilly outside yet! The kids just came back from running around with the other RV park kids and have reluctantly settled in for the night.

The rains let up after about a ½ hour. Our horses were chilled; visibly shaking. We didn’t bring stable blankets and wouldn’t have had any water proof ones anyway. We took our sweat scrapers and got the water off them. Hand grazed them while the sun started to come out. I was sure glad I had the fleece riding breeches I had packed on impulse! 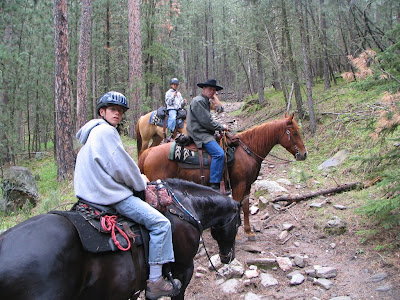 We saddled up about 2 hours later than planned, but nothing that would set us back for the day. A group from Iowa was also saddling. Probably close to a dozen or more horses at this stable area. One of the KOA employees came down with a skid loader to work on cleaning the manure dump. Truly, I didn’t even notice he was there; kind of immune to the noise of a loader as we use one. As John & I were walking Windy & Ginger back to the pens after saddling, so we could fetch Blue & Butter, that skid loader started banging the bucket on the top of a huge roll-off. Ginger spun to see what was above her. Windy literally started bucking on the lead! The first thing that crossed my mind was she was bucking at the rear cinch; took a moment to realize it was that skid loader bucket. The poor KOA guy had a dozen horse people yelling at him to “shut it down, shut it down”. Seemed like all of our horses had quite a moment over that! 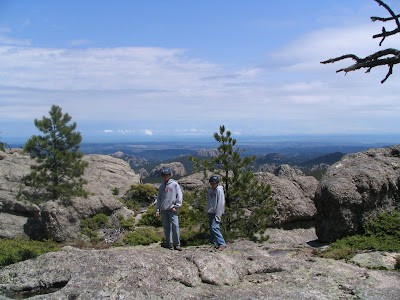 Today’s destination was Harney Peak. The maps were kind of confusing; one said 8.8 miles while another one said 6 miles. So it was anyone’s guess. I set my GPS so I could watch the mileage & elevation. The terrain was rough; very rocky and a lot of places the horses literally had to step up. The horses (and kids) handled it very well. I was in awe of the beauty. The smells. The lack of litter. Either people truly respect this land or the Forest Service has a heck of a maintenance budget! 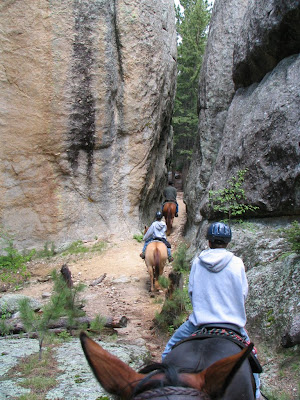 Our first stop was in some rock formations like none we had ever seen. You walked thru a tunnel into a little cove area. The horses stood quietly and rested as we explored this little canyon; took a lot of pictures. We figured we were probably 1/3 of the way to Harney.

The trail took us along the outer side of the mountain with views to die for! A few times the kids would dismount and go look “over the edge”. The horses welcomed these breaks from the climbs. The trails were well designed with plenty of switchbacks to lessen the severity of the climb, but it was work none-the-less. We didn’t push them; took plenty of breaks and rested when needed. 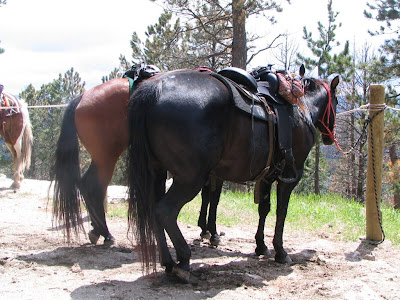 About 4 hours later and 5.3 miles traveled, we arrived at Harney Peak. They provide tie-offs for the horses & then our walk to the top begins! Made me appreciate the work the horses did to get us to this point. The views from the top were incredible; “breathtaking” is cliché, but fitting. We had our lunch while there; gave the horses about a 45-minute break & then started our descent down a different trail. It was longer, but considered “moderate” on the map compared to the “difficult” one we just got off of. At first there were some very steep stair steps the horses had to jump down with both feet. My stomach was a little nervous on the first few and then Windy found her rhythm and we made it down without incident. Where the first trail was rocky and steep, this one followed a creek; the switchbacks were a lot of rock slabs, but also some less rocky trails as well. 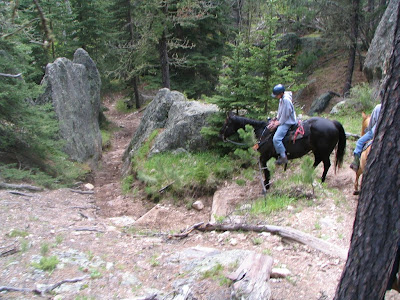 About 5 miles into the return trip, Windy was getting irritable with the rest of the herd. We had fallen in 4th for most of the ride; sometimes bringing up the rear. Very respectful in her place. But now, my little mare was getting cranky. A couple times I caught her trying to bite Butter’s tail or giving “the look” to whatever horse was behind us. We moved out into the front & she quickly picked up a 3.8 mph pace. I think she was just tired of being in the group & wanted to stretch a bit. I could relate; my mother hat was slipping in about the 6th hour, too.

We made it back to camp just as the string horses were being returned to pasture, so we got to follow the herd. The GPS showed 7.7 miles return trip. We’d been on the trail for 8 hours.

Never once did I take off my jacket. And under it I had a sweatshirt and t-shirt on. Many times I put on my riding gloves and ear band. John was cussing that he didn’t bring his “Elmer Fudd” wool cap. But you know, I would rather have the temps as they were today than hot and humid. It was a lot easier on the horses and on us.

Ginger had a superficial cut on the pastern & Blue had a gall sore under his front leg. It wasn’t under the cinch but where his leg made contact with the cinch when he stepped. I doctored him up tonight and will keep it medicated the rest of the trip.

Tomorrow we leave for Deerfield Lake Resort. The weather promises to be….. well, anyone’s guess! Wish us luck!
- June 17, 2008