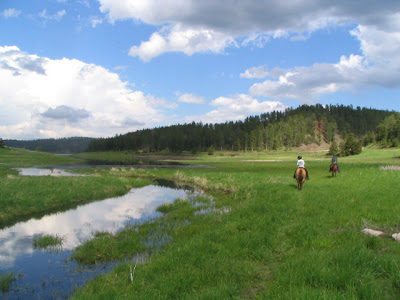 After I wrote yesterday’s blog, John and the kids returned from fishing. When Case opened the trailer door, he got zapped with electricity! I thought he was exaggerating and just perhaps pinched himself, but shortly thereafter, McCain turned on the tack room light from the outside of the trailer and got zapped, too! What the heck!? To get us through the very cold night, we switched the lights to battery and plugged the space heater directly into the electrical site. Add trailer wiring to our list of woes.

We awoke to rain and hail beating on the trailer. Hoping the afternoon would clear up, we went into Hill City to take Hi-Ho to the repair shop, ate breakfast in town and picked up hay. A part needs to be ordered, so we brought it back. By noon, the sun had come up and we saddled and headed over to Deerfield Lake.

Today was by far the warmest day; probably in the low eighties. All the extra jackets and raingear stayed tied to our saddles. Windy’s repaired rear shoe held up for the entire ride even though this would have been one ride that we could probably have done barefoot for the most part. Unfortunately, right before the end of the ride, Butter lost a front shoe. We were making a climb, and we assume she overreached and pulled it off. We found the shoe as soon as it happened. Dog gone it! 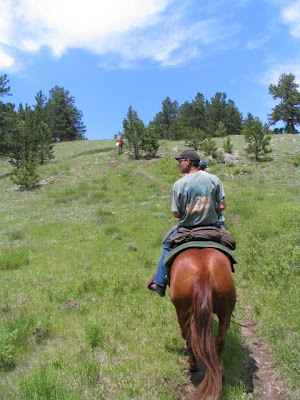 As I mentioned the trails was pretty moderate terrain wise. The horses settled in nicely for what was to be a twelve-mile ride. Ginger had her uppity moments. I wish she and John could find a way to come to terms with those times. Both are pretty bull headed! We rode in some forest area and then along the lake for some magnificent views. The sky was an awesome blue with plenty of clouds. 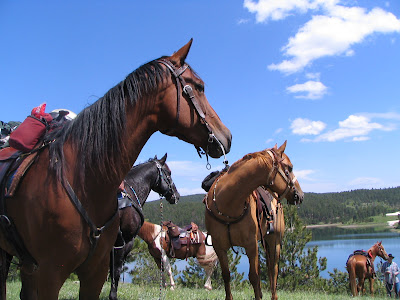 We stopped high upon a peak to break for snack. There were boats below us that kept the horses’ attention. I think I got some really cool pictures of my herd looking toward the lake, head and ears held high. At one time, Windy saw a herd of cattle. She watched them for a while and then started trotting in their direction. I quickly caught Blue and Butter so she wouldn’t have “partners in crime”. When she realized she was on her own, she came trotting back up the hill.

We rode hills high above the lake and then down in the fields surrounding with plenty of water crossings. The pine trees provided a beautiful backdrop for the trail. We saw a lone elk eating in the sunshine. She noticed us, but was undisturbed.

One area of the trail was closed due to nesting season for eagles. We had to detour around. Took a picture of what I thought was an eagle in flight, but still not sure. We’re told they are plentiful in this area. 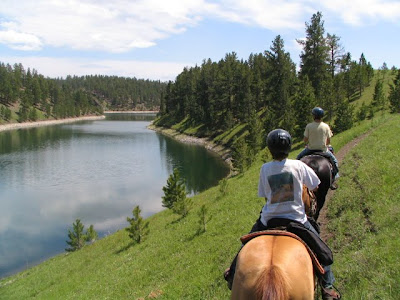 Rode back in after five hours. Horses still had plenty of energy to move quickly that last stretch into the campground. The owners of the campsite met us at the stable area, anxious to hear how our ride went. Once again, Blue garnered the most attention. Sheryl said we could most definitely leave him with her! He is a good boy and was a perfect partner for McCain today.

Groomed the horses & put them back in their stalls with hay and water. Returned to the trailer for Colorado Pork chops which were cooking in the crock-pot all day (hooked directly to the electrical post!)

Tomorrow we take the truck back to the shop for the part. Hoping to get a few hours ride while repairs are being done. Guess I’ll earn more Cabela’s points on the Cabela’s card as no doubt repairs won’t come cheap! Will probably be at Ft. Rob in late afternoon at best.
- June 21, 2008