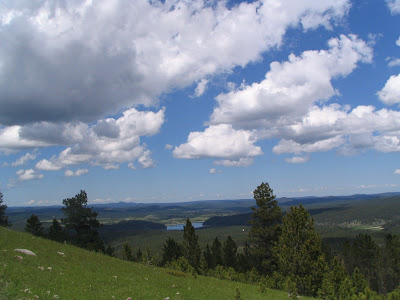 Awoke to hail beating against the trailer about 2:20 AM! The picnic table was covered with hail; almost looked like snow cover. Saw Rich out trying to get the hail off his awning. And thought of the horses in their outdoor stalls being pelted by marble sized hail. What did we get them into?

The sun was shining brightly when we got up. The hail from the awning still on the ground as we made a traditional breakfast of bacon and eggs. Started to tear down camp hoping that the truck part would be in by noon and we would be on our way by late afternoon. John noticed the trailer had a flat tire – what else could go wrong? Rich and Cheryl of Deerfield Lake Resort were kind enough to allow us to stay until we got the final truck prognosis.

John morning quest was to put epoxy on Windy’s shoe to where the hoof had chipped to help secure the shoe and reset Butter’s. He started by pulling them out of the wet corral and tying them to the hitching post and drying them off. John is becoming quite good at this farrier stuff. Both the horses were reshod and ready to go.

Ginger wasn’t herself this morning; she wasn’t eating her hay and just generally seemed a little (for lack of better word) “pissed off”. I think she was tired of being cold and wet every night and the hail was the final straw. Cheryl told me to let her graze over by their shed, so I brought her out and she quickly cleaned up the area. It put her back in a better state of mind, I think. 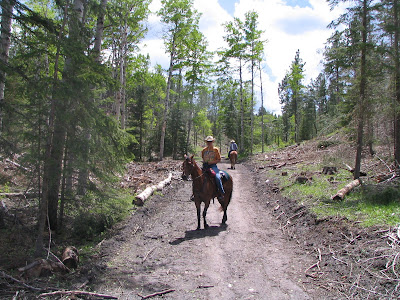 Kathy, Rich and I saddled up and headed for Hat Mountain. We were told this is the second highest peak to Harney! It was a gorgeous ride up through the pine and aspen trees. Also a lot of the area has been logged. The horses slowly climbed the 6800 feet to Hat Mountain. The sky was bluer than blue – the clouds made for awesome pictures. 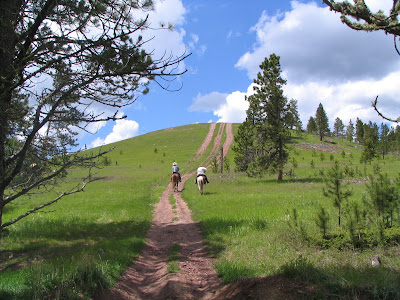 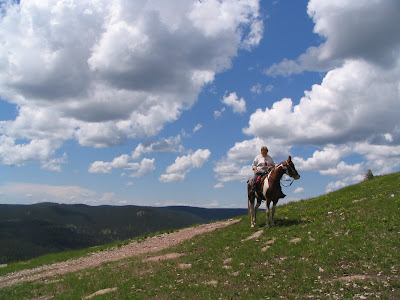 When we reached the top, we took our obligatory pictures and took in the view from all directions. Paradise. 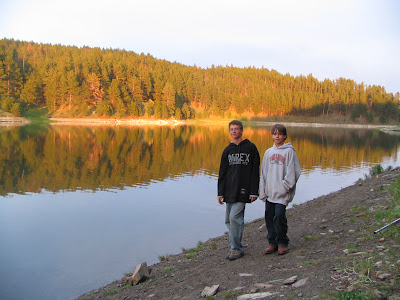 Upon return to camp, John was back, no part to be had. Load up and head out on a wing and a prayer. We departed Deerfield Lake Resort and started our climb up the first hill at 12 mph in 4WD low. And we made it. At one point, John told the kids to settle down; be quiet because we just “never know when the truck will blow!” Case was very quiet for a long while & then at one point told me he said a decade of the rosary. I asked why and he said he was scared of the truck exploding! He too the “blow” literally! Poor guy!

After driving for quite a while in yet another major thunderstorm, we arrived safe and sound at Ft. Robinson at about 10:30 PM MT on Thursday, June 20. Ginger proudly walked into Barn 106 and was bedded down in her stall that guaranteed her no rain, no hail and no cold. I could almost sense her satisfaction.
- June 21, 2008