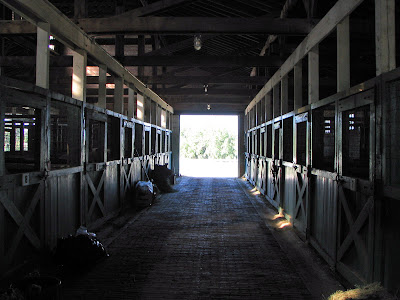 John went to the barn early to feed. He mentioned that Butter was pretty nerved up. “Side passing” back and forth in her stall, he said. “Stall weaving”, I said. We don’t stall our horses and I am pretty sure she wasn’t stalled with the previous owner. She wasn’t out the day before, so probably a bit claustrophobic. I had planned to ride her on the morning ride, so really wasn’t too worried. Until I opened her stall! 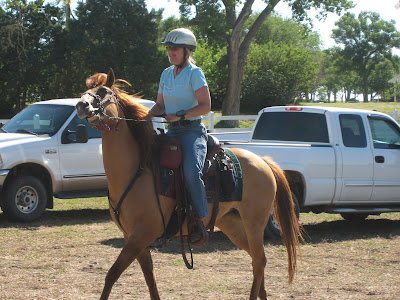 She was a handful! Took her out to lunge her and had a hard time even leading her. A lot of bucking and jumping on the lunge line. Even after “whoaing”, she would again take off. I’m sure in the Parelli world, this could be described as “whatever” brained – the bad one! Lead her around and just let her graze and relax. I knew she wasn’t 100% down, but decided to saddle her and go from there. Lunged a bit with the saddle on and decided to go for it. As soon as I mounted, she high-tailed it for the barn. One reined her, but she would stop the forward motion, rear up and move sideways. It went from bad to worse and at the first opportunity to safely do so, I dismounted.

I had already decided I wouldn’t ride her – I was pretty shaken, as she has never frightened me before. But I also didn’t want to leave on that note. Dave was kind enough to come over; help me back on and lead me around. And then he rode her and got pretty much the same reaction I did. While he continued to work her, I went and got Windy out. Still shaken, Brenda helped me saddle. Once mounted on my very best horse, I relaxed. We had a nice ride in the buttes again with about a dozen friends; the riders in our group were as young as 8 years old to mid-70’s. All demonstrating fabulous horsemanship skills! 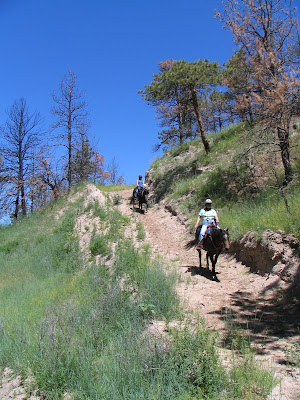 We were fortunate enough to come upon the big horn sheep (are they sheep or goats?) We were careful to be quiet so our group could all see them and get pictures. The horses were pretty high headed and big eyed over these “new” creatures. We continued on down the trail. Had the opportunity to do some pretty nice climbs high above the Fort. 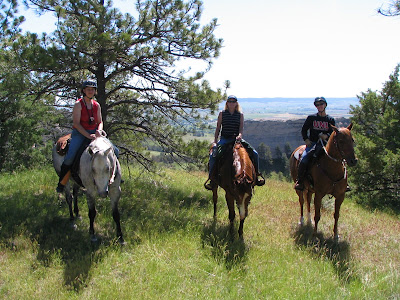 On the way back, those same sheep (or goats?) were on the trail. This time, they didn’t want to move and the horses weren’t sure they wanted to continue past them. Kathy Newberg did her best “scat sheep” sounds to get them moving. Definitely would have been a sound clip worth hearing! The day was the warmest so far; we returned to camp after a four-hour ride.

John and I later went back out. He rode Butter and I took Blue and ponied Ginger. Butter was a little feisty at first, but demonstrated none of the disrespect she had shown that morning. Once out in the field, we let Ginger lose from the lead and she trotted quietly next to Butterscotch as we rode about a mile.

The entire trip, I missed one thing. A campfire. It had been too chilly or wet the previous evenings. So John made me a campfire and enjoyed the evening chatting with those who stopped by.

I lost Case. When I returned to the trailer, he told me he and his new buddy were heading to the cabin and would be right back. A half hour later & nearing 11:00, he hadn’t returned. The lost was found within 10 minutes, thank goodness. Our campground was full of friends – he was in good hands.

With the newly repaired truck, courtesy of $187 and the Chevy dealership in Chadron, we were ready to pull out on Sunday morning – the end of our nine-day vacation…. Or “quest”. 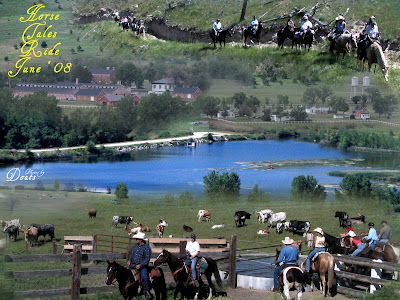