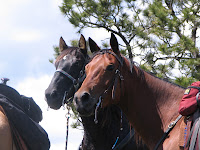 On Sunday, we moved the horses down to a different pasture. I ponied each of them down on Blue. I was very happy that Black ponied easily; stayed behind me, slack line & didn't even try to steal corn from the field as we passed it. On Monday, I went down and lunged him for about 15 minutes but didn't ride.

Last night we were invited to ride at a friend's over by Blair who has some awesome trails behind his home that he and his neighbors graciously allow guests to ride. Its an annual outing for a few of us; many whom are involved with the Trails Committee or Horse Council in some capacity. I took Windy and trailer pooled with Sharron and Dianna. As usual, the ride was beautiful but did have an incident when Windy got into some nettles and pretty much freaked out. She is so sensitive to nettles and was real close to being out of control. All I could do was tie her to a tree and get her to relax and then try to clean her legs with my hand.

Nettles aside, I noticed when I unloaded her at Sharron's and reloaded her in Dianna's trailer and again when I was saddling her that she has become a bit disrespectful toward me. I'm sure working with Black has made me more attuned to Windy's behavior and I have to say, I was kind of disappointed in myself. Oh, its not horrible, but she has been getting a little pushy, walking out before I mount, walking through me when loading. I correct her... but when did I start letting this happen. With Black under close scrutiny right now, I wouldn't allow that with him -- why do I allow it with her? Because she is the Princess???

After I put him away, I slipped the halter on "Princess". We went directly to the round pen. I think she was surprised that we were going to work for a while. Once I got her attention, she went to work. Got some nice trots & then long trotting. When ready, I moved her into a lope on the lunge line. She got a bit lazy with it, but I persisted. Whoa'd her and did some moving of her hindquarters and stepping over. Sidled her up to the fence & rode for a bit. I did get some nice sidepasses, worked on a half pass and finally did some forehand turns. Although I mentioned being disappointed in how pushy she has gotten, it was nice to see the things she hadn't forgotten and I realize how much further I need to go with Black to get him to this level. And I wonder if I have the gumption to keep it up or the know how.

I am pretty sure I mentioned somewhere in the blog that I do not like to do groundwork. I find it boring and tedious and would so much rather ride. But I also understand the importance of it and I'm starting to see the fruits of my labor with Black. I wonder, though, how far I can get before I don't know what to do next? I've decided I will take him to lessons -- as much as I want that time for Windy, I need help if I'm going to continue working with the Black. I worry that winter will come too soon before I'm ready; before he is.
- August 21, 2008

Email ThisBlogThis!Share to TwitterShare to FacebookShare to Pinterest
Labels: My Herd, Training