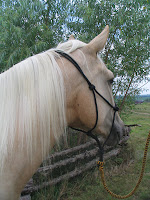 We had a busy weekend! Met some of the Horsetales group, the Platte River Riders and other friends at Big Elk Park near Macy this past weekend. John took Ginger & I took Windy. Had a great time riding through the hills and along the Missouri River. The weather was perfect and even bug-less! How could that happen!

When we returned last night, I gave GinnyBelle a bath and combed out her golden mane and tail. It was her last night with us before she begins her training and goes to live with my friends, Jules & Steve. It is bittersweet -- because although I hate to see her go, I am so happy with where she is going to and love that I will get to see her grow up. Today I let her walk among the herd to say our goodbyes & loaded up and headed to the trainers. She looked so grown up in her stall. Good luck, "Baby's baby"... I'll miss you!

When I got home, I went to the pasture to fetch Black. He'd hasn't been worked since Thursday. We went to the round pen & did some lunging & then some free lunging. Lots of whoas & direction changes. Got him to back by moving toward him (without the lunge line). We worked on moving off pressure with pressure to his sides. And the worked on picking up the feet.

The last time John went to trim Black, he was a royal sh*t! He would pull his hoof out of John's hand, throw his head around, rear... just out of control. I would lunge him and we would start over. Got the job kind of done, but left on a sour note. I decided at that time, there would be no more fights over it & that would be one of our goals.

Throughout the last week, I would pick up his feet and hold them. The fronts are no longer an issue. Tonight I picked up and held the backs for longer than I had before. He relaxed and I would release and do it again. John came over with his farrier tools and trimmed his front feet. He only pulled away once & it was at the end. John picked it back up again and finished the job. I was very proud of how he behaved. Now granted, he used to be fine about being trimmed, but in the last year or so, some of his negative behaviors were flaring up again & not doing anything about it only intensified the problem. Felt like I made a real break through here. I'll continue to work on the back feet and then have John trim them when I feel we are as ready as we were on the fronts.

I didn't ride. Felt we both got a good workout with the things that we did do. Hoping to ride tomorrow. My goal is to have him ready for our camping trip to Brushy Creek on Labor Day.
- August 11, 2008