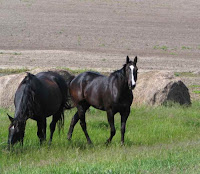 I've been reporting on Horsetales that I have decided to start putting some time on the Black colt. Partly inspired by Fugly's blog on training "The Very Large Colt" and partly because if I do decide to sell him, he needs work. I'm not professing to be something I'm not. Truly, "I don't know nuthin' bout trainin' no horse", but I think I've been around them long enough now to do some basic work with a horse that has already had a good start.

Our sessions so far have been primarily round pen. The last two have been just he and I, with the herd out to pasture as suggested by my friend, Colleen, the trainer who started him almost 3 years ago. She said he needs to look at me as the leader. And Brenda has suggested I keep him in long trots when warming him up. So solo & long trotting was my goal tonight.

Went down to the pasture with halter and lead and was surprised he approached me. Even Blue was slowly moving away from me seeing the "work gear" in my hands. But I quickly knotted Black's halter & walked him back through the corral and into the round pen. The rest of the herd stayed in the low part of the pasture. A lot of loyalty they have to the young colt!

We started with walking & then slow trotting in each direction. Lots of stops & changing of directions. Ritz started running the perimeter of the round pen & Black started chasing him. I whoa'd him in quickly and then started him up again trying to keep his eye on me, not Ritz. A cat ran into the round pen & that caught his attention and it quickly departed. I moved him into a canter in both directions. Whoa'd him again. And then started the long trotting. I worked him pretty hard for awhile; got the lick from him & whoa'd him. Let him recover for a bit & then we walked over to the trailer on the other side of the house.

Tied him to the trailer and lifted his front feet & picked them out. He had been a pill the last time John tried to trim. He has a vertical crack in one hoof that I had hoped would grow out & does concern me some now. Will keep an eye on it. He flinched when I reached for his back foot. Approached again slowly and he gave me his foot. Held it for awhile & then when he would relax, continued to lift it. Cleaned both back feet using this method and he was relaxed. Saddled him and returned to the round pen.

Lunged him a bit with the saddle. Worked on the right goosey side with my hands. Whenever I touch him on that side, his skin just crawls like there are red ants on him. So I softly rubbed that side, scratched it, pushed lightly on it & then slowly worked up to "porcupining" him -- pushing with my finger to get him to move off it. When he would step over, I would rlease & rub him in the spot. And then do it again. Had him moving to just a touch. That area needs work, but it was a start.

For the first time since I started riding him, he walked off when mounting. I brought him back in and he whoa'd. Then we started walking the rail of the round pen. I kept my right calf next to his goosey side, slowly adding pressure with my foot. He would jump or act like he was kicking up at my leg, but I would leave it there and let him work thru it. Got a nice sidepass to the right, but no go from the left.

Let it go for a bit and trotted the rail. Got some real consistency from him; especially if I would post the trot. It was like my rhythmn kept him going. I was real happy with that. Decided rather than just attack him on his goosey side, I would fool him into forgetting about it, so I slowly brought my foot down and asked for a half pass and was surprised when I got it. Oh, it wasn't pretty, but it was definitely a try at what I asked for & he didn't goose at it. Went back to trotting; whoaing, backing. A little sticky at the back, but not bad. A little sticky at the gate, but using Brenda's method of keeping them moving thru it, we did. Got him to move off the forehand again; not pretty but what I asked for.

Unfortunately as the sun went down, the mosquitos came out with a vengeance. I hated to quit. Felt really good about the ride, but the bugs were driving me nuts. We quit on a good note. He hung with me at the barn again after he was untacked; headed to the pasture after I walked away.