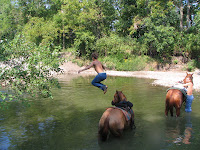 We just returned from Labor Day weekend with the Musils and the Newbergs at Brushy Creek Recreation Area near Lehigh, Iowa. What a great weekend! The weather and the company couldn't have been any better. And wow! Does Iowa know how to do up a horse camp or what???

McCain is a freshman this year and has to suit up for varsity home games, so we did not get on the road until Saturday morning. The alarm went off at 5:00, rolled out of bed at 5:30 and horses loaded and on the road by 6:30 AM. Arrived at Brushy Creek at about 11:00. Was really impressed with our camping spot; although we made reservations too late for electrical hook-ups, our primitive spot was nicely shaded with a water hydrant directly across from our trailer. The camp had nice shower houses and bathrooms, for the holiday weekend, the park brought in porta-potties for each area, again, directly across from us. Newbergs and Musils were on the trail when we arrived, so we set up camp. Later the kids wandered down to the beach area to swim.

All of us went on a late afternoon ride. To get to the wildlife preserve, we had to follow about 2 miles of "all weather trail", very similar to what is on MoPac or Oak Creek Trail. And then went down into the trees. The trails in the trees were dirt, some water crossings - very nicely maintained in such a way to protect from erosion.

John was on Ginger, Case on Butter, McCain rode Black and I was on Windy. As usual, when we ride with the gaited horse crew, our horses get pretty high. And this first day was no exception. We left camp at a pretty good clip. Our quarter horses got pretty fired up trying to keep up the 5 mph pace of the gaited horses and we all struggled with them. We rode for about 2 hours and frankly, that was enough. I knew McCain had too much horse for him. But I didn't think he would fair any better with Windy, so we just rode the horse we had and glad to make it back in one piece! I told Tammy and Kathy that I could tell Windy was just pissed! You know how you can feel that sometimes? She was very pissed!

Had a nice dinner over the campfire and roasted StarBurst candies. Kathy shared some awesome apple dumplings for dessert!

John and McCain changed horses for Sunday's ride and McCain did much better on Ginger. We also changed the game plan and had the quarter horses lead. Ginger clipped along at 3.8 to 4.2 mph which is comfortable for our horses. We decided to leave the camp and go north around the lake on the all weather trail -- mainly, just to get a feel of the area. We had lunch on the trail. Found some nice water crossings again and a water hole that we decided was worth revisiting on the next ride.

Black did a lot of trotting with John. John and I ride nothing alike and I felt bad for the colt -- John is pretty heavy handed & they struggled. At times I thought about switching horses with him, but I wasn't sure he would get along with Windy either -- it's been a long time since he rode her. Had McCain not been doing so well on Ginger, I could have had him ride Windy and John could take his own horse back. On day 2, McCain would have done fine on Windy. Ah, the ponderings after the fact.... Had some moments when my boys would fight... gawd, I love to watch fighting on horseback -- NOT! I could have taken my reins and popped them both. But hated to ruin a good ride... :)

On the all weather trail close to camp, Rich put his horse into a fox trot. Windy stayed right with him. GPS showed 9.1 MPH. We started up again when the rest caught up; this time Windy in the lead. I moved her into an extended trot -- never once breaking into a lope.... 9 mph, 10 mph, 13.1 mph at a trot! Someone asked us to hold up, so I brought her back down. Quite a rush!

Later that evening, John and Tammy Musil, Rich and John and I went out for a quick ride until dark. The gaited horses did their thing, John and I lingered behind. When we felt the need, we'd lope to catch up. When we got back to camp, we played in the arena for awhile & then made it back for campfire.

The park provides hitching posts for up to 6 horses (provided they get along) at each campsite. We tied their leads as you would if tied to the trailer. Put Black and Windy on one side & Ginger and Butter on the other. Was glad to see that (at least) Butter had laid down over night.

I was disappointed to find the horses sore a bit sore this morning. It had to be from the all weather trail. Butter was very soft on her right front and although not as obvious with Ginger and Windy, they chose to walk on the grass next to the trail instead of on it -- so assume they were a bit tender, too. Black is shod, so he didn't have any issues. I had said after leaving Ft. Rob, that I wouldn't shoe for Ft. Rob if I ever go back; let me tell you, I was VERY surprised to find them sore from this type of riding. I'm not sure I would go back to Brushy Creek without shoes, just because of that all weather trail.

This morning, Musils packed up to leave and we rode back out with the Newbergs. At the first opportunity, we moved into the interior dirt trails. The horses traveled a lot better off the all weather trail. We went back to the water hole and played. The kids stripped off their shirts and boots. Case stood on his saddle and jumped off Butter into the water. John and Black had a real good ride.

Ate lunch when we returned. Broke camp and headed home. Pulled in around 7-ish tonight; unloaded the horses and coolers and crashed. I enjoyed Brushy Creek, but even more, am in awe at what Iowa's Dept. of Natural Resources (DNR) does to accommodate equestrian activity in their parks. From trails to camps, it is darn near perfect!

And now, about The Black. I think I have come to the conclusion that it's time he goes. Not so much because of anything he did, but just lack of time and know how. We trail ride. That is what we do. And to get a horse seasoned on the trail, you need to ride them, work with them, put time on them. My family is riding less and less. I primarily ride Windy, but certainly don't mind riding the other horses periodically to keep time on them. Butter is getting very buddy sour with Ginger and although Case handles her, she has shown some very nasty behaviors and its getting worse. There just isn't enough time for me to keep my horse, work with Butter, work with Black and put time on Blue and Ginger. I think the decision is obvious and I think McCain sees it, too.

I'll work with Black this fall, use him at lessons at Brenda's and try to get as much as I can going with him so he has half a chance. But as of today, I think he is for sale... Not an easy decision. As I've said many times, it sucks to be the grown-up.....