I’ve watched with interest as my left leg has turned every shade of black and blue. It is still swollen, but not really painful. The color has “leaked” down to my ankle and along my heel. I’ve shown it to as many people that are interested in seeing it! The badge of honor or a sign of craziness… I’m not quite sure.

That left leg of mine has sure taken a beating. Starting with the roller skating accident almost 10 years ago and then Ginger stepping on it and breaking it again in 2005 to this most recent accident! I guess we’ll know where the arthritis will set in first!

On Monday, I pulled Windy from the corral and took her over to the trailer to feed her. (She is getting some special feedings now to prepare for some long fall weekend riding trips.) As she ate, I groomed her. And then felt the overwhelming urge to ride. I saddled her up and swung my leg over. Nothing hurt bad enough to prevent me from riding. And together with Ritz, we headed down the road.

Incidentally, Ritz had been banned from road riding with me up until this point. He was doing awesome until the spring calves were born. And then he took chase. The cow owner’s dogs chased him away before he did any damage. Heck, I was high-tailing it down the road. I wasn’t going to claim him if the farmer came to investigate. “Dog?” I’d say, “What dog? Oh, THAT dog. Nope, don’t know him.” 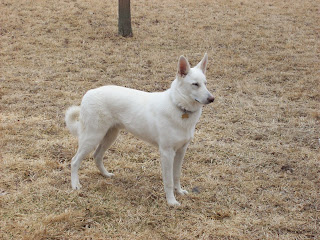 Anyway, I knew the calves had been weaned as I heard them singing their mournful choir for about 3 days ago (in a corral in the opposite direction), so Ritz was invited to participate once again. I rode Windy down the roads for about an hour. Stopping to let her graze in the ditch before returning home. I could walk and lope without much pain; the trot was a bit more trying, but doable.

Tonight we start fall lessons with Brenda Messick. Although I will probably take Windy tonight, I haven’t ruled out taking the Black to lessons sometime this season. I am not necessarily scared to ride him; I’d always been cautious before. The bucking incident caught me off guard, but I don’t think it is the way things are meant to be with him. And quite frankly, I believe I have made progress with him. I joke that its always more steps back than forward, but I need to stop saying that. It isn’t necessarily true and we have made progress. This past episode may have helped me choose his ultimate destiny, however, as there is only so far I can take him. But he will go backward again if I do nothing more with him.
- September 17, 2008