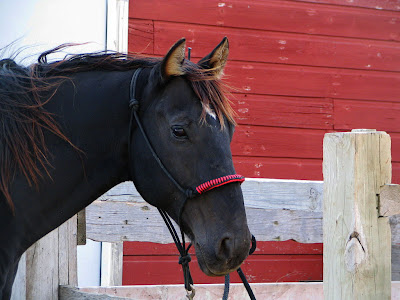 I have spent a lot of time on this blog talking about working with Black or riding Windy that I feel I’m a bit neglectful where the other horses are concerned. Not just in working with them, but talking about them, taking their pictures – bragging or cussing – whatever the situation warrants. Since Blue photographed so well for me this past weekend, today’s blog will be his.

We’d only had Ginger and Baby a few months. I don’t know that we planned on getting a horse for each one of us, but I had grown afraid of Ginger. We bought an old mare for the kids and started looking for something more appropriate for me. We found a pretty bay saddlebred mare. She rode nice for the owner; she rode nice for John. I rode her about 100 yards after purchasing her and dismounted. I would rather take my chances on Ginger. That is when John said, “Are we doing to do this horse thing or not?” 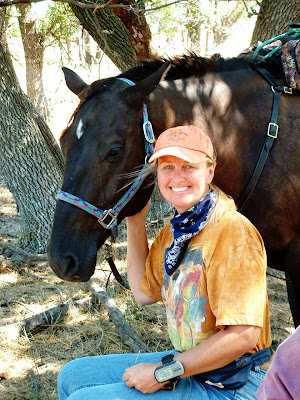 Some friends mentioned a black gelding they knew was for sale. He had spent some time with a trainer, ponied at the track for a bit – had a good start; gentle. He was a four year old. We made the trip over by Omaha to look at him. He was seemed nice. The owner lunged him and I was quite impressed! The first time I had ever seen lunging done so pretty and so successful! We took turns riding him in the arena. I liked him. I told her about my fear of Ginger & she told me (quite frankly, I might add), that if I have any problems with him, it is MY problem, not HIS! Well, I guess she told me! John wrote the check and told me “Merry Christmas.” 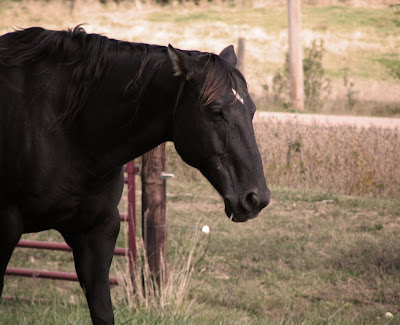 Blue’s lack of perfection probably wasn’t his fault. I think he knew more than me, but he also knew enough to take care of me. And slowly I regained my confidence. I could pull the kids up behind me in the saddle; I could go about anywhere on Blue. He became my buddy, my friend. And although I could get him to do most anything on the trail, he had (has) a couple idiosyncrasies. One can be endearing & the other maddening.

The endearing one is his spook! Now I’m not saying riding a spooky horse is cool. I’m just saying that Blue sees things differently than the rest of us and it is a game as to whether something on the trail will put him on alert or if he’ll pass with no issues. I swear, some days you could pass a mailbox with a cornstalks, a scarecrow and an American flag & the most he’ll do is try to eat the cornstalk. The next time you ride he will do a 180 over a pop can along side of the road. It is always an adventure with Blue.

What drove me crazy with Blue was his refusal to load in a two horse trailer. He will run and darn near load himself in the big trailer, but literally would throw himself on the ground over getting in a two horse trailer. Finally, I gave up. If we took the two horse, Blue just wasn’t going. It was only when the truck stalled pulling the four horse trailer & the option was to go home and get the Suburban with the two horse that I realized this is a problem. I may have to just ride Blue home. With the help of a trainer, after 7 years, he finally loads. (I haven’t taken him anywhere in it lately in it … but I THINK he will… Hmm. Maybe we had better have a refresher course….) 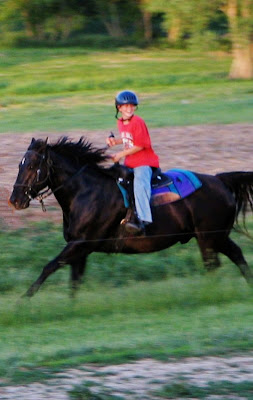 I lost Blue to my kids! I moved on to other horses because I trusted Blue with the boys and the boys spent so much time behind me on him, that they trusted him. Over the next few years, he carried one or the other of the boys on the trails. He seemed to know he was carrying precious cargo. He was who my niece would ride when she was here and other less horse savvy friends or relatives. He is who I would follow when on a young horse. I knew if heading down a hill that I could tell the kids to “whoa Blue” and his big butt would keep my young horse from taking the hill too fast or not in control. On occasion though, I would still saddle up my boy. And it’s like coming home when I climb aboard.

Blue took a hiatus last year when McCain started riding Black. I would take him out occasionally, but he saw less trail time that year than any. But when plans were made to go to South Dakota this spring, Blue once again made the travel team. I didn’t get as much time to leg him up as I hoped, but he was up to the challenge and traveled well. And he carried McCain through the Black Hills. 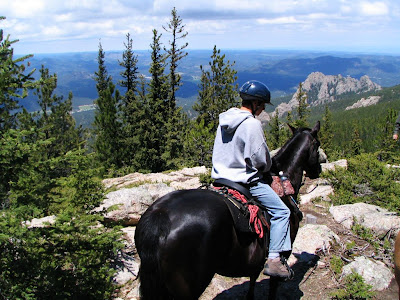 Blue is twelve years old now. This past weekend, I took Blue on a short ride down our roads. The devil got his tail a few times at what he thought were the “children of the corn” (I saw nothing, I swear!) But he relaxed when we got to a nice grassy area along side of the road and I stopped a few minutes to let him graze. We walked, we trotted, we loped. I was home again.

I’m lucky to have two great horses in my life that I call my own: my “go to” Blue and my “dream horse”, Windy.

Not horse related, but I have to share this picture! There were less than 2 minutes in the game & our team was down by 4 points. The ball was fired into the end zone to our son, Case. He caught it! We won! And the crowd went wild!! (Or at least Mom did!) 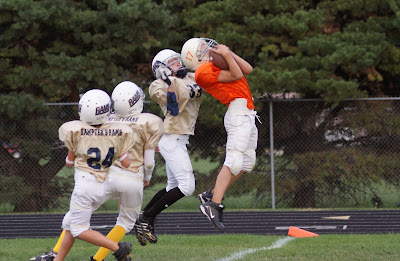 Email ThisBlogThis!Share to TwitterShare to FacebookShare to Pinterest
Labels: Blue, My Herd