Bringing in the JV

As I suspected and hoped, Windy's lameness was due to an abscess. I say “hope” because there is so many other things it could have been that an abscess seems the most benign. Not that they aren’t a pain in the butt – they are! But it’s one foot. There is no snow or ice right now. The ground isn’t frozen – it’ll be okay.

It does kind of put a wrench in the plan to achieve my new and revised saddle time goal for 2008. No fair that my partner comes up lame and at least half that time will now have to be put on another of my equine friends in the corral. Blue and Ginger certainly could use the exercise, but I should probably look at this as an opportunity to bring along the Jr. Varsity herd. Black? (Yeah… right! I'm not up to that yet.) Baby? (Not going to happen! ) 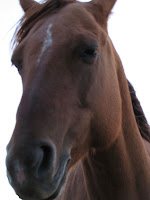 After seeing Butter’s shenanigans with Case last weekend, I think she’ll be moving up to the travel team. She was a little witch for Case (substituting the "B" for a "W" to keep this "G" rated.). Impatient and bossy. (Not what I had in mind for forty hours!) She has become incredibly herd sour. (Hmmm. Black is sounding better & better!)

On the other hand, she has an awesome little trot and is kind of fun to play with in the arena. It will be a good opportunity for her and for me. (Yeah, keep telling myself that!) Sometimes things happen for a reason...