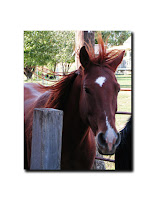 Ginger… the matriarch of our herd. Surrogate mother to Baby and Windy’s real mama. Blue’s best friend, Butter’s role model. And Black? I think he just stays out of her way! Ginger was the first horse we brought home more than 8 years ago.

I’ve told the story before…. Saw a pony in the paper but came home with Ginger instead. Then a three-year-old filly, we were told quarter horse but learned later she was sired by an appaloosa. (She would rather we not mention that skeleton in her closet.) A pretty mare. A true sorrel – almost red at times thus nicknamed "Red" by our farrier. 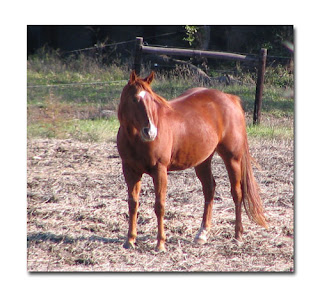 It was a little over eight years ago that we bought her. Ginger is now 11 years old. Primarily John’s horse, all of us ride her. Initially, she scared the hell out of me. She was quick; she would toss her head, grab the bit and go. I was scared she would buck or bolt, but she never has. But if you open her up, you had better be prepared to go. I did that once, when there was a snake on the trail, and let me tell you, that was a rush! (The run, not the snake!)

I never know how much of Ginger’s personality is just Ginger or the Ginger/John combination. She’s a different horse when John rides her verses the kids or I. When John rides her, she has to be at the front of the herd – no horse should even think of getting past her nose. And if they are closing in on her, you can see her eye watching them as she picks up the pace without breaking gait. But with the kids or me, she will settle back with other horses. With John, she has two gears: walk fast and gallop. With the kids and I, we can get a nice walk, trot, and lope out of her. Personally, I think she likes to play games with John as much as he likes to play games with her. They are quite a pair. 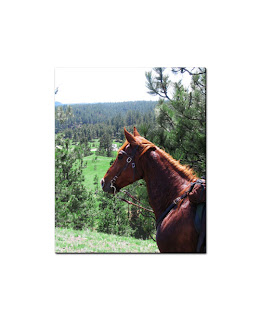 Ginger was born to run. I have never seen a horse enjoy the race like she does. With full trail gear, she will go into high speed and will not slow until pulled in. I truly think she would die running if not asked to stop. She is breathtaking to watch in the pasture running ahead of the herd, tail flagged... but always watching who is coming up behind her.

Although she was never “my” horse, I love her like she was. Many good horses – probably better than she -- have passed through our pastures. But none that have the moxie or the spirit or the grace or the heart that Little Red has. Nor could they run like the wind.

Email ThisBlogThis!Share to TwitterShare to FacebookShare to Pinterest
Labels: Ginger, My Herd