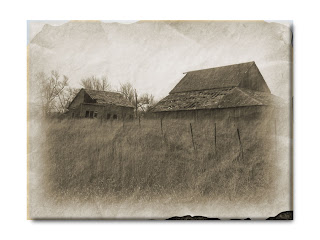 Both my mom and dad came from farming families. Not big farmers – I guess in their day it was just enough to keep the family going with very little land or equipment. Dad was born in Riverton, but his family farm was across the Kansas line. My mom’s dad came from Germany when he was around 18 years old and settled in Nuckolls County, near Superior on this side of the Nebraska line. 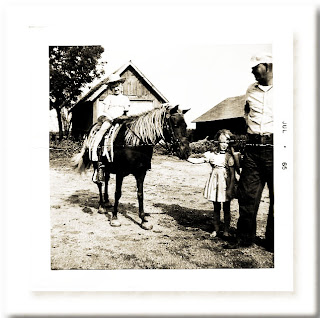 As I grew up, I always mentioned that I “had horses as a kid”, but when I think back to that period in time, it wasn’t very long. Dad sold Dolly first and then the farm sold in the late 60’s and with it went the ponies and although I dreamed of getting another horse, it wasn’t mean to be until decades later.

Before Mom died, we were going through old pictures. She found the picture of one of the horses they kept on the farm when she was growing up. She still remembered his name and presumed that he probably had some sort of draft in him. During the time that Mom grew up, horses were a farm necessity and not for recreation as they are now for me. But the animals she grew up with held a special spot in her heart. The last few years she was living, she was always anxious to sit at the barn with me while the horses came up to be fed, groomed or saddled. She didn’t ride, but she knew them all by name. 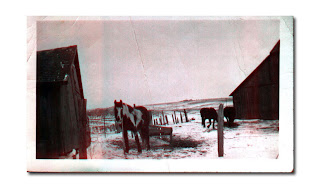 I bet my dad was a good horseman in his day. I don’t recall ever seeing him ride – probably because we just had ponies. But a picture exists of him on a striking horse. I often wonder if the horse was gray with black points or a buttermilk buckskin. In my mind it was the latter. Whose horse was it? How did it ride? Where was he going? Mom didn’t know. I often wonder if Dad were here today, would he swing his leg over Blue and ride with me. I like to think that he would.

What are missing in my horse life today are my mom and dad. Dad would have enjoyed seeing me grow as a horsewoman and amazed at how I have learned to drive the skid loader to clean the barn or hook up a gooseneck trailer and not only pull it, but back it in a tight spot. But he wouldn’t be surprised I could do it – he always knew I could do about anything. He would be proud. I miss seeing the pride my dad easily shown any of us kids.

And I miss sharing my horse adventures with my mom. Whether it be riding with friends or sharing the antics of the herd, Mom was always interested in my newfound hobby. She enjoyed seeing the pictures from the trail and hearing of our travels with the horses. 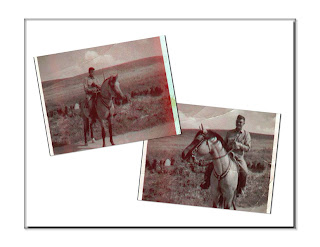 There was no birthday or anniversary that triggered this melancholy. It could be the frequent pans of apple crisp I have been making lately using my mom’s recipe, the evenings with the family at the football games or the smell of the house that first evening the furnace was turned on this season. All are reminiscent of good childhood memories. Dad has been gone since 1994 – a few months before my oldest son, McCain was born, and many of you will remember that Mom died in early 2005.

I think of them often and miss them very much. I just wanted to remember them a little longer today.
- October 21, 2008