Several years ago, I joined the American Quarter Horse Association’s Ride Program. Although Blue is my only registered quarter horse, shortly after I joined, AQHA expanded the rules to include an “all breed” program, so any hour I spent riding can be recorded in their program. At about the same time, the Nebraska Horse Trails Committee kicked off the Trail Time program, which also provided a venue for recording hours spent in the saddle.

I’m motivated by goals. Not so much goals set by other people, but goals set by me and for me. I’ve succeeded in quitting smoking and losing weight by these stringent goals. The key is it has to be something that I WANT to do, not something that someone is telling me to do.

Since Trail Time began, I set a goal of 250 hours of saddle time per year. If I’m going to feed them, I’m going to ride them. And for the last couple years, it has been a push to get those 250 hours in. I’d be begging friends to ride with me in December to make the grade! It was never work to ride 250 hours, gosh, what better way to spend time than riding, but with the job (and the travel it often requires), kids (and their 101 activities), and the weather (too hot or too cold), it sometimes proved challenging.

I’m excited that this past weekend, I have already reached my 250 hours and am on a quest for 300 hours! What changed? Weather, for one. We had an unseasonable mild summer and I found August, which is usually too hot to ride much, one of my higher months. Nine days of vacation with the horses also added to the accumulation of hours. But quite frankly, having a horse I WANT to ride and enjoy riding makes all the difference. 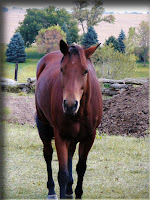 You already know the story of My Dream Horse, so won’t bore you again with the details. (“Windy, Windy, Windy,” in my best Jan Brady voice). Yesterday, after I rode her almost three hours at Branched Oak, I saddled her up again to go fetch our small cow herd (5 cows and a rented bull). And after we moved the cows with just the help of McCain on the ATV and a directionally challenged German shepherd, we rode the fence lines of our pastures and fetched Butterscotch who had went into the wrong pasture (it’s much harder herding horses than cows). I told John it is the coolest thing to have a horse that is so easy to ride. She makes striving to ride 300 hours, easy!

The Trail Time program was established to give the Nebraska Horse Trails Committee had an idea of where Nebraska horse trail riders are riding. And the funds from dues are used to support trail enhancement programs in our state. Supporting the program through dues or data continue to help the Trails Committee in improving the horse trails in our state.
- October 12, 2008