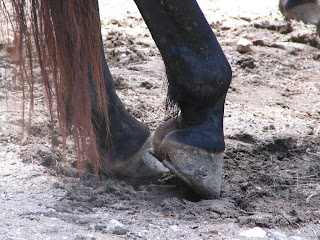 The vet said to keep Windy’s bandage on for a few days which gave me time to order some supplies for repacking rather than make a mad dash to get to KV Vet before it closes in the afternoon. I got the wrap and poultice a day later than I expected, so the bandage really needed to come off tonight. Regrettably, I begged off a friend’s party so I could tend to my mare.

While waiting for John to get home to help, I fetched Black from the corral, brushed last week’s mud from his velvet black coat and picked his feet. Then applied hoof dressing to the vertical crack I have been tending. Although I didn’t have a plan to ride when I first went to the barn, all the right signs were telling me to give the colt a chance again. Saddled him, fetched my helmet and we went to the round pen.

Warmed him up and saw no signs that told me I shouldn’t proceed with the plans to ride. Case was outside on the trampoline, so if I were to get thrown to my death or at best, break a limb, I would be found quickly. (I think.) Asked for forward motion & he moved off nicely. Brenda tells us if we point the head, we need to also use our legs. Also look ahead and not at the horse. Got some nice results from him tonight.

Unsaddled Black and tied him to the hitch. Butter ventured up to see what he was doing. I went into the barn to pick Windy’s stall when I heard a commotion. Baby cornered Butter and was kicking her. Butter was in a place she couldn’t escape. I grabbed a big leather halter and popped Baby with it and she moved on. They’ve been together for four years. What brings on this gnarly behavior?

Removed the wrap from Windy’s foot and sat with her as I soaked it in Epsom salts. She is so quiet. We are content in each other’s company. I stroke her leg and she bends down to check on me occasionally. I dried the foot, put on the poultice and wrapped it thoroughly in vet wrap. If it weren’t for peeling the duct tape, I wouldn’t have needed John’s help.

I can’t give shots. Needles are another phobia of mine. Snakes, bumble bees and needles. So John has been giving her a shot of antibiotics each day after I leave for work & he reports that she does not like it. This morning he wasn’t able to get the job done and he needed help holding her. So much for our quiet time! I got four toes stepped on before the meds were administered! And I wasn’t holding the needle!

On the way back to the house, Butter came back up to the fence. I still had a treat in my hand. Reached through the fence to feed it to her and saw Baby making her way over. I took my eyes off my hand for just a moment and CRUNCH, she missed the treat and got my finger! It’s the closest I came to crying in pain in a long, long time.

Two hours and four bruised toes and a bitten finger later, the herd is settled in for the night. We do what we do because tomorrow we are having a rare, almost 70-degree day. It’s time to ride!
- October 29, 2008