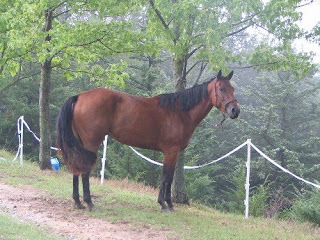 Today I pulled Windy from the mud and the muck. Scraped the big pieces of dried mud, picked the mud out of her shoes, tossed the cordura saddle on her & headed away from the barn. As we crossed the mud rock in our driveway, I felt her misstep, but nothing she hasn’t done before and never thought much of it. She wasn’t real excited about heading down the road, but did. We trotted some, but mostly just moseyed along. She seemed grumpy.

A little over a mile into our ride, I felt her bob again. Something wasn’t right. I dismounted and tried to clean the hooves as best I could with a rock from the road. Couldn’t see anything. Walked with her for a while and kept watching her walk. Nothing noticeable. Found a better rock & picked it out some more. Got a stone out, but it shouldn’t have inhibited her in any way. When I got home, I lead her around so John could watch her walk. He couldn’t see anything. But I know her so well and something wasn’t right.

I put her in the round pen. It is sandy and much drier right now than the pens. We were gone this evening and when I returned, I found her three legged lame on the leg that I felt was suspect. I replenished her hay and blanketed her for the night as the wind has picked up and there is no break from it in the round pen.

Seems to have the characteristics of an abscess, although founder has crossed my mind. It's just after midnight right now. I will have the vet out as soon as possible tomorrow. Tonight, I worry.
- October 26, 2008