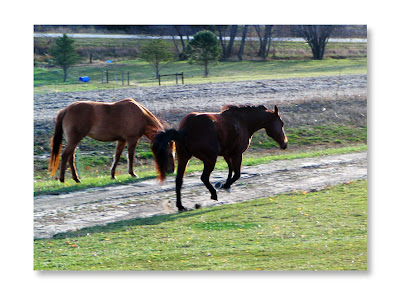 Windy’s been on stall/run rest for 21 days now. I am no longer soaking and wrapping her foot and she hasn’t taken a lame step on it since the day after the vet opened the abscess. Yesterday we brought home our first load of alfalfa for the season. John was up earlier than I was and went out and gave the herd a sampling. When I went out later, Windy was nibbling on her flake. I had decided to let her graze in the yard today and opened the gate to her run to invite her out for a bit. I wondered if she would leave the alfalfa for a little freedom? “You betchya" she did!”

She walked out of her run like it was no big deal, gave a couple snorts as she passed the corral with the other horses and then started her high step trotting; you know the one where they just look like they are suspended in air. She then flagged her tail doing her best Arab imitation and started to run. Then she would stop and eat and then run again! Later I caught her rolling. We always say for every complete roll over, they are worth $1,000. Case and I watched and counted: $3,000 today! She got up, shook, ate a moment… then lay back down and rolled another time. $4,000! Her new record. She got up the second time and with warp speed, headed off around the house. 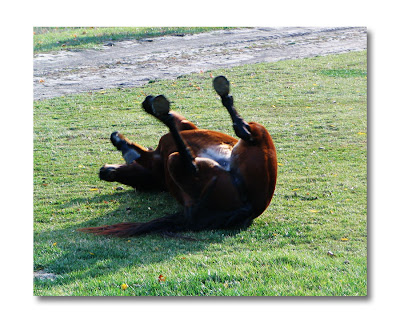 The beauty of the horse in play (or flight) takes my breath away. It truly is a dance. Do they know they are performing? I like to think that they do. But then, I try to attach human emotions to the horse all the time. My horses even have voices. I think I’ve mentioned that Blue sounds like Elvis.

Tomorrow is supposed to be close to 55 degrees. Yes, one of those days I have been tracking on weather.com and hoping it didn’t change. As of right now, it looks good. Since this is the first weekend of rifle season, the roads and trails aren’t safe. We’ve decided the only place in the near vicinity is Wilderness Park in Lincoln. It’s still in city limits and far away from any hunting. I’m looking forward to spending the afternoon riding after having such a long, cold, wet week. I was half tempted to take Windy, but why push it. Another week or so will help in the healing and it’s not like there aren’t other horses here that need the time. I’ll probably take Blue (just a hunk a hunk of burning love!) so I can accumulate some AQHA ride hours on him and perhaps take a few pounds off him. He is wintering well. 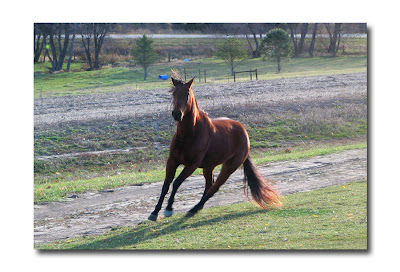 I hope you never lose your sense of wonder
You get your fill to eat
But always keep that hunger
May you never take one single breath for granted
God forbid love ever leave you empty handed
I hope you still feel small
When you stand by the ocean
Whenever one door closes, I hope one more opens
Promise me you'll give faith a fighting chance
And when you get the choice to sit it out or dance
I hope you dance
I hope you dance