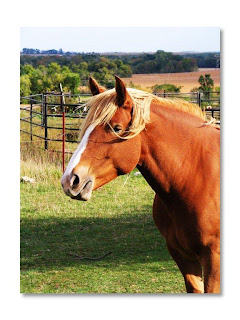 We were on a mission to find a horse that summer day in July of 2000. The pony we had hoped to find for the kids, didn’t pan out. But heck, who needed a pony. Let’s get a real horse! Never mind that we had no fencing or a barn. The owner of the pony referred us to another person who referred us to yet a 3rd person who may just have the horse we were looking for!

So we find ourselves literally “seeing a man about a horse”. We pull up to Cowboy’s yard in our Lumina sedan unannounced. He was a friendly enough fellow. “Sure, I got some horses for sale,” he said as he brought up a half dozen or so from the pasture. After deciding on Ginger, I thought our mission was accomplished. But John is continuing to ask questions about a weanling that was among the herd. “Part draft,” the cowboy said. Walked us over to another pen and showed us the dam. This grade mare of quarter & Belgian decent was bred to a full-blooded Belgian and the filly was the result of that breeding. I knew what a quarter horse was. A “draft” to me was a Clydesdale but this weanling had none of those characteristics. I couldn’t believe my ears when I heard John say that we would take the weanling, too!

We named our little baby “Dutch”, but because she was “the baby”, she is still known today as “Baby” or “Baby Dutch”. I learned quickly what a Belgian was as I watched this young filly grow bigger and bigger. Those feet, my gosh, were huge! But everything I read about the drafts lead me to believe we would have an easy horse – big – but gentle and kind. And that describes our Baby to a tee.

John has introduced her to driving by simply pulling a skid. She carries the chainsaw behind the saddle when we do trail clearings. She plods along in the Saunders County parade each year and loads up for an occasional trail ride. Under saddle she has a flotty trot and a large step but could really use more time for finesse. She ranks right under Ginger in the herd and can be a bit of a witch to the younger mares.

Last night, I rushed home from work eager to take advantage of this unseasonally warm weather. Baby hasn’t been ridden since..... I don’t know when. And having put a few pounds on the last week or so, I could use a good workout that the big girl offers -- from tossing the saddle way up there to posting her big trot. After saddling, we head to the arena.

We rode the rail at a walk and moved up to a trot. Thought about a small jump over the telephone pole obstacle, but she just plods over it instead. Her whoa is pretty good, but she doesn’t work very well off the leg. Sometimes she gets mixed messages from me or is just being obstinate. Whatever the case, we turned a corner in the arena and she took it wide. Rather than continuing, she turned into the fence and I found her big head over the top wire of an electric fence and that fence was on!

Now don't ask me how an electric fence came about in my arena. It has to do with my husband, his cows and his rented bull. His answer to my objections when I first discovered the hotwire was, "Unplug it when you ride in the arena!" Oh, I'll unplug it alright ... and then snip it with wire cutters!

But meanwhile, back to the story.... Baby backs well and I knew I could back her off the fence, but I also knew it was likely she was going to touch that fence in the process. I didn’t want to be on her when that happened. My little voice shouted, “Bail!” and I swung my leg over. At the time her bit touched the electric fence and I heard the “snap”, my coat became hooked on the horn of the saddle. She turned into me and headed across the arena with some half-hearted Belgian bucks with me hanging on her side. I managed to pull myself back up and pull her in. Neither of us too worse for the wear! 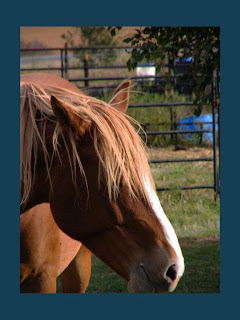 Baby turned 8 years old this year. We don’t need a draft horse. We don’t plan to drive. None of us are very keen on riding her. John always says that if we were starving, she would fill our freezer. (He’s kidding, I think!) So I guess she remains a fixture in our herd. The big girl makes me smile.
- November 04, 2008

Email ThisBlogThis!Share to TwitterShare to FacebookShare to Pinterest
Labels: Baby, Falling Off, My Herd