The Ride of Their Life 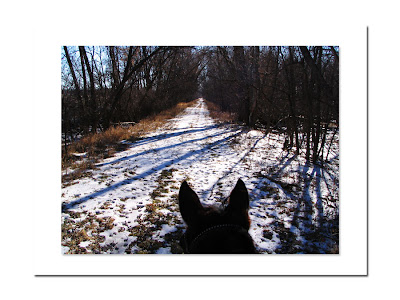 The temperatures were predicted to be in the forties yesterday. After living through winter hell lately, Julie and I couldn’t make plans fast enough to hit the trails. Sheila didn’t have enough time from her dog sitting job to fetch Cooper and trailer over, so I offered to bring Butter for her to ride. I told Julie I would meet her at 12:30, but left a little bit earlier than planned so Sheila would have some time fitting Butter with her tack.

I haven’t had the trailer hooked up since before Christmas and was annoyed with myself at how many times it took me backing up before I got the truck lined up with the hitch. Am I out of practice or what? When finally there, I got out and lowered the trailer onto the ball, plugged in the lights & brakes and hooked up the chains. Remembered again that John lost the hitch pin when he borrowed my trailer to take the calves to the sale and I still hadn’t replaced it. Case came out as I was finishing up. Chatted with him briefly and then got in the truck and pulled the trailer ahead to the driveway. Opened the doors and went and fetched my horses.

I love my little trailer. It is a 1994 Sundowner bumper pull, two-horse straight load. It is a well made steel trailer, big and roomy and just what I was ready to drive to Texas to buy when a friend found the identical trailer only 70 miles from me for half the price. And since I got it two years ago, I rarely pull my 4-horse trailer anymore unless we are camping or I’m hauling more than 2 horses. My plans when I got the Sundowner was to pull it with our Suburban, but John uses “the Burb” quite frequently for his work, so I pull my Sundowner with the one- ton Chevy truck. A lot of truck for a small trailer, but it’s all I have. If I can get 11 mpg diesel pulling that, I’m happy! Well, not happy but as I said, it’s all I have. Butter and Windy load easily and start munching on the hay I had Case put in their mangers. Although I never tie my horses in my big slant load, I always hook them to trailer ties in this trailer. I don’t want them trying to get their heads over to the other stall. I closed up the bunk doors, got in the truck and headed down the highway. Two Rivers is about a 30-mile drive.

I’m about 10 miles from my destination and chatting with Robyn on the cell phone when I cross the railroad tracks just east of Mead. Those tracks are always misleading because it looks like they have been recently redone but still rougher than crap. The trailer hits them hard. I glance in the rearview mirror and it took me only a moment to realize that something isn’t right. Robyn said I started shouting "s-bombs” over and over and louder and louder and she knew something had to be wrong with the trailer. And she was right. Something was terribly wrong. It was too close, it was out of control, it was fishtailing, and I could see driver behind me each time it swerved. They were backing off. This wasn’t good….

I tapped the brakes and the trailer rammed the rear end of my truck. I knew then that my trailer was no longer on the truck and the safety chains were my mares' only lifeline to me. I couldn’t lose them. In a flash, I recalled recently reading a recount of a trailer accident on a Yahoo list group and how the husband kept the nose of the truck straight to get control of the trailer. I couldn’t let the trailer take control of the truck. I was scared to slam on my brakes for fear of locking the brakes to the trailer and flipping it, so only let off the gas and tapped the brakes lightly. I knew I had enough truck to stop the trailer but I had to have control first and bring it down slowly. I had no way of knowing that the trailer had already came unplugged from the truck – probably with the first big fishtail – so the trailer brakes were a mute point anyway.

I continued to lightly tap the brakes and let truck take the impact from the trailer to slow the trailer down. In hindsight, I should have known then I had no brakes on the trailer, but it didn't cross my mind until later. I was wondering at that time what the horses were feeling when they would hit and then get jerked back as the trailer hit the end of the chains. Luckily, I was going up a slight hill so that helped slow the rig down, too. Finally, after what seemed like an eternity, we came to a stop on the side of the road. I got out and ran back to check on Windy and Butter. Windy looked no worse for the wear; she was standing, thank God! And no blood. Ran to Butter’s side & she had her head down munching on hay. Also standing and appeared unscathed.

The tongue of my trailer was under my pick-up and the jack of the trailer was hooked on the underside of my bumper. The chains were still intact. Julie came when I called her – I was worried I might have to unload and needed her help on this busy highway. And more than that, I just needed a friend. The pick-up that I had seen behind me passed and quickly pulled over to offer assistance. He evaluated the situation, left briefly to get more tools and returned with whom I assume was his son. They jacked up the truck to free the trailer and then got the trailer back onto the truck for me – all without unloading the girls. They would accept no payment – just said they hope someone stops to help their wives should they need it sometime. Was the right person following me or what? 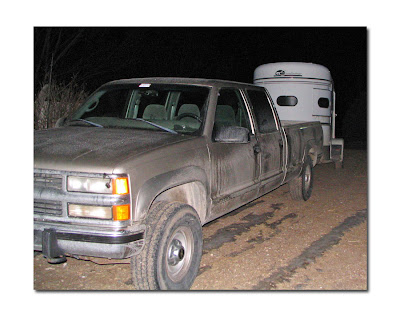 I feel very blessed that my horses and I were not hurt. I am very lucky my truck and trailer are both fine. My heavy steel Sundowner took repeated impacts with the truck and kept my girls safe. And even though I complain about my big ol’ diesel burning POS, I am so very happy it is what it is. With that long wheel base, I never once felt like my truck couldn’t handle what the trailer was doing to it. My 1998 Silverado finally lived up to his name: Hi-Ho Silver!

Oh and why did the accident happen to begin with, you ask? It's John’s fault! Isn’t that what all wives say? Okay, it really isn’t. It was my own stupidity. I didn’t replace the lost $2.39 cent safety pin. It’s my trailer. They are my horses. It was my responsibility to fix it and I didn’t. Actually, I had kind of forgotten about it until I hooked it up. 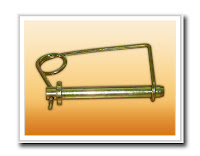 The lack of the safety pin wasn't the issue as much as what that pin makes you accomplish. Under normal circumstances, the safety pin fits snugly into the hitch once the hitch is locked into place. The pin will not go in if the hitch is not locked. Great safety feature! But if you don’t have a pin, you have nothing to test the lock. It wasn't that my lock wasn't working -- I didn't engage the lock. I simply forgot to lock the hitch. I didn’t check or recheck. I just went on my merry way. When the trailer hit those railroad tracks, it simply bounced off the ball because I hadn't locked it down. (Head hits desk over and over!) Today I bought 3 new pins. I will never be pinless again!

Bet you think we never rode after that! Did I mention the temps were in the 40’s and it was a beautiful day? Pulled up to the trail head at 12:30 as planned. I wouldn’t have missed it for the world! 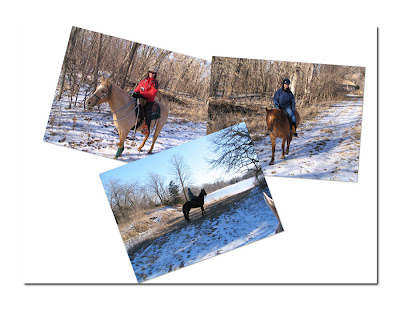