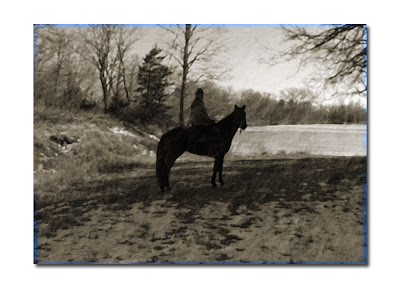 A friend was giving lessons to a young girl today and met the child’s mother for the first time. She asked the mother if she rode. The mother told my friend that she used to, but was injured on a horse when she was in high school and hasn’t ridden again. My friend asked if she still had the desire and the woman said “I’m not sure….”

I’ve written about fear before on Horsetrailriders.com Stable Talk. In brief, I went through an “unreasonable fear” phase. Now, after almost a decade of riding, I still have my moments. But the things I am fearful of are within reason. Rather than being afraid, I call it “being careful.” I’m careful about what horse I ride, where I ride and who I ride with. I learn to listen to the “little voice” that has proven to be right more times than wrong. Call it intuition or EF Hutton – I listen.

Yesterday I watched helplessly as a friend took a bad fall from her horse. It happened a second after she mounted and was totally unexpected. It was a horse she knew well and none of us, including her, saw any warning signs while she warmed him up. It was simply just “one of those things.” She’s no amateur – probably one of the most experienced horse women I know. In another incident, Lisa, a fellow blogger from Laughing Orca Ranch, is recovering from a knee injury and subsequent surgery following an unplanned dismount. And my bruises haven’t completely faded from my September accident. It happens. But I hate to see it, hear about it or be victim to it.

A nurse friend told me that medical personnel question the sanity of horse people. I can think of quite a few other activities that are equally, if not more risky. Motorcycling, snow skiing – heck, even football to some extent! But age wise, I am sure equestrian events are one of the more dangerous sports that (forgive me for using this word) “middle aged” women participate in. And it definitely is a sickness for many of us.

Even with lingering fear issues, I got back on my colt. Lisa recently made a visit to her barn. And as she nurses her leg, my friend is probably re-riding that horse in her mind, trying to find a clue to what set him off. I’m sure they are both counting the days until they can ride again. I wonder if the mother, who in her youth was injured, will once again uncover the passion which fear has taken from her and her daughter is now enjoying?

It's boots and chaps
It's cowboy hats
It's spurs and latigo
It's the ropes and the reins
And the joy and the pain
And they call the thing rodeo
- January 17, 2009

Email ThisBlogThis!Share to TwitterShare to FacebookShare to Pinterest
Labels: Fear