Just Another Day in Paradise 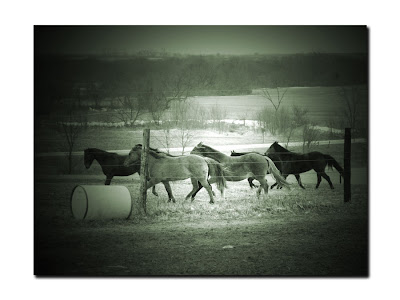 I’m pretty sure I’ve blogged about The Big Fat Lying Weatherman before today. He is the Talking Head that stands there on our television screen with a big ass smile on his face and promises us sunshine and flowers and happy trails! And before we can say “giddy-up”, the BFLWM says, “Oops, guess were in for a big one.... eh, eh, eh.” And he laughs his evil laugh!

So the truck is still in the drive with the trailer hooked up, covered with snow and ice – today’s early offering. I still have my breeches and long underwear on: too stubborn to change clothes. And here I sit with the computer in my face and a glass of red wine. The wind and snow is now hitting the window where the ice pelted it early on. The back-pedaling BFLWM quickly covered his tracks by calling for an inch of snow accumulation. (There is 3” right now, Big Guy, but who’s counting!) Aw, January in Nebraska! 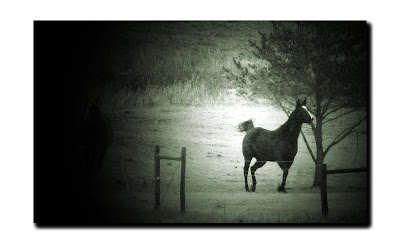 Before the storm hit, I let the herd out to pasture for awhile. They trotted through the bean field and once they hit the pasture, they gave it their all! Ginger and Windy vied for the lead, Butter did her usual buck and twist. Baby galloped, ears back – her big ol’ self just plowing across the pasture. Blue warmed up by lunging himself in the prettiest little figure 8s and Black did his best Arab imitation. I don’t think his tail could get any higher. When the sleet started, I found them back up at the barn and enticed by a bucket of corn, they reluctantly went back to the corral.

I used to think that Nebraskans had the worst winter weather of any state! But since I started reading other blogs, I find rough weather everywhere. Although picturesque, some Idaho horse-people are scooping the snow from their roofs for fear of cave-ins. The Pacific Northwest not only had uncommon heavy snowfalls, but flooding. And once the bitter chill passes through our state, it seems to offer as cold, if not colder, weather back east! I wonder what their Big Fat Lying Weatherman tells them? Compared to some of these conditions, I almost feel like just a whiner!

Rumor has it, temps could reach the forties on Sunday. I'll leave my breeches on....
But tomorrow's a dream away
Today has turned to dust
Your silver tongue has turned to clay
And your golden rule to rust (-Jim Croce)
- January 09, 2009