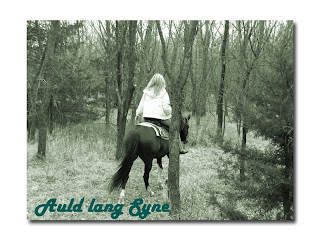 Before I start to think about goals for 2009, I like to reflect on where I have been the past year. Because I belong to both the AQHA’s ride program and the Nebraska Horse Trail Committee’s Trail Time, I keep a log of my ride time and glancing back, I’ve enjoyed the “re-ride”. 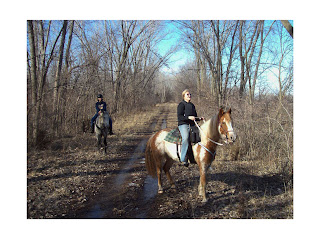 On New Year’s Day for the past seven years, 3V Stables of Ashland has hosted a game day celebration. We load up the horses and our contribution to the glutinous potluck offering and enjoy food, drinks, barrel racing and more with about 50 other riders. What a great way to kick off the ride year! Later in January, I went dashing through the snow with some friends at Two Rivers. 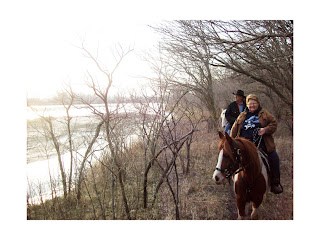 February is typically the month I get the least amount of ride time and last year was no exception. In early March, we did get back out to Two Rivers again. Then the snow came again right before the Nebraska Horse Expo. I don’t remember an Expo starting out quite so frigid. Following Expo, I took Windy to Brenda Messick of Messick Quarter Horses for some additional training. And it was like having a new horse for the Platte River Riders opening ride in early April. 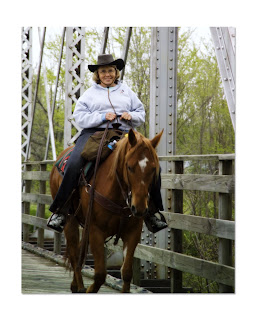 Rain came close to canceling the Friday Before Mother’s Day Ride, but alas, it didn’t rain on our parade. Once again, over one hundred women (and a few good men) rode in the annual event. I enjoyed lots of day riding in May, gearing up and conditioning the herd for our June vacation to the Black Hills and Ft. Robinson, Nebraska. 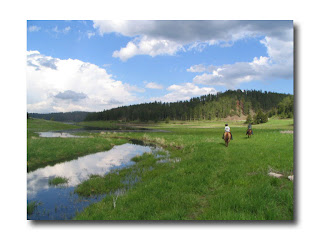 Riding to Harney Peak, elevation 7,200 feet, was the most exciting and beautiful trail I have ever ridden. It took my breath away. We kept climbing higher and higher, each step revealing more and more of the beautiful Black Hills. Our flatlander horses carefully considered each step as they moved along this foreign trail. My sons, for the first time that I recall, enjoying the beauty of this ride as much as the ride itself. And despite the challenges vacations sometimes throw out, being with family and friends in this beautiful country literally makes you leave your troubles behind. Returning through historic Ft. Robinson and meeting up with the Horsetales group was the finishing touch to this fabulous horse trip. 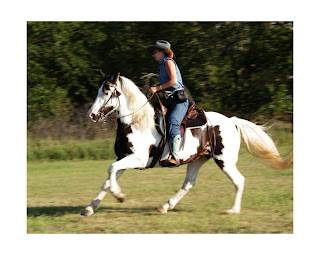 My family stayed a weekend at Camp Moses and another time, I did a mock competitive trail ride at Two Rivers. We ventured over to Brushy Creek in Iowa for the Labor Day holiday and a few weeks later was my annual Cowgirl Weekend, this year to Kanopolis Lake, Kansas. The cold weather came early to Nebraska and camping came to an abrupt end, although I managed to steal some day rides at every weather break we experienced. 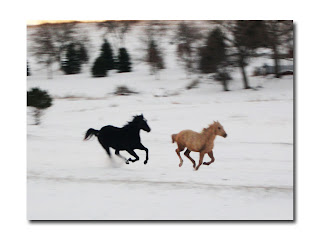 The Black Colt & GinnyBelle, as youngsters

I rode twenty different trails this year, many more than once – others for the first time. I logged just over 300 hours on 10 different horses; riding close to 900 miles. I got bucked off once and had three “semi-controlled unplanned dismounts” (in other words, great saves!) I said goodbye to GinnyBelle, my young filly and will continue to watch her grow up with a friend. I fell in love with my mare all over again and pushed myself beyond my comfort zone, not only with her, but with my young gelding. And made the hard decision that I’ll never have the time to bring out the potential that colt has to offer and hope he’ll find as good of a home as Ginny. 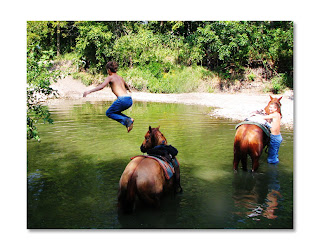 Regrettably, my husband and sons moved away from riding a little more this year. I expect I’ll lose the kids completely to other interests as they get older but by reducing my herd, I hope my husband will look beyond the work of the horses and appreciate the ride.

On this chilly winter day, the 2nd day of the year, I am already making plans for the new year. Jotting down the nearby trails I want to see for the first time or visit again. And I’ll venture on to the scale next week and see how much damage the holidays did to my jean size.

I want to wish you all a very Happy New Year. Thanks for sharing the trail with me! 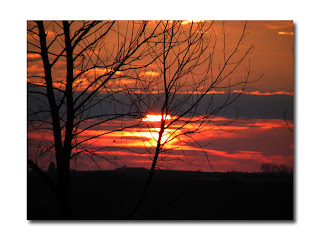 And here is a sunrise
To set on your sill.
The ghosts of the dawn
Moving near.
They pass through your sorrow
And leave you quite still...
Sitting among souvenirs.
(~Dan Fogelberg)
- January 02, 2009