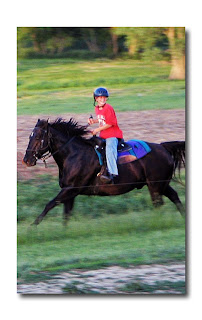 McCain & Blue - Spring 2006
My oldest son, McCain, is riding in the Richard Shrake clinic at Expo. Although pleased he volunteered, I was surprised. Even though he’s been riding nine of his 14 years on earth, he doesn’t have much interest in horses outside camping and trail riding. He is, however, very relaxed on a horse and a pretty good hand. A neck reiner deluxe! Like me, he doesn’t take a lot of chances and unlike me, is more successful at staying on the top. I remember once when he was just 6 or 7 years old and riding behind me, the horse started bucking and I fell off. I look up to see the horse running away with McCain and was amazed when he reached up for the reins and pulled him in. 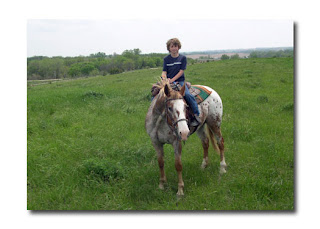 Throughout the years, he has mostly rode Blue or whatever horse I was riding. (I think he knew if I thought it safe to ride, then it was okay!) One summer he took special interest in Black and spent some time on the trails with him. The last time he rode with us, I think he claimed Ginger. One of his prouder moments was riding Baby at the Loma Trail Ride in 2005. Equipped with her driving bridle (with blinkers), a youth saddle and a very large bag (as we left her 6 month old filly at home) he trudged down the trail, through dry creek beds and up ravines. And once, when ducking under a large branch, the whole limb fell down across Baby’s butt. They just kept on going. 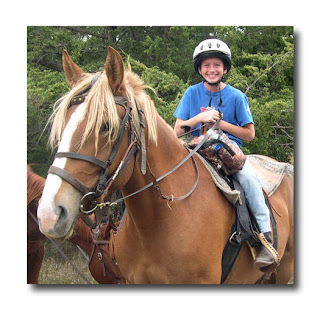 Since we are only taking Windy to Expo that is the horse he will ride for Richard Shrake. I don’t recall if and when he has ever ridden her before. So tonight after work and school, we had a little Windy 101. He picked her feet while I saddled her. We went to the arena and I showed him how to hold the reins as she is used to being ridden with both hands. I showed him how to use his feet & legs when moving the reins. I showed him the gist of turning on the forehand and pivoting on the hindquarters and the cues to back her. One cluck to walk, two to trot, and kiss to lope. It sounds like lessons were a lot prettier than they really were. He listened, but I'm not a good teacher. And half the arena was muddy. I was on Butter who was in a foul mood. None of us loped any pretty circles. But I keep telling myself, he will be just fine.

Funny story: When we first got to the barn tonight, McCain went into the tack room while I fetched the horses. He came out as I brought them up to the hitching post.

“Where’s my saddle,” he said. It has been a long time since he rode. The saddle he was referring was a 14” Wintec western youth saddle.

“I sold it,” I told him. He looked at me confused -- like how could I sell his saddle? I went on to explain being that he is a half inch taller than me, we wear the same sized jeans, and as little as he rides, I think my Circle Y saddle (which is not my primary saddle) will fit him just fine. Of course he had to ask how much I sold his saddle for, no doubt hoping he could cash in! 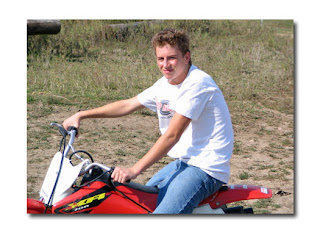