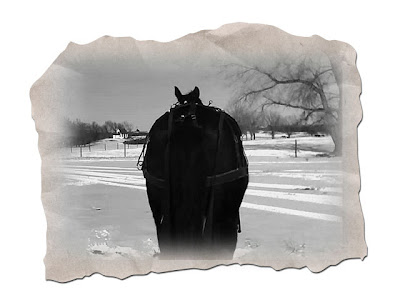 The above picture was taken by my friend, Joni. She was on a sled (not a sleigh, a sled) behind her big horse, Cody! Taken with a cell phone, it was a great shot!

Thirty-one days until spring. Although that is just a date on the calendar and no guarantee of sunshine and warmth, leaving winter behind is like shaking a monkey off my back. Last week’s snow is still on the ground albeit it’s splotchy. It is suppose to warm up next week, so we will be boggy again for awhile again. There will be plenty of mud just in time to get Windy ready for the Nebraska Horse Expo!

There was only one year in the last several that we didn’t take a horse to Expo. And I really missed it! As busy as I am during expo, it’s refreshing to take a break, head to the barn and pick the stall or groom and just breathe horse scent for a while. (Okay, so John does the pickin' and I do the smellin'!) It will be Windy’s debut year at Expo. McCain will ride her in the youth clinics with Richard Shrake. I’ll ride her in the trail gear presentation by my trainer & friend, Brenda Messick. I’ll also ride in the Parade of Breeds on Saturday night. She’ll be filler for other clinics and presentations, as needed.

I asked the boys if they were interested in riding with Richard Schrake. I wasn’t sure if either would be keen on the idea and was surprised when McCain volunteered. Since he has never rode Windy that I recall, I mentioned he will have to ride before Expo so he familiarizes himself with her. That has yet to happen, but I’ll push. I want both of them to make a good showing and hoping he can pick up some tips from Richard, as well.

The farrier was here earlier this week and did three head. He’ll be back to do Windy and Butter the week before Expo. While I was in the barn getting the horses ready, I looked closely for signs of shedding, but nothing yet. Following Expo, Windy is going to Brenda’s for a spring tune-up and then riding season will officially begin. No doubt, she’ll be slick when she returns home.

If you live in the area, let me know if you plan to go to Expo this year. An anonymous poll is at the top of the page, in the right hand corner.
- February 20, 2009