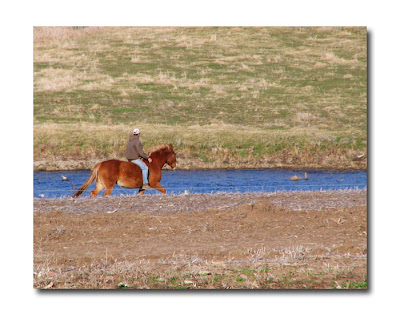 Two rare events took place at my house tonight. First, Baby, our draft cross, got her turn at going out for a ride and the secondly, John actually rode! By George, I don’t think he has been on a horse since New Year’s Day game day!

It was almost 70 degrees today, but with gale force winds. I wanted to take advantage of the warm temps but wasn’t looking forward to fighting the wind. I had already talked myself into riding Baby – she’s the only one who has had NO time at all on her lately. The last time I rode her, I took a little rock n rollin from her when we touched the electric fence, but for the most part, she is pretty mellow. Just hard to drive with the legs and you tend to have to use the upper body quite a bit. If nothing else, you get quite a workout when you climb aboard the big girl. (See Sheila, I didn't say "plow rein"!) 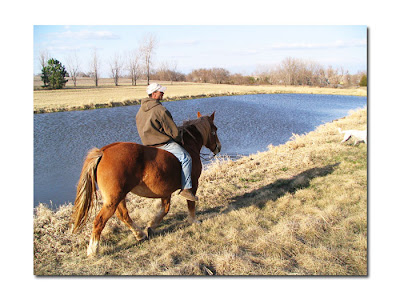 But John mentioned checking some fence and I suggested if he was going to do that, we should just ride down and check it and perhaps he should put some time on his big horse. And he agreed. I saddled Butter while he bridled Baby & jumped on bareback. I caught up with him down the hill. We rode the fence line, and along the pond and then made it over to the bog which I have Butter crossing now. Baby would have none of that! Her big ol’ feet could have tromped right through it, but John didn’t push her. 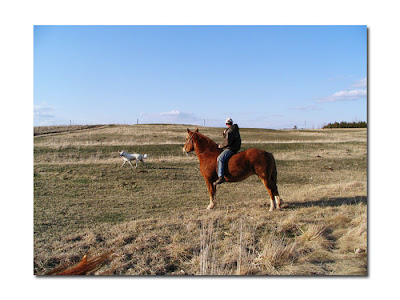 Baby is nine years old this year. We have had her since she was a weanling. We have no real use for a big horse like this but she has kind of become a fixture in this horse life of ours. So she stays. Perhaps I’ll ride her next time.

Email ThisBlogThis!Share to TwitterShare to FacebookShare to Pinterest
Labels: Baby, Family, My Herd