It’s been raining most of the weekend, but I won’t complain. We just finished a week of darn near perfect weather, riding over 30 miles. Plus, our neighbor planted our alfalfa on Thursday, so the moisture is coming at a good time.

Last weekend, I finally got John to make me a “bridge” for my arena. Nothing special, just a platform really, but it is made so you could put a log under it and have a little teeter totter action to up the ante a bit. We haven’t done that yet, but did have Windy, Butter and Ginger all try out the bridge. Most got it on the 2nd or 3rd attempt. Then we practiced whoa-ing on it and then backing off it. Pretty much a non-event for each of them. It’s just another toy to make arena riding more interesting for me.

Riding Ginger over the bridge

John and I took Ginger and Windy out both Tuesday and Wednesday night. Rode a little longer and faster on Tuesday and kept a consistent slower pace on Wednesday. I’m 3 weeks away from the competitive trail ride and John is 4 weeks away from his “distance” ride. Since Case is planning to go with John, we need to start getting some time on Butterscotch, too. One of us will probably have to start ponying her if Case can’t ride with us.

On Friday, Sheila, Julie and I loaded up and headed to Bader Park near Chapman, Nebraska. At almost 300 acres, Bader Park offers swimming lakes, camping areas and many miles of trail through the meadows and along the Platte River. We met some friends from Lincoln and central Nebraska. Our timing was perfect and we were on the trail before 11:00 AM.

The first glimpse of wildlife we saw was a jack rabbit! I guess I didn’t realize we just don’t see many here in eastern Nebraska and was amazed at how big they are! We meandered around the mowed paths and then made our way out to the sandbars of the Platte River. The river was low, but by the looks of it, I think it must always be in this particular area. There were permanent duck blinds next to the water. Once in the water, there was a good, solid base. The water was clear and in some areas, we even saw some sort of water lily below the surface. 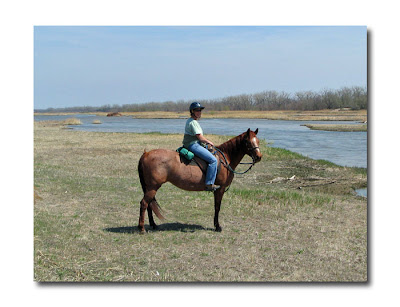 After lunch we took the trails around the lakes. Most of the trails were sandy, well marked and groomed. It was a very pretty ride. Once back at the trailers, a few of us went back to the meadows and let our horses open up a bit. Those on gaited horses did their thing and Jan and I, on our stock horses, moved into a nice lope along the grass trails. It was a nice way to end a good ride. The GPS showed we logged just shy of 10 miles.

Weather, company and a wedding kept me from riding this weekend, but having put some good miles on them this past week, I think they earned their down time. Have lots of activities this week, so will be stealing ride time until the weekend again! 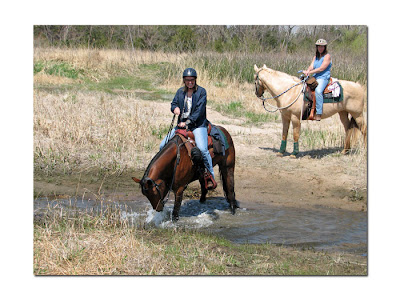 Windy & I splashing in the river while Julie Baker watches