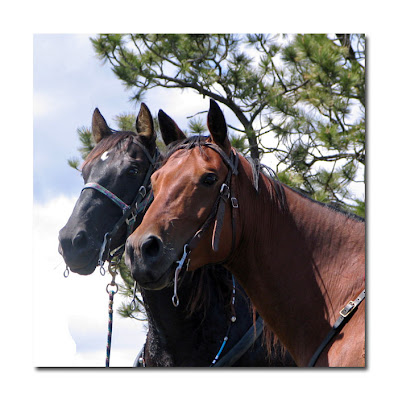 Blue & Windy
Many of the blogs I follow have recently had a list of Questions & Answers about their horse life. I wanted to play along, but I don't have a lifetime of horse memories, being that I just got my first horse as an adult ten years ago. So I revised the questions a bit, so I could play, too!

1. How old were you when you first started riding & if there was a break from when you were a child rider to an adult rider, when as an adult, did you start riding again?

I must have been around 4 or 5 when Dad got us our first pony. Don't know how long we had them -- and the one we had the longest, wasn't as nice as the first one. When I was 39, we brought home Ginger & Baby and a few months later, bought Blue. That was almost 10 years ago. 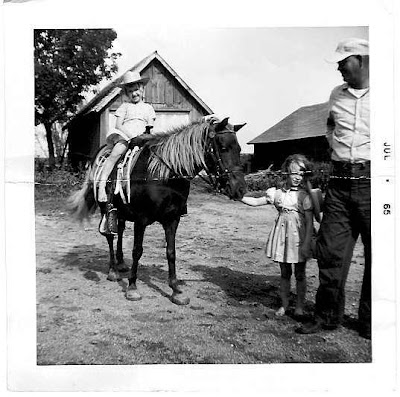 2. First horse ridden that you remember?

That same pony in #1. Her name was Dolly. She was a former carousel pony and would just trot around and around in a circle. She was chocolate colored with dapples with a silver mane.

3. First Horse fallen off of?

That would be Dolly's baby, Misty. Nasty, nasty pony. She ran me under the cattle oiler, the tree, along fences and just plain bucked!

4. Most recent horse fallen off?

I'd like to say Black, but I had that embarrassing moment at the end of my driveway last month when I fell off Windy!

5. Most terrifying moment you ever experienced on a horse?

When the thoroughbred, Nick, reared up and fell over with me on the side of a hill. I remember thinking "this is not good", as that large chestnut body came crashing down on me. Surprisingly, just bruised my hip is all. It was on a huge trail ride & I had an audience of about 100 riders!

6. Do you/have you taken lessons?

Yes. But only recently. I wish I would have taken them when I got my first horse 10 years ago. I would be so much more ahead of the game!

7. Do you ride English or western?

Western. But I do have an English saddle & have used it occasionally when riding Windy.

Not as a child. As an adult, we went to Golden Hills in Missouri which is more like "a camp" than "going camping". There were daily activities such as clinics, cattle drives, team penning and poker runs, to name a few. It was great fun!

9. Ever participated in a riding clinic?

Yes. And after every one, I say "this is going to be my last!" It's not that I don't learn anything from the clinics. I just feel like such a loser (Big L on forehead) while it is going on! And of course, my bestest, smartest horse always earns a scarlet L under their forelock, too.

10. Who was the first horse you owned as an adult?

The first "family" horses we got were Ginger & Baby. But Blue was the first horse that was truly mine. And we still have these three horses today. 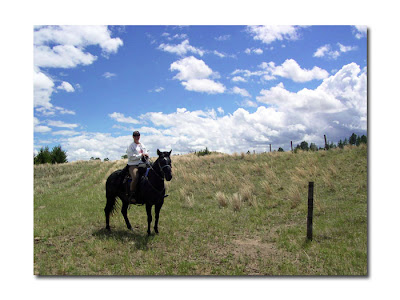 Yes. We participate frequently at the 3V Game days. I'm the one who walks or trots the games! But, but, but a few years ago, John and I did a relay race with another couple. That race goes down in the books as one of the best rushes I had on a horse. I was on Blue and he ran so hard -- it was exhilarating! We circled the huge outdoor arena at a gallop and I handed off the stick to John. Of course John & Ginger tore around that arena 100 MPH! I could just taste the win! John handed off to my friend & even on a gaited horse, she had a gallop going. We were in the money!! She rounded the bend to pass off to her husband, riding a leggy, fast quarter horse. And, and, and.... HE DROPPED IT!!! All my dreams of a blue ribbon faded into the arena dirt......

15. Have you ever done dressage?

Not intentionally! But I have graduated to jumping logs on the trail rather than stepping over them.

18. Have you ever ridden at night?

Yes. The first by accident when we went out too far at Indian Cave and didn't make it back before the sun set. It was so dark in the trees. We had never ridden there before and had to trust the horses to find the way back. They did. The first planned night ride was our Blue Moon ride at Rock Creek. The last couple of years we have rode Oak Creek on full moon nights and we now have a traditional night ride at Cowgirl Weekends.

When Ginger clipped my ankle & broke my fibula in 2005. But I am sure this past fall, if I had not been wearing a helmet when I was thrown from Black, that would have been my most serious accident ever. I have no doubt about it! 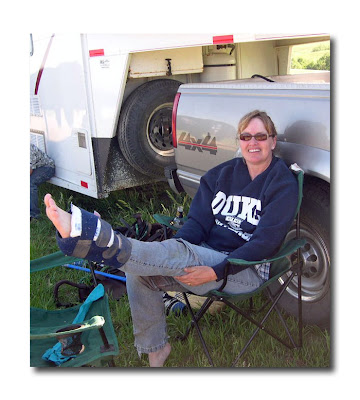 20. Do you prefer arena riding (show or games) or trail riding?

21. Have you ever been bitten by horse?

22. Ever had your foot stepped on by a horse?

Yes. Dolly. I'm pretty sure I was barefooted, too. Good parenting has been passed down by many generations! :)

23. What is your greatest horse fear?

Whether it be a buck, bolt or rear -- just losing control and trying to ride it out or hoping I don't die when I land.

24. Besides the obvious (unbroken, crazy horses), is there any horse you are familiar with – maybe even fascinated with – but would not ride and why?

And no, I'm not thinking of any horse in particular, but Arabians frighten me. Their animation and energy make me nervous. Also, very big horses.

25. What memory stands out as the most fun you’ve had on your horse?

I have many wonderful memories. Riding Harney Peak last year is probably at the top. It was beautiful scenery, the horses were awesome in what was probably their highest climb in their lives. The kids were old enough to appreciate where we were at and the beauty all around us. And we were with good friends. Yeah, that's right up there. Cowgirl Weekend 2006 at Valentine was Windy's first solo CGW and she earned her stripes. And our first trip to Golden Hills back in 2002. The leaves were changing color and the trail looked different every day. We rode for a week solid! Wish I was doing Trail Time then! 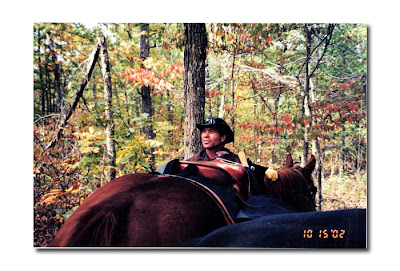 Losing Gunner in a pasture accident.

27. Moment that took your breath away?

Opening up Ginger at Cowgirl Weekend 2004 - Big Canyon. There was a rattle snake that some of the cowgirls were quite fascinated with. I wasn't. I could see Sam and some others over yonder on the next hill and a nice dirt path/road in between us. It's the first and last time I ever ran Ginger that fast. And I'll never forget the feeling. I felt like we were flying! Yes, it took my breath away!

Seabiscuit or Horse Whisperer. I loved both the books and the movies brought them to life for me.

Anyone wanting to use this abbreviated version of this questionnaire are more than welcome. Leave me the link to your blog in the comments section so I can see your answers, too.

(I'm sorry I can't give credit to the original blogger who posted the list as I don't recall who it was. If it were you, let me know in Comments & I will credit you with this fun game! ) 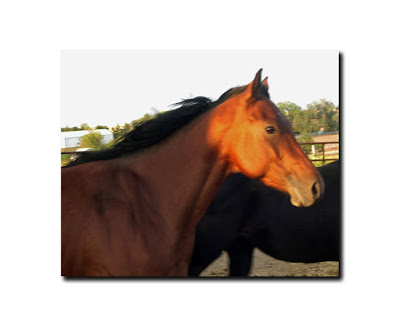