Riding with a Purpose 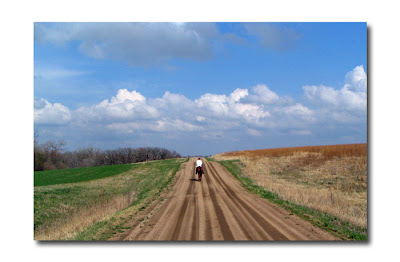 The weekend forecast promised much needed rain and the fields were wet before we even got up. So I was pleasantly surprised when the sun peeked out yesterday afternoon. Although the pastures and arena would be too wet for riding, the miles and miles of country roads surrounding us are perfect for such a damp day. I am planning to ride at a Competitive Trail Ride (CTR) next month. John and a friend are also planning their own version of a distance ride over Memorial Day weekend. So we both have reasons to get some time on our horses. Surprisingly, the horses weren’t too muddy. We chipped off the big stuff and saddled them in the light weight saddles as we planned to do some faster gaits.

We started out down our driveway and headed west at a good trot – about 8.5 – 9.0 mph according to the GPS. We would slow down and walk a bit and then pick up the trot once again. The video is NOT at the 9.0 mph pace. There was no way, no how I could have shot a video, checked GPS speed & stayed in the center of my horse! I had my helmet on, but I ain't no contortionist! This speed was probably around 5.0 mph.

Once, while climbing a hill, John kissed Ginger into a lope and we followed. John then increased his speed and started to gallop. I heard Windy’s three-beat lope turn to a four-beat as she increased her speed. I didn’t pull her in, but quietly said “easy” and she steadied at that speed. Quick glance at my GPS had us at 15.9 mph. It seemed so much faster than that! 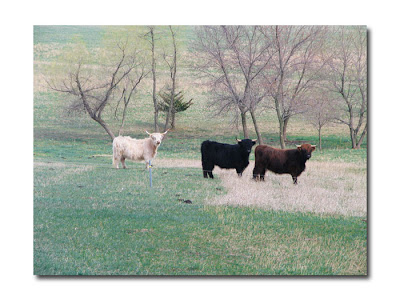 We headed three miles west and then turned south on a road which I have not traveled before. John was maybe 50 yards ahead of me when we noticed some cows out in a pasture. As we got closer to them, Windy started to snort. These weren’t ordinary cows! I pulled my camera from my pommel bag to get some shots. About this time, Ginger saw them and did a quick spin to look closer. The cows heard her and took off on a run, their long hair bouncing. I found out later they are called “Highlanders”. 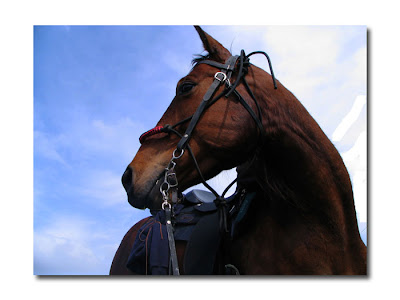 We took three five-minute breaks along our route and gave the horses time to graze in the green grass along the roads. We haven’t let them out to pasture yet so this was a treat for their hard work. We finished our ride in just 2 hours, covering 8 miles. 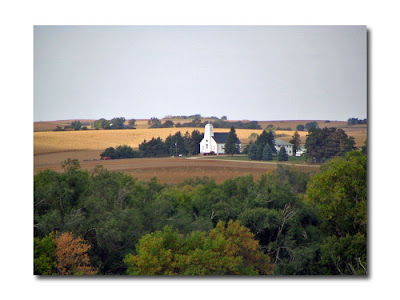 This church, Saints Cyril & Methodious Catholic Church, is located in Plasi, Nebraska. The little mission church is the only thing in Plasi! The church rectory is to the right of the church. There is also a small church cemetery. Located just 3 miles from us, as the crow flies, this view can be seen along one of routes I frequently ride.
- April 19, 2009