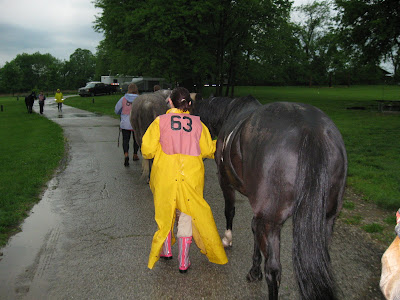 The worst of the storm hit between Rock Port and St. Joseph. By the time we fueled up and got back on the road, the rain had stopped. The sky still looked pretty ominous as we pulled into Smithville Lake.

The campground was beautiful. There are ninety sites for horse camping. No power, but water hydrants were plentiful. I felt guilty unloading Windy on such nice grass, knowing after stabling her on it for a few days, it would not be so pristine. The plan was to set up camp and then check in. But once again, the skies opened up. When I heard hail starting to hit the trailer, I put Windy back in the trailer and took refuge in the living quarters. The other girls stopped over and we had some snacks and drinks as we waited out the storm. We waited and waited and waited. 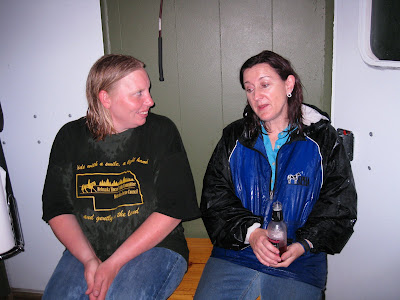 Once we got a break in the weather, we finally checked in. When it was our turn, Windy and I approached the vet judge. I was careful to have my rope held as Shari showed me, not looped, but folded nicely in my hand and stayed on the same side as the vet. “I wish all the horses stood this nice,” said the vet as she went through the check starting with Windy’s mouth. Of course, she spoke to soon. As she placed her stethoscope on Windy's stomach near her flank, her rear leg went up. Not a kick exactly, but more like a reaction to being “goosed”. I heard collective gasps from the secretary’s table and those standing around us. The Prettiest Bay Horse just lost her first point. (To Be Continued...) 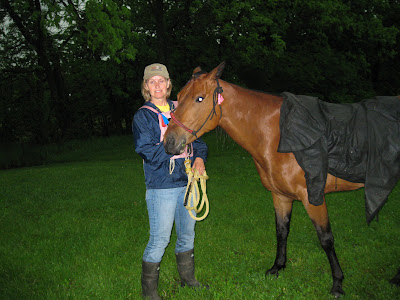