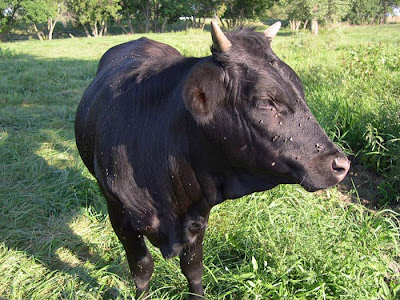 I felt my cell phone vibrate over the hum of the ATV as I was driving between the windrows of a recently mowed alfalfa field.

“I found poop,” said my oldest son. He told me where he was as I headed out of the field. I found him further down the road, the Honda Civic lights shining on what was obviously a fresh pile of manure.

“Go get Dad and Case,” I told him. He flipped a u-turn in the gravel road as I veered the ATV on down the road, scanning into the darkness. It wasn’t long before I spotted them.

Earlier that evening, we were at Case’s ball game. McCain called and said the cows got out into the yard. He said he had closed the gate to the front yard, so they would be fine until we got home. When I made my way to the dugout a little later, John wondered if the electric fence he had slid down to mow had been lifted. He didn’t seem overly concerned, so neither was I.

Several years ago, John and the boys went to a livestock sale. Their plan was to buy a pig to fatten and slaughter. They came home with a bottle calf. And she had a name: Agnes. It was spring, the beginning of ride season. So not only did we have a loud, hungry mouth to feed, we had to take the calf camping, too! It wasn’t long before the boys decided she needed a friend and came home with another calf, Cocoa. I was not amused but how could I complain about his two calves when I had a half a dozen or so horses? I’m sure we entertained the farmers nearby with our half hearted attempt at cattle ranching. The first time the cows got out, the kids coaxed a then full-grown Agnes home with her baby bottle as I pushed her along with the car. 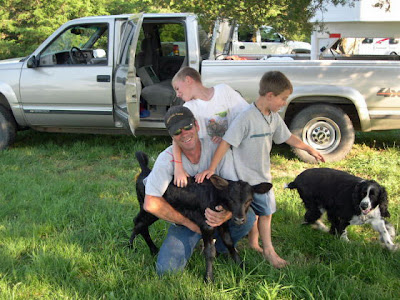 When Agnes and Cocoa were old enough, we had them bred for spring calves. Cocoa calved first and Agnes was quite intrigued with the little heifer and very protective of it. So much so that when she finally had her own calf, I was shocked to find she abandoned it! John was out of town, I was ready to leave for work when I saw the little calf lying next to the fence. I put on some coveralls and tried to take him to his mother. I was shocked when she head butted it violently out of her way. This was NOT going to be a quick fix. After calling my boss and telling him of yet another farm emergency (there have been many!) And calling a friend who could tell me what to do next, I went to town to get colostrum supplement and other supplies and started the process of bottle feeding. I finally reached John and he was on his way home. It was another summer of calf challenges!

Fast forward a few years. We now have three bred cows, Agnes, Cocoa and Hershey, and a rented bull. And upon returning from the ballgame, we found they were no longer in the yard. They were gone. I truly wasn’t worried; figured they were somewhere in our yard. So I went to bed. About five minutes later, Case, still in his ball uniform came up the stairs.

“Why aren’t you helping, Mom?” he asked. I told him I figured they had it under control.
“No, Mom. We can’t find them anywhere. They are gone.” 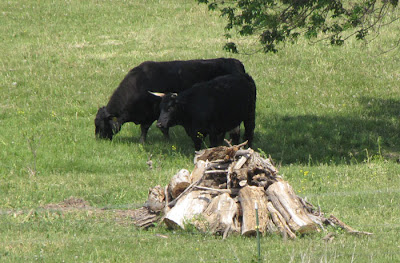 So I got dressed and headed outside thinking about how I’ve tolerated these cows because they were John’s hobby (see previous comment about my horses). I took them camping, I made a spectacle of myself herding them with the car, I nursed one of their babies (not literally, mind you!) and shared my horses’ hay. And now all I could think of was, $5,000 worth of beef just disappeared into the night. John had just driven back into the driveway after a quick check of the ditches. We’d need to get into the fields. I called the horses up from pasture.

We saddled in the dark and rode out to the nearest alfalfa field. Using the flashlight intermittently, we scanned the field but couldn’t see down to the bottom. So we rode to the fence line around the perimeter of the field. No luck. Pitch dark looking for black cows. Yep, like finding a needle in the haystack. This would take all night. We needed a better plan.

We decided to split up. John and Case, with our white shepherd, Ritz, would continue on horseback down the roads and fields to the east. I would take the ATV and run the fields to the west and McCain would take the car and head west looking for tracks. It didn’t take long for the poop discovery.

I wish I had my camera with me as I think back to my teenage son along the roadside at night, squatting on one knee between a pile of poop and the car, tracking the direction of hoof prints. My youngest son on his horse, looking far from cowboy in his baseball uniform (with cleats) while wearing his riding helmet with a camping headlamp strapped to the top. John with his coach’s uniform on his wild red horse that looked like she would rather race the cows than push them home. And the four damn bovine, standing in the lights of the ATV, grazing in someone else’s yard, looking at us and wondering what all the fuss was about. Ritz finally had an opportunity to herd them home.