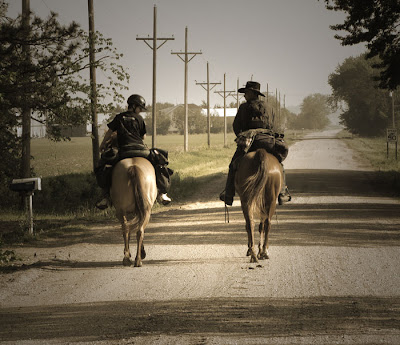 Coincidentally, this photo meets the Sunday Stills challenge: Power Lines
My husband and youngest son had big plans for the weekend. They were joining some friends for their own distance ride: a sixty mile, 3 day journey from Dodge County to Big Elk Park near Macy where they would meet up with me on Monday afternoon. We spent most of the day before packing their gear and trying the rigging on their horses. We had waited patiently for a chip in Butter’s hoof to grow out and luckily it did and the farrier got her shoed the day before their trip.

On the day of the ride, we unloaded in Ames, Nebraska and carefully saddled both horses who would be carrying much more than the rider’s weight to get everyone through the next three days. A train roared through Ames behind our trailer. I was pretty sure Ginger thought the devil had her tail. She was sweating before they even got started. At 10 minutes from departure, their friends called and said they would not be going after all. Shocked and disappointed, if they were to do this, they were on their own.

Although John and Case had packed their amenities, their friends had mapped the route. We didn’t even have a map in the truck. John knew where they planned to stop the first night, but after that, plans were vague. But they were bound and determined to carry on. I reluctantly let them go. About a mile out of town, the mother in me kicked in. How can they go without a map? Case will start whining, John will get impatient. Without their friends to break the monotony, riding 60 miles will grow old. I drove to the local Wal-Mart – the least I could do was get them a map. And headed back to where they started and followed their tracks 5 miles down the road.

I pulled over to the side of the road and watered the horses as John adjusted his gear. We sat down on the running board of the trailer to consult the topography map I had picked up. I no longer wanted to go to Macy. I wanted to be with my guys. We talked about where I could meet them, the logistics of this new ride and what I would do while I waited. Then I reminded them we had friends staying at Turkey Creek Ranch near Newcastle this weekend. Perhaps we should just go there and if John and Case still wanted to, they could pack in on their property. It didn’t take much arm twisting. We unsaddled their horses, loaded them back up with Windy and off to northern Nebraska we went! 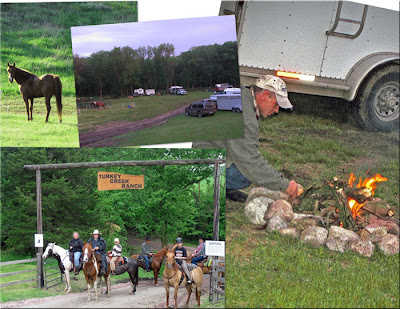 Turkey Creek Ranch near Newcastle is a little taste of paradise in northeastern Nebraska. Tucked high above the Missouri River, this pristine camp offers hundreds of acres with forest riding and scenic views. I first visited here in 2007. I can’t believe I waited this long to return! Brenda and John Wortman of Turkey Creek certainly know horses and their horse camp is awesome! Truly one of the best in our state.

We pulled in next to our friends, Rich and Kathy Newberg, and set up camp. Although they had rain, the trails were in pretty decent shape as we headed out later that afternoon! It was even more beautiful than I remembered! We climbed the hill to the cabin which overlooks the Missouri River. Then began our descent into what I call the “enchanted forest”. The recent rains left everything fresh and green.

At one point during the ride, it began to rain. I hadn’t brought my raincoat so pulled out my disposable poncho from my pommel bag & started to open it. I think at first Windy thought it was licorice & kept looking back at me – as I usually treat her to a piece, too. But the bigger the poncho got, the more disturbed Windy was. It then dawned on me that although I take coats on and off while riding her all the time, perhaps I have never used the plastic bag thingy before..... 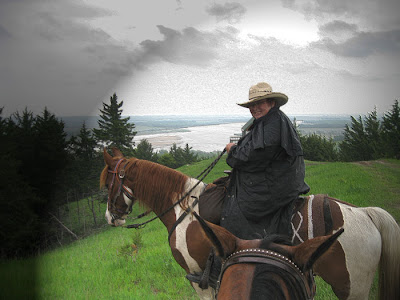 Meanwhile, Zuni - Kathy's horse - was disturbed as well, as she was putting on her rain coat. It didn't take us long to figure out he wasn't disturbed at her, but at me and my plastic bag. Although Windy was agitated, she wasn't out of control & I started moving her away from Zuni. She then started to quickly sidepass away from the sound in my hand. My instinct said to just get rid of the dang bag. My brain did not think about where I was dropping it. So what did I do? Dropped "the bomb" right behind Zuni!! Does anyone wonder how I keep my friends? Okay, so Kathy now has the eatin' dirt award thanks to me! I'll never live that one down as long as I live. 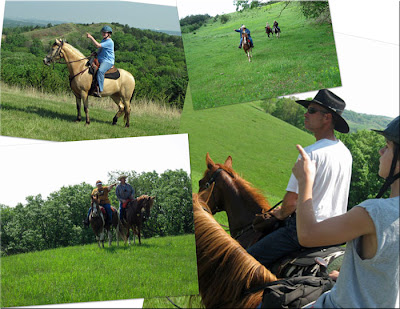 The rest of the ride was gorgeous! The rain stopped, the forest was fresh and although slick in spots, considering what we rode in last weekend, this was a walk in the park! Yesterday & today, Brenda Wortman came out and rode with us, both times on different horses, both beautiful. It is fun to ride with the owner exploring the new trails her husband is just cutting! Have I mentioned that I had forgotten how beautiful Turkey Creek is? 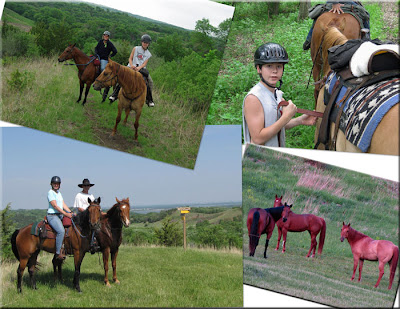 John & Case never did pack out. I think even though their plans changed, they were very happy with the outcome. The skies stayed overcast throughout yesterday, but no rain! Today the sun came out and the landscape again was a new picture in our eyes. We rode about 24 miles over the course of the last few days. Although not the weekend we envisioned, it turned out better than we planned. 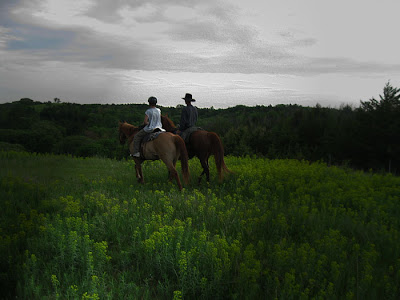 PS: This was our first camping trip without our oldest son, McCain. He’s 15 years old now and has a part time job. Although we had a very good time, I missed him terribly!
- May 25, 2009