Back Among the Living 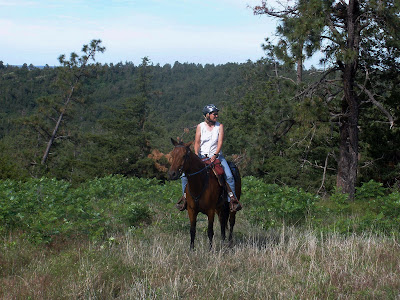 Any girl who grew up in the 70’s wanted to be Farrah. Oh, a few of you may have rather been Kate or Jaclyn, but it was Farrah that captivated men and women alike. I remember putting Mom’s curlers in my wet hair and waiting all day for my hair to dry. And when I looked in the mirror, I was so disappointed to find I couldn't emulate Farrah by hair alone. Not even close! And I’m pretty sure I wasn’t the only girl who was entranced by the poster. I mourned Farrah’s passing as I would a distant friend; someone who is not in my life but by remembering the impression she made upon it. A glimmer of my youth now gone.

When I left work yesterday, I was shocked to hear of the death of yet another celebrity of my time, Michael Jackson. Although I can’t say he left any mark on my life, I remember the first time I heard the song “Ben” and quickly memorized the words. As the day wore on, the radio showcased his career. I heard other songs I had forgotten about like, “She’s Out of My Life” and “I’ll Be There.” More memories of my another time. By the “Thriller” era, I’d already left home and as Michael’s music changed, I did, too. I’d be hard pressed to name any of his later songs. Despite the wackiness his life took on and the rather dark person he became, his music was a part of my generation and it is a bit surreal to lose two such icons in the same day.

Meanwhile, back on the farm today, Agnes was showing some noticeable signs of calving. Always the bridesmaid to the finer cow, Cocoa, it would be the first time that Agnes would calf first. For those who have been following this blog via Stable Talk you may recall Agnes’ first delivery in 2007 and her subsequent rejection of the calf. John was out of town and I had quite a time with her, especially being that I am NOT a cow person. But the next year, she graciously accepted her baby. So we were expecting a pretty uneventful birth this time.

Case told me earlier he thought Agnes' water broke and later, he and I looked up signs of calving on the Internet. He was convinced that Agnes showed all of those symptoms. I didn’t even realize he headed out the door until a few minutes later, I heard him screaming for us. “Come QUICK!” he yelled with pure panic in his voice. He was down in the pasture by the pond. I saw John coming down the ladder from the barn and McCain and I jumped in the truck and drove down to where Case was.

I found Case knee deep in the water holding the calf so he wouldn’t drown. Evidently Agnes had given birth on the slight incline by the pond and he had gently slid in. John carefully pulled the calf back into the grass and Agnes started licking him. Thank goodness she took him – I was having visions of Calf 2007 and didn’t want to go through that again! No doubt Case saved the little critter’s life. He named it Water Boy. I thought “Billy Jean” would have been more appropriate. 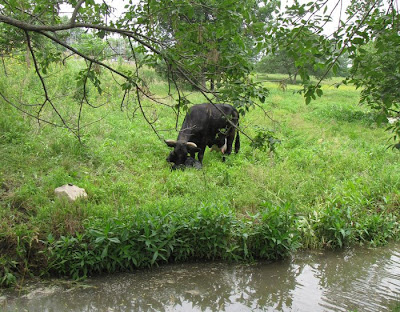 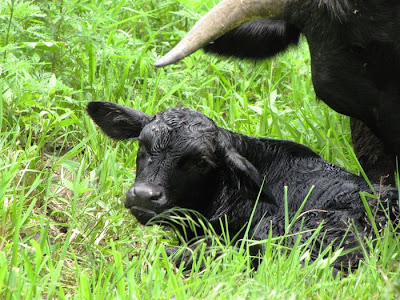 I have not been on a horse at all since I got back from Big Canyon. The heat and humidity have been very intense this week – the hottest of the season so far. I have plans tomorrow to meet some friends for an early morning ride before the heat of the day engulfs us once again.
- June 26, 2009