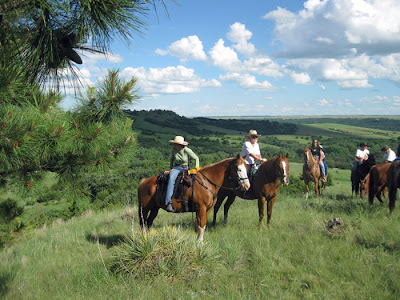 This past weekend was our 5th Annual Horsetales trail ride and the group headed to Big Canyon Inn. Located on Hwy 7 between Bassett and Springview, Nebraska - just north of the Niobrara River - Big Canyon is one of the deepest in Nebraska and filled with much western folklore, including stories of horse thievin', Doc Middleton. Fellow Cowgirl Weekender, Jo Schaaf of Atkinson, was our trail host, guiding us on the best trails and providing us with the history of the land.

The trails at Big Canyon are beautiful. You can follow the cow trails to the logging roads which take you deep into the canyon along a shallow clear creek and then climb to the top where there once was a family run ski operation. Everything was green and fresh smelling and if you listened closely, you could hear the sounds of the water coming down the canyon into the creek. 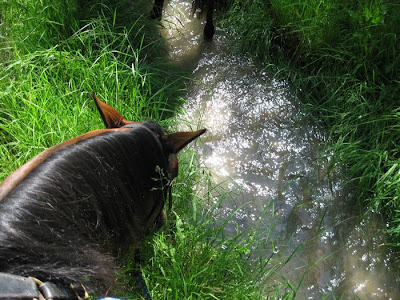 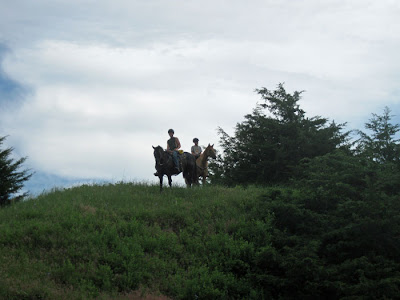 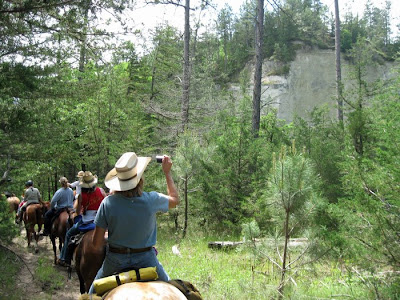 Some of the group arrived on Wednesday, but a majority of us traveled Thursday. There were over 30 riders throughout the weekend. I logged over 13 hours in the saddle, covering nearly 35 miles.

One of the highlights of the ride was watching a friend begin climbing a steep hill way above the rest of us. I watched in awe as his young arabian went higher and higher, picking herself along a trailless path. Soon a second horse joined the climb. I didn't think too much about whether we would get there or not, but gave Windy some leg to get her opinion on the climb and off we went. I grabbed her mane as she galloped and lunged up the side of the hill, picking her path as carefully as those above her. And before I knew it, we were there on top of the world! What a rush! 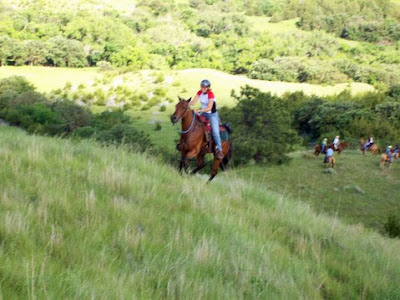 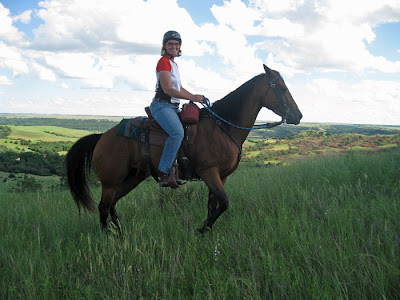 The boys had their own rush when they decided to race on the soft sand road leading back to the ranch. McCain was on Ginger, Case on Butter and John was riding Blue. Blue didn't stand a chance against these mares! Case come in second to the McCain & Ginger team. His GPS said their top speed was 40 mph! I tried to capture the race, but you quickly lose sight of them.

The sky really was as blue as in these pictures. I didn't carry my good camera with me, but kept my small Canon handy in my saddle bag and was glad I could capture it on at least a few of the shots. 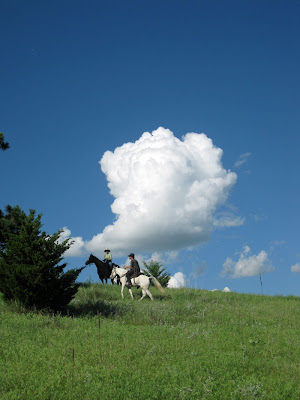 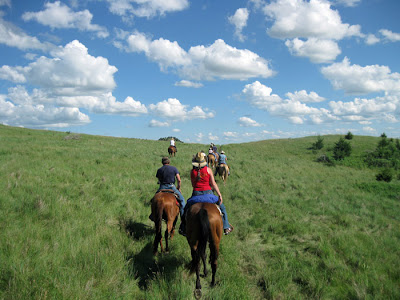 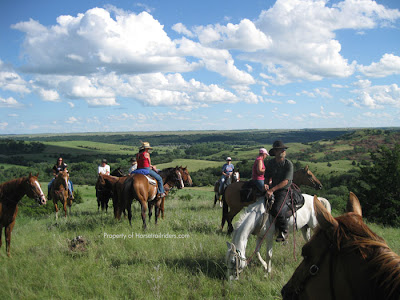 I have to share a short story from the trail. Our trail host, Jo, did not arrive until Friday. John and I have been to Big Canyon before, so thought Thursday evening, we could take the group on a short ride. Surely we could remember some of the trails from our previous visit. We'd save the good stuff for when Jo arrived.
We entered the pasture and followed the cow trail into the trees and started to descend into the canyon. It had rained the night before and the very steep trail turned greasey and then boggy. Our fresh horses -- all twenty some of them -- were rushing the trails to the bottom. We all made it down safely. But from there, we weren't sure where to go. There was another trail that took us up. And it went up and up and up. It was the old ski slope! We reached the top finally! But then found there was no way out except back the way we came in. After much folly, we ended up opening a gate and riding back to the ranch down the side of the highway. Not the ride we all envisioned! My friends "gifted" me with the following poem:

At Big Canyon this we found
We do not like steep ups & downs
We do not like them here nor there
We do not like them anywhere
Tammy said "Sure, it's flat"
But now we know it sure ain't that!
We do not like slick mud of brown
We do not like those sucking sounds.
The horses huffed, the horses puffed.
And then we said "We've had enough!"
At last the red gate did appear
We said "Anythings better than here!"
Highway riding can be fun
When you know you're almost done.
Big Canyon is an awesome place
And yet we leave
With a smile on our face!
There are stories of the trail shared among the riders. Laughter and smiles and some "oh &#!^" moments were relived around the campfire. A few days of bonding between casual friends who got to know each other a little better. Now with common memories. And once again, our horses took us places we could never go. They never let us down. 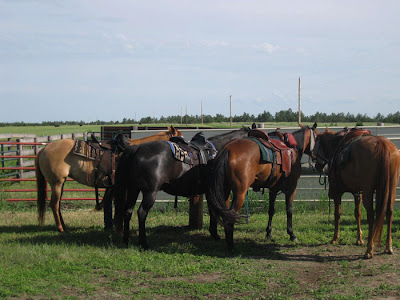 Big Canyon Inn is owned by Edith & Roger Wentworth. They were gracious, horse friendly hosts. For information about camping and trail riding at Big Canyon, please contact them at:

Jo Schaaf is also available to provide tours to your group. You can email me for her information.

This week's challenge was "tri-color". The explanation was "simply the more colors in the shot the better. It would be pretty simple to shoot a landscape and have a bunch of different colors, but look beyond the ordinary, use some composition and creativity and get some unusual colors. Take a moment and set up the shot, use knick knacks, muliple types of flowers, just about anything your imagination can come up with. Just remember the more colors the better."

I took the picture of the wind sock with the challenge in mind but was worried it was too "landscapey". While on the trail at Big Canyon, I saw a lot of wild flowers that could fit the criteria, but when riding with 30-some people, its hard to get everyone to "hold their horses" for my photo op!

As I glanced through other challengers beautiful work, I decided not to hold back. I'll use the wind sock & the picture of one of my riding friends from this past weekend - unposed - just captured in the right light and a foal with it's dam -- the gorgeous blue sky above. 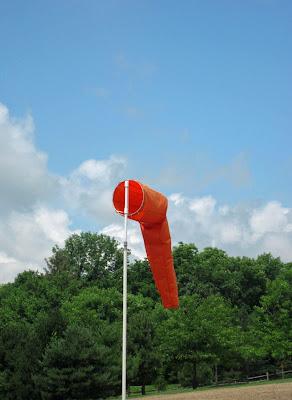 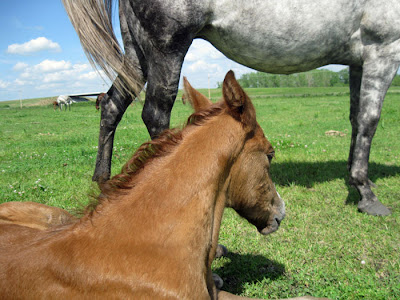 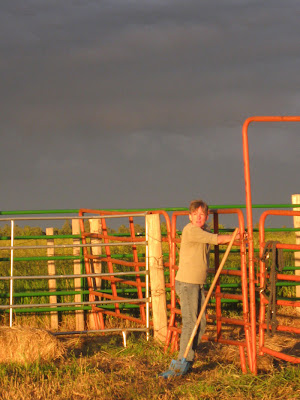