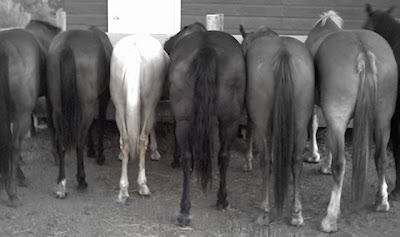 I’ve mentioned Horsetales many times on this blog. In case you missed it, by simply definition,


“Horsetales is an online group of 240 regional horse enthusiasts who communicate daily via the internet.”
Some of our spouses call Horsetales “our invisible friends.” While many of us have met in person and have become “real” friends, others remain behind their keyboard exchanging horse related chatter or simply just reading the posts. I started this blog several times – really just to tell you about the Horsetales upcoming horse camping trip -- but it always seems to be more about Horsetales than where we are planning to ride. So to get the real flavor of our group, you have to know who we are and how we got here. It all started with Horsetrailriders.com.

I first started trail riding about ten years ago and there was no one source for trail riding information in our state. Correction. There was NO source. People who had been riding for years knew what parks allowed horses on their trails and which ones didn’t. I would hear about organized rides after they were over. Someone needed to put the information out there so people like me who were new to horse trail riding could find out about these rides and trails. That someone ended up being me.

I knew nothing (and still know just a tad more than nothing) about web design but did enjoy dabbling on the computer. I figured Microsoft had something that could help me. So I bought some software and in 2003, I registered the name Horsetrailriders.com. Perhaps “if I build it, they will come.” Or not. It didn’t matter. It was a good winter project and at least I’d have something to show for the hours I would be spending in front of the computer. And it would take time…. I started to slowly put it together. 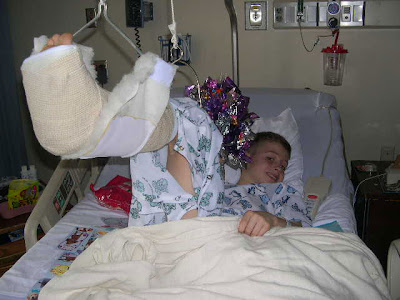 In 2004, shortly after the first of the year, my sons were playing in the hayloft on a cold, snowy day. Case came running into the house screaming, “McCain broke his leg!” Knowing the boys can be quite theatrical when it comes to injuries, I translated this as “McCain skinned his knee”. Then I caught sight of John carrying McCain toward the house. This was bad. Really bad. 911-worthy bad.

The ambulance whisked McCain away to the nearest local hospital then transferred him to the city for surgery. Broken femur. The thigh bone. The big one. Surgery. Then traction. Just like when a cartoon character breaks his leg. Only this was real life. If someone told me that for the next 24 days my son would be hospitalized, I would have told him we didn’t have time for that. He had school, we had jobs. But all that had to wait. And he needed us 24/7. I moved into his hospital room and slept in the bed next to his. Showered in his room and got to work whenever I could – usually whenever John or one of our moms could relieve me. After work I would return to his room. And when it all got quiet, I would pull out my laptop and plug it into the phone line. Horsetrailriders.com started to expand – to really come to life via a dial-up connection -- those long nights at the hospital. 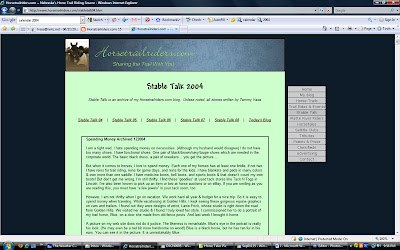 I had a feature on the home page of Horsetrailriders.com called Stable Talk. I didn’t realize at the time that it was considered a blog – I didn’t even know what a blog was back then (I was blogging before blogging was cool.) Stable Talk was just a way for me to share information about rides or trail concerns or just talk about my horses and family. Once riders stumbled across my website, I started getting emails from other riders. Some with ride information to share but most of the time, the emails were from other riders who read Stable Talk and could relate to my stories and just wanted to “talk horse.” I had already started a Horsetales Yahoo Group as a way of staying in touch with some of my riding friends from Cowgirl Weekend, so I used that forum as a way to get riders to start talking to each other. I never realized then how much Horsetales would become a part of my horse life.