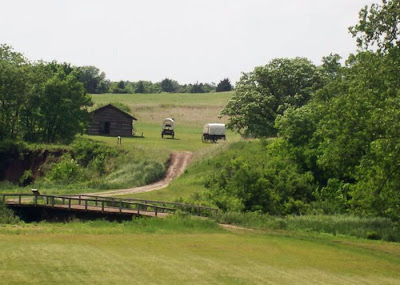 Early in the riding season, I penciled in weekend plans – whether it be day rides, camping trips or those deemed “vacation worthy”. The kid’s summer activities then start to roll in and take precedence over any riding plans, but usually it all works out one way or another. It’s been several years since we visited Rock Creek during their annual celebration. Always a favorite with the boys, it seemed to work well into our busy summer schedule.

Rock Creek Station was established in 1857 along the Oregon Trail; a resting spot for weary travelers and later a stage and pony express station. Rich in western history, most notably a gunfight between the local bully David McCanles and Wild Bill Hickok, Rock Creek Station’s reconstructed ranch comes to life during Rock Creek Days. Re-enactments, period costumes and merchants come to town for the small celebration of history.

As with every weekend trip, I begin getting things together early in the week; from shopping for groceries to packing up the trailer. Everything needed for horse and rider. The day of the trip, I hook up the trailer and move it into the driveway and begin to do an inventory of camping supplies and horse tack. I pre-cook what I can and take the food to the trailer when it is ready. I loaded the hay and water and truly thought we would be ready to go when John pulled in. Well, the demons decided to play havoc with our plans. In the last few hours before departure, the following happened:

• Refrigerator in living quarters of the trailer refused to light, thus more ice and coolers needed.
• McCain went to get ice & the hose broke in his car on the way home
• Bad cell reception where he broke down & I had trouble finding him
• John’s truck vapor locked coming home & he literally coasted into the driveway
• While quickly baling the last of the hay, the hitch broke on baler
• Stray kid at our house couldn’t find anyone to come get him
• Once departed, we had a blowout on the trailer tire 10 miles from home

But later while sitting in camp – after overcoming all of these obstacles – the sky fell from John’s world when he found out I forgot to pack the ketchup! I had obviously failed as a wife and mother. 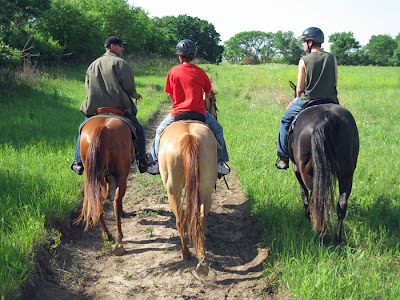 Despite the Heinz emergency, I was still able to feed my family and we hit the trails with full stomachs the following morning. It was good to have both our boys with us as well as our friends, Julie and Steve and Julie B. We meandered in and out of the trails of Rock Creek, every watchful of Julie B. on her young BIG horse, AJ. Although he had a few cute “colt moments”, he had his big boy boxers in place and maneuvered the trails well. Julie B, on the other hand, may want to invest in a face cage for her helmet. The 16+hh gelding affords her little room to duck under branches and certainly those of us on our 15hh horses aren’t clearing the spider webs for her! 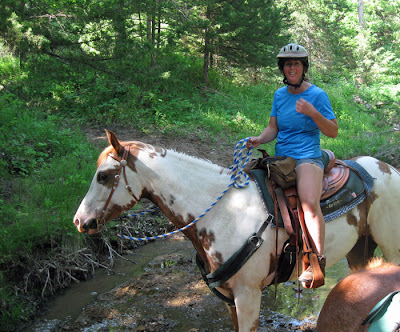 Julie B on AJ

We rode through the “ranch” as the re-enactments were taking place. There was a stagecoach with a team of mules that caught Windy’s attention and not in a good way. We worked on “moving closer, staying longer” – but quit that exercise once I knew gunshots would be going off from the “shoot-out”. But to hell with the gunshots – Windy was sure the mules were on her tail! Sorry, but I had no free hands for pictures.

Kathy and Rich joined us in the afternoon. We slid down some very slick trails – their fox trotters “dropping to their haunches” as well as any good quarter horse. We found the canyon wall creek and stirred up a very small fawn along the trail. We did some bushwhacking on what appeared to be a new trail! That Kathy sure can lead us on some wild goose chases! And there is no hill she won’t climb! (Running & ducking…) 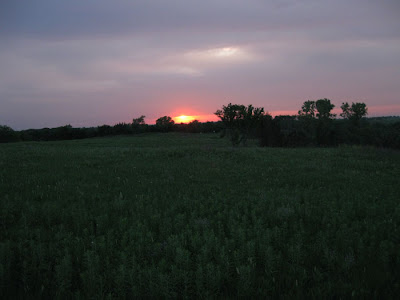 After a ketchup-less supper, we headed out for a sunset ride as the full moon was rising over Rock Glen Wildlife Management Area. We went to the top of the hill and took a long look at the area around us before heading back. It was dark when we entered the trails in the trees that took us back to camp. Lightning was visible in the west and we could hear the faint sound of thunder. We packed up camp and in a matter of moments, the rain and hail drummed against our trailer roof and no doubt muddying up already slick trails. We headed home early Sunday morning without having the opportunity to really explore nearby Rock Glen wildlife area on this trip. 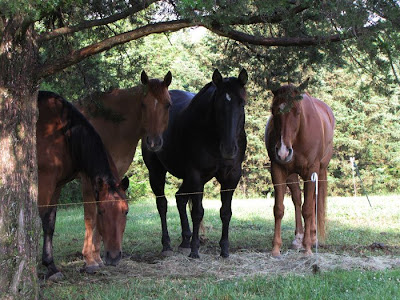 Windy, Butter, Blue & Ginger: The morning after the storm

For those of you visiting south central Nebraska, Rock Creek Station near Fairbury is a very horse friendly park with miles of trail and history galore! I hope to make it back there before the end of the season.