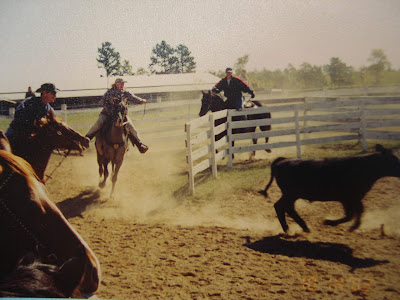 It's been my goal to update this blog at least twice a week. When I find one of my favorite blogs isn't updated, it's like going to the mailbox and not getting any mail. But I find it hard to write if there is really nothing on my mind. And even though I am never speechless, at times I'm at a loss of what to say when my fingers need to do the talking.

Occasionally I will go through my picture file to look for inspiration. I've used the good ones over and over again and sometimes wonder why I save the not so good ones. But then think back to the pictures we have from growing up, mostly taken with Mom's Brownie camera and then later she upgraded to some sort of Kodak instamatic complete with flashcubes. Most of the pictures were bad pictures by today's standard. There was no photoshopping to improve the quality or to erase the unknown person who just happened to walk into your shot. But we kept them because they were all we had. 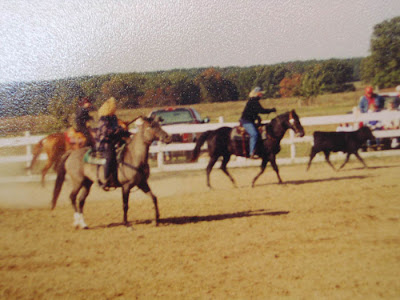 These team penning shots were taken at Golden Hills in 2002 by a friend using my 35mm. In both pictures, John is on the left on Ginger and I am on the far right on Blue. Our friend, Tammy M. is riding the grulla. It was our first attempt at team pennng and we had a ball! But only a few pictures exist and the scan quality combined with photoshopping still didn't bring them to life. Today we could set the function to "continuous" and out of 60 or 100 pictures, I'm sure we could find some great action shots to really reflect our true performance that day! I think we were only slightly better than the team with the guy who only had one leg. Or was it an arm? I know he only had 3 of the 4 .....

The following picture is an oldie but a goodie! Taken in 2003, then 6-year-old Case had a bloody nose while on the trail. I'm thinking he must have been pretty impressed that I had a "cottonball on a string" to put in his nose to stop the bleeding. Someday he'll hate me for sharing this picture. 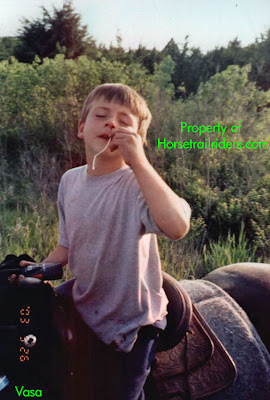 But in 2004, I joined the digital age. It was only then that I could capture what we don't normally see -- like John falling off Ginger! Okay, technically he wasn't on her when he fell... he slipped on moss growing from the stump he was mounting from and fell off the stump. But it was still incredibly funny and having pictures of it is even better than the memory! Notice, his horse didn't move except to get out of his way & looks pretty disgusted! 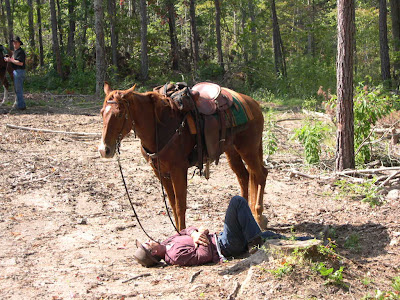 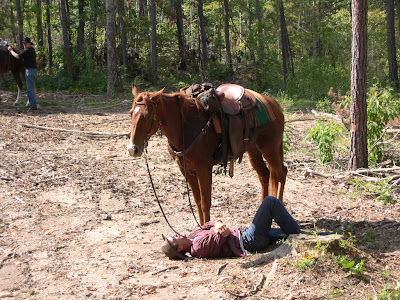 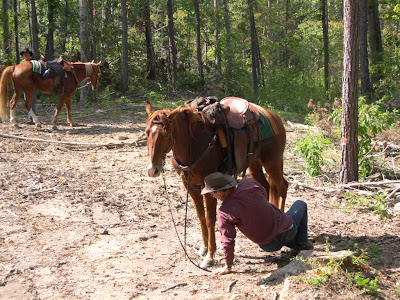 Since I've ventured into digital photography, I've gone through five cameras! Yikes, don't tell John! Actually, didn't even realize there were that many myself. The first one was a little cheapo without an LCD screen. So I still had the "unknown picture" until I plugged it into my computer. The next one, a Nikon, lasted quite a bit longer. I'd probably still be using it if it hadn't fallen from the counter into the dog water bowl. I then upgraded to a Canon SX3, which I used up until a few months ago. And since then, purchased a smaller Canon point and shoot for my saddle bag while getting to know my new Canon SX10IS.

I'm still learning to take good pictures. I've mentioned before that I see things that would be awesome in a photograph, but capturing that image from my eye to the camera is a challenge. And every now and then I get lucky. Not exactly the shot I was looking for, but fun in its own way. 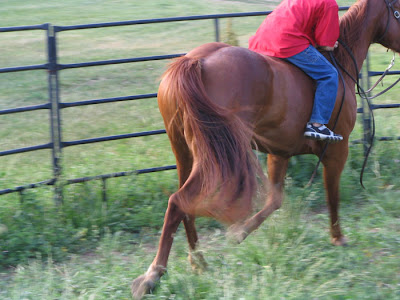