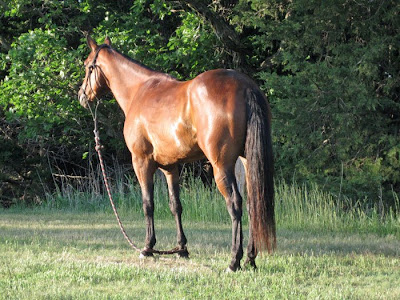 My horse is a bit of a princess. Not only is she the prettiest bay mare in the world, she is also the most sensitive, it seems. Sensitive to what, you ask? Urtica dioica. Nettles. Stinging nettles.

I’ve known this for several years, but had written it off as just one of her idiosyncrasies. Ginger, her dam, walks right through them without any problems. So do the rest of our herd. But the first time Windy encountered them several years ago, she started stomping and trying to flee the area. Subsequent times, it has turned into a Mexican hat dance of sorts. All four of her legs keep moving and she tries to chew and spin at the same time. My best defense when I know my horse is in trouble is to dismount as soon as it’s safe and that can be quite a challenge when she is in “full nettles rage”. Picture hanging on to the saddle horn, horizontal, with my legs straight out behind me, as she spins like an out of control carnival ride! Okay, a bit of an exaggeration, but you get the idea. 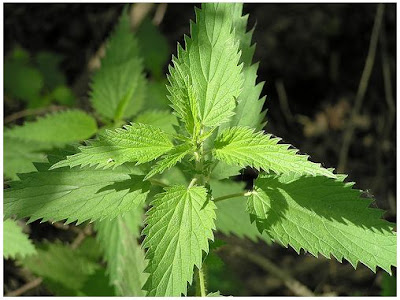 If I know I am going to be on a trail that might have nettles, I will put boots on all her legs. And ninety-nine-point-nine percent of the time, I can avoid the weeds by taking another trail or picking our way around them. Not truly understanding what she was feeling, I guess I also thought maybe the shock of touching them initially is what sends her in the rage and perhaps she just needs to get used to it – get over it already! Okay, you don’t have to hit me over the head more than once for thinking that. I get it now! It hurts her. And I think it always will!

We came down a hill this weekend and she reacted before I even saw the nettles. She lunged forward off the trail. I’d come short of calling it bolting because there was really nowhere to go in the wooded area. There were horses in front of us, a horse behind us and a very low downed tree that we both wouldn’t fit under. As I was looking for a place to bail just in case she thought we’d limbo, she turned to the right, lunging forward once again. I flopped like a rag doll, coming down toward her head just as her head came up. And we collided. I didn’t see stars but heard the vertebrae in my neck pop rapidly. At first I thought my sunglasses were broken, but realized I wasn’t wearing any. I got her stopped as quickly as it seemed to have started and quickly dismounted as she stood quivering.

I know one other horse who responds to nettles this way. Normally a very steady ride, nettles will send him in almost the same rage as Windy. I’m curious if any of the rest of you have encountered this? 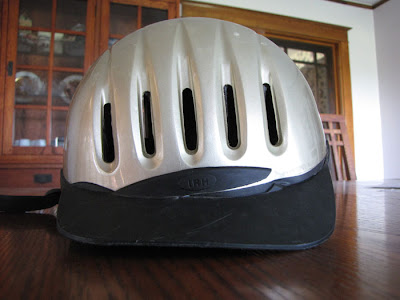 I also wanted to show you my helmet. If you read my earlier blog about helmets, you’ll see that I agree that statistics show that most of the time we will probably end our ride without a head injury. Helmets are there just in case we don’t. Well, I think I had better go buy a lottery ticket because this is the second time in less than a year that I believe a helmet has saved my noggin! No, I probably wouldn't have died, but I would have been a hurtin' cowgirl! 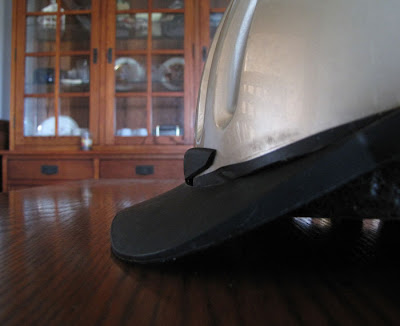 I don’t know about the rest of you, but as I get older, I’m finding it harder and harder for my brain to work right on a good day. It can’t afford very many crunches to it. My helmet – right at the visor – took the impact from Windy’s head when collided. I felt it and I heard it. The visor broke away from the helmet when her head slammed into mine. The inside foam casing has a small crack in it. I had a mild headache for about 24 hours and a stiff neck. 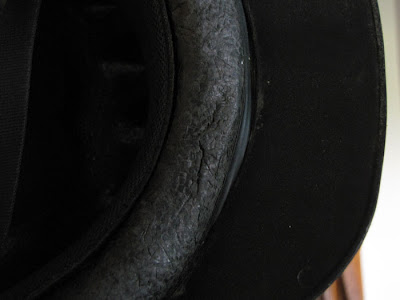 I didn’t put my helmet on thinking I was going to get bucked off. And I certainly have never entertained the idea that I would need it for a head butt. Like any other time I ride, I didn’t really think about my helmet at all when I put it on that day. It has become as much a part of my gear as my boots. It’s nice to know, however, that it was there when I needed it and I'll live another day. Perhaps you'll put yours on today, too.

Email ThisBlogThis!Share to TwitterShare to FacebookShare to Pinterest
Labels: Helmets