Of Boys and Horses 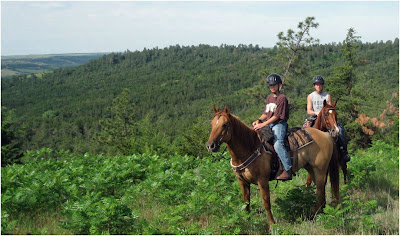 Backing into the day, Case is spending a couple days with Jess' son, Wade, so Jess and I decided to meet at Two Rivers tonight, ride for a bit and then Case would go home with her. What Jess doesn’t know is I would have paid her good money to take this child – or any or all of them! My boys have been out of school since early May and they need a separation, badly! I would offer them on eBay right now if I could! It’s become a war zone at home and they’ve designated me their referee and somehow think I will magically pick their side and break up their fights while I am at work. I swear, today one called me on my cell phone to narc on the other and while I was talking to him, the other was calling my desk phone with his side of the story! I about had a breakdown!

Anyway, since the boys had sports physicals today, I took off early to take them to the doctor (maybe get some meds prescribed to me so I can make it until school begins next month) and then McCain would go to his friend's house and Case and I would hit the trail. Case was due for his tetanus shot and the doctor said he couldn't leave until 20 minutes after administered. So while the boys finished up their physicals, I ran home to get the horses. How hard can that be? Well, here is where it fell apart! 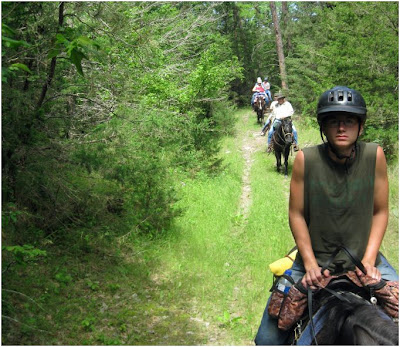 The horses are usually in the barn in the afternoon, but wouldn't you know it, I found them out in the west pasture today. As a rule, I don't take treats to the horses when I fetch them because they are easy to catch. Really, I don't give treats much at all, so they never expect them. But since I was walking out that far & getting two of them, I figured perhaps it wouldn’t hurt to have a little insurance policy so I wasn't walking the entire 25 acres after them and grabbed a small bag of treats from the trailer.

As I approached my small herd, Butter initially walked off from me, so I gave Ginger & Blue a treat. When I moved with the lead, Ginger walked away from me. Blue was still a bit sore from last night’s ride, but I really didn’t care who of the other three I took, I just needed two horses. Butter walked back up to me and I gave her a treat and slipped the halter on. Blue, Ginger and Baby came back for more and I shook the lead rope at them and they retreated. With Butter's lead tucked gently under my armpit, I turned and began to halter Windy, who was on my other side. 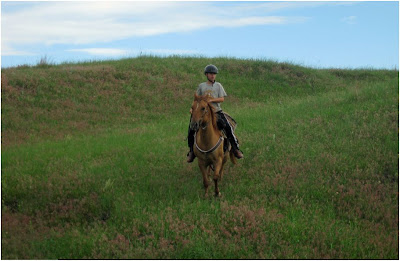 All I can say is my herd must be frickin stealth! I didn't hear them approaching until I heard Butter take a kick from one of the herd. She jumped to get out of the way, right as I turned to see what happened and she came down right on my foot! Can you see stars when your foot gets pounded? I think I did. And THAT is what I get for breaking the treat rule.

So I hobble back to the house supporting myself using Windy's neck as a crutch and leading Butter. No, I don't think anything is broken, but it hurt (still does) like a sonofabuck. I load them up in the trailer and notice then my back tire is low on the trailer. So I have to move the trailer toward the garage where the compressor is, hobble around to hook up the hoses and pump it up. By now the kids called & said they left the doctor’s office & are running wild in town! Cruise control is your friend when your right foot is smashed. 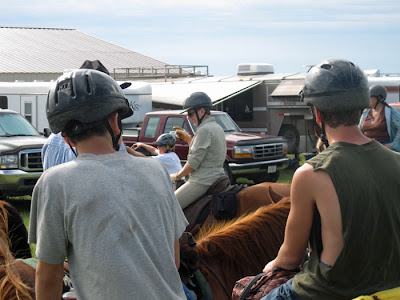 Case & I met Jess on time, believe it or not. Vic also joined us for a ride. Case knew I was hurting and even saddled his own horse. (I knew he could). What a beautiful night; a wonderful breeze & I swear, I had goose bumps. I couldn't trot with a throbbing foot, but Case & I loped for a bit. But by now my energy was drained and we cut the ride shorter than normal. Of course I couldn't get out of there unscathed. Case got impatient while I was still unsaddling and started to load Butter. I had bent down to take Windy's boots off and Butter bumped into her from the other side. Windy then stepped over and bumped into my head and I swear, shortened my neck about 2"! Truly, I was driving home thinking I've been beat to almost death today by horses and can't wait to do it again tomorrow! That is so sick and wrong!
- July 16, 2009