The Dog (and chicken) Days of Summer 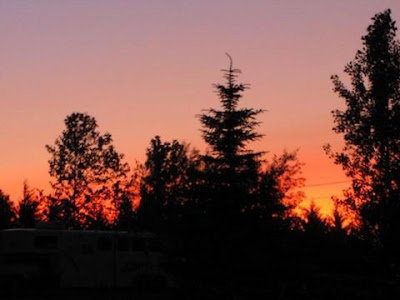 The Dog Days of Summer. Hot, sultry. Stagnant. And it seems to be the time the horses have amassed every fly in the county on every body part. I remember the first time one of the farmers saw our horse in a fly mask: “John,” he said, “Those horses can’t see!” John assured him they could. Up until this year, I haven’t bought fly sheets, but poor Blue is getting bit so bad that I think if any of them warranted one right now, he would. I can about imagine what the neighbors will think when they see the horse in the complete ensemble – sheet and mask! I’ll get back to you on that…. 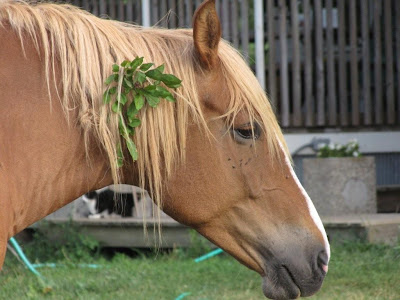 McCain thought he wanted to be a chicken farmer this spring and bought some chicks. Thinking back, it was kind of a weird project for an almost 10th grader who spends little time at home as it is. His interest in the poultry lasted about 1.2 weeks. We now have “free range chickens.” Surprisingly, I’m kind of enjoying having them roam the yard. They are very colorful and quite animated! You should see them run! They are so funny! John caught me saying "my chickens" last night. So I guess they are. But I think the horses think they are their chickens. And they seem to have attached themselves to each other – I’m sure lured by the swarm of flies at the horse’s legs. 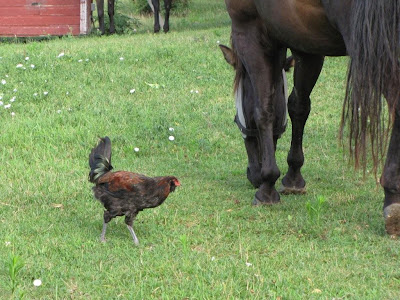 One day I was quite amused to find the black chicken by my black horse, Blue. 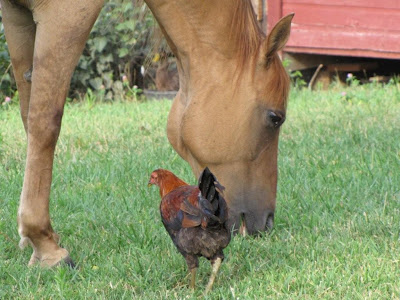 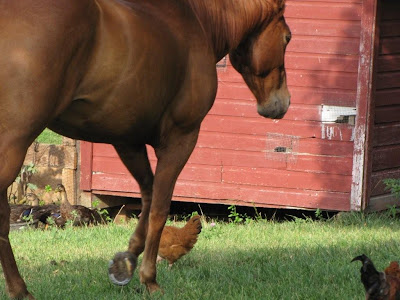 And a sorrel colored chicken by Ginger, who is a sorrel herself! Yep, it doesn’t take much to amuse me.

Last year, August was unusually pleasant and I racked up more riding hours than in any other month. I’ve given up before I even started this month. We just finished the weekend of temperatures nearing 100. Instead of riding, I’m just taking care of business. Got the dog neutered. Had the farrier out. Car shopping, school shopping. Haircuts. Trying to figure out how to get rid of a bumblebee nest. (You should see Case & Ritz run when the bees are in hot pursuit!) 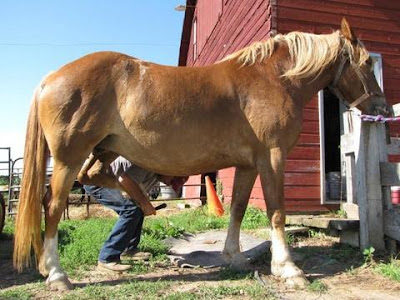 In case you were wondering, according to Wikipedia, the phrase "the dog days of summer" refers to the hottest, most sultry days of summer. In the northern hemisphere they usually fall between early July and early September. Dog Days can also define a time period or event that is very hot or stagnant, or marked by dull lack of progress. 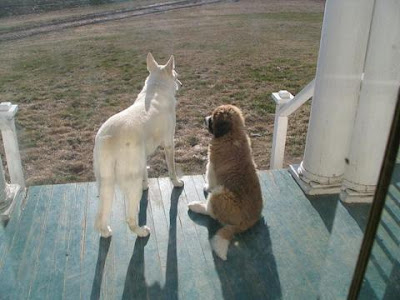 The term "Dog Days" was used by the Greeks after Sirius (the "Dog Star"), the brightest star in the heavens, rose just before or at the same time as sunrise, which is no longer true, owing to precession of the equinoxes. The Romans sacrificed a brown dog at the beginning of the Dog Days to appease the rage of Sirius, believing that the star was the cause of the hot, sultry weather. Dog Days were popularly believed to be an evil time "when the seas boiled, wine turned sour, dogs grew mad, and all creatures became languid, causing to man burning fevers, hysterics, and frenzies" according to Brady’s Clavis Calendarium, 1813.

There. So now we know. I can kind of relate to “growing mad” and having “hysterics and frenzies!” Thank goodness school starts next week! 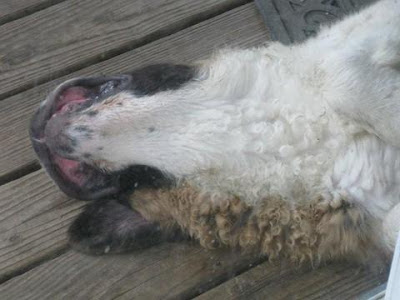