The Best of Rides 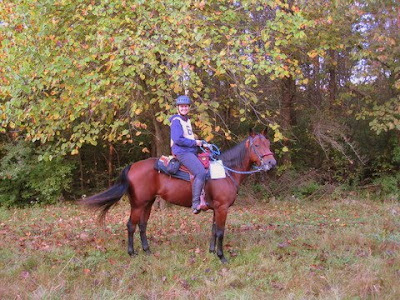 Stephen’s Forest was beautiful. The temperature was mild and the leaves were just starting to change color. I’d wanted to ride there for a long time and finally got my chance. The horses were unloaded and settled in at their hitching posts and we checked in for the Competitive Trail Ride about mid-afternoon. It looked like there would be about sixteen competitors in my class riding the 36 miles over the next two days.

I brought Windy over to show for the judges. “They said” both the equine and horsemanship judges were tough. "They" were right. I quickly lost three horsemanship points at check-in for things veteran riders probably do correctly in their sleep. But Windy was sound, had good metabolics and was ready to go. Unfortunately, later that evening, I discovered that I had forgotten to pack her saddle pad. The pad that kept her back safe and sound at the last CTR was in my two horse trailer at home. I’d have to make do with the extra one in my trailer and I didn’t feel good about it. 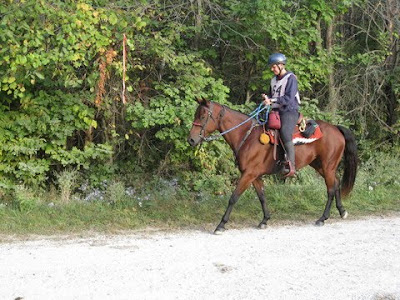 We rode out around 8:00 the following morning with a small group. Windy was pretty full of herself and we definitely weren’t going to mosey down the trail. A few times I wondered when – and IF – she would come down. And then we happened upon the first obstacle as we were climbing a hill. When it was our turn, we were asked to turn and face a blue ribbon tied to a tree and back between two rocks buried into the surface going off the trail. I took a deep breath as I moved her to the blue ribbon. I looked over each shoulder to clearly see where I had to move her and gently moved my foot back so that her hindquarters would line up. I told her “back, back, back” and gave the leg cue she recognized.  She collected herself and started to back in the direction I gave her.  I heard the judge say “one more step” and Windy took that last step. And the judge said “excellent!” The tone was set for the day! It was going to be an awesome ride. 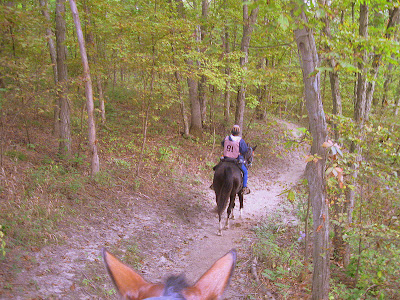 We rode that first day for almost 7 hours. Our P & R checks were great. The rest of the obstacles and observations were hit and miss, but I felt like I had a good ride. When I untacked her at the end of the ride, I was sickened to find obvious edema from near the O rings. The pad I had to use in a pinch did not do the trick. That, combined with soreness of the loins, I started losing points quickly.

I truly needed a 34” saddle pad. Competitors were willing to help, but most were only 32”. I had another saddle in my trailer… perhaps if I used that; the O rings would not irritate the same area. I decided to take the gamble on it working….

On Sunday, we found ourselves being chased down the trail by a horse fly! Can those things boogie! The GPS said we were galloping about 19 mph and it was staying with us. At the first opportunity, I stopped Windy, jumped off and went to war with the bug. I won. Too bad I wasn’t scored on that maneuver! Later, another request was to trot at any speed down the trail and jump or stride a log which we will come to. I started out at a nice pace, rounded the corner and “the log” certainly seemed “tree sized” to me! I was in a good position and told Windy, “Jump!” She did. We nailed it! What a hoot! 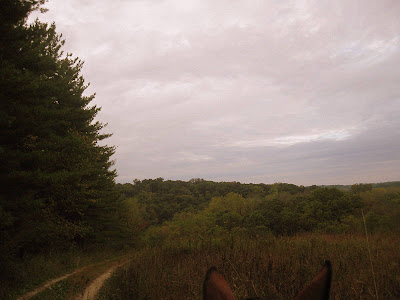 It was the best of rides as Windy and I were in sync more so than at the previous CTR, albeit not good enough to be in the money (Windy was 7th & I was 8th in a class of 14).  It was the worst of rides as our saddle fit issues took away from the things that we were doing together so well.  Even though the different saddle didn't perpetuate the prior soreness, moving it off the sore area caused a girth sore so we lost a few more points at check-out.  I can't help but wonder how my regular tack would have changed the outcome.  I want a “do-over.”

Nonetheless, it was a great last ride. The last CTR for this year anyway. Next year? Who knows? Remember, I never say never….