A "Grand Finale" To A Friend 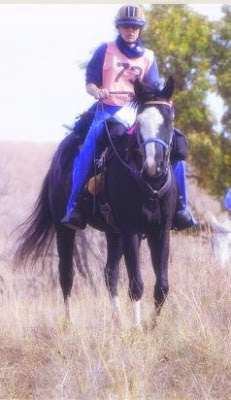 On Saturday afternoon, I got a phone call from my friend and trainer, Brenda Messick. Some of you may read her blog, Horses Are Our Life. She had just completed Day 1 of the Indian Cave Competitive Trail Ride when her horse, Finny, appeared to be colicking. She called from the road and was rushing him to her vet. My heart skipped a beat and I said a silent prayer for both of them….

I’m knocking wood as I write this, as we haven’t experienced colic in our herd, but often thought about it like one does about a number of undesirable sicknesses and diseases – knowing it exists but hoping it doesn’t come knocking on our door. I know it’s not necessarily a death sentence and depending on the severity, could be treated with something as mild as hand walking and Banamine or being “oiled” by the vet. But the nightmares we hear about colic involves surgery being the only option to save the horse. I cringe at the thought.

I could argue that horses are a necessity to maintaining my mental health, but the reality is I can pull my emotions in check when faced with what could be a very large veterinary expense. Over a decade ago, I recall thinking the platinum MasterCard was going to save the life of my beloved dog, Macy, only to have to have her put down two days later. Paying that monthly installment for “the try” was a bitter reminder of thinking with my heart and not my head and of what we loved and lost. It taught me not everything we love can be saved, the vets aren’t God and that sometimes we just have to say goodbye. I was at peace with that school of thought when my young gelding, Gunner, was mortally injured in a pasture accident years later. I won’t say it didn’t suck, because it did. 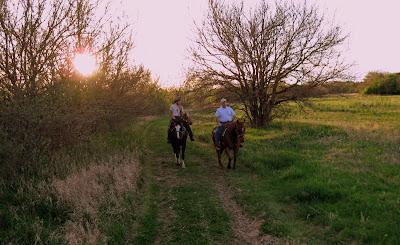 Finny was Brenda’s baby – almost literally -- as his dam died of colic when he was a foal. Brenda raised the young colt to become the fine 8-year-old gelding. The black horse, standing 15.3 hh, was quite striking with his tall white socks and his off-center wide blaze. Finny was not only recognized for regularly placing the last couple years in many of NATRC’s Region 6 Competitive Trail Rides, but he also served as a lesson horse and was a favorite among Brenda’s students.

I’ve known Finny since I’ve known Brenda. While taking lessons, she would be mounted on Finny, demonstrating what Windy and I should be doing while we never mastered it as eloquently as Finny could. Windy was comfortable with Finny and he was one of the few horses she wouldn’t pin her ears at. I think she must have had a crush on him. 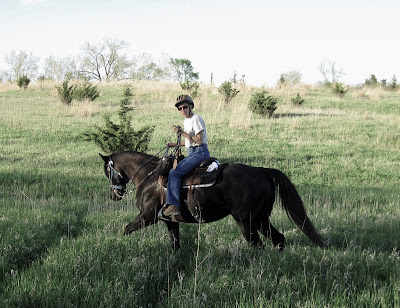 Brenda and I both like to ride fast. The clouds in the distance didn’t seem a threat on what looked like a beautiful summer day last year when we were trotting and loping down the Oak Creek Trail. But the further out we got, the closer the clouds came toward us and before long, we were dodging lightning bolts in the pouring rain! On Finny and Windy, we ran for cover and waited out the storm. And as soon as the storm lifted, we raced our horses back to the trailers, freezing in our wet clothes. 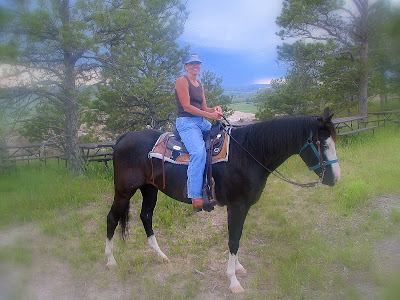 More recently, we met prior to a Platte River Riders ride to put in some long trotting before the rest of the group arrived. With Windy leading, we began crossing the narrow, arched bridge. About half way across, the bridge started to wobble. Windy stopped, obviously concerned. It was too narrow for her to turn around, and no matter how I prodded her, no way, no how was she going to go forward! So she started to back up. Finny was right behind us and being the good sport he was, rather than fight to move forward, he went into reverse, too. And both horses gracefully backed all the way off that bridge! 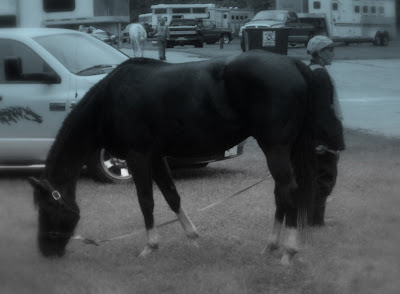 We teamed up with Brenda and Finny at the Stephen’s Forest CTR a few weeks ago. I remember how excited we were after the “trot and jump” obstacle that we both nailed! And a funny moment started out not so funny when Windy was stung by a horse fly and started to buck as the relentless bug came back for more. I told Brenda we needed to get out of here fast. “Run!” Brenda, confused by the urgency caused by a horse fly, moved off the trail so Windy and I could quickly pass. As I am galloping down the trail, I glance behind me and see Brenda and Finny now at a dead run behind us! After our sudden departure, it seemed the fly had set it sights on poor Finny!

Windy and Finny’s pace was well matched. Finny was usually in the lead with his bold extended trot and I would try to keep Windy at least a horse length behind him. But what I remember most, was the times our horses were side by side, matching hoof falls, running through the forest. 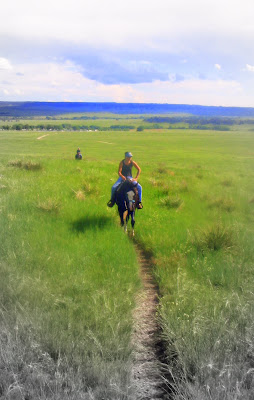 Brenda’s Finny was diagnosed with a twisted gut and the vet concurred that she was losing him. She made the heartbreaking decision to take his pain away and let him go. I still find myself tearing up as I type this. I’m so glad I had that last ride with Finny and such good memories from that fall weekend.

My heart breaks for Brenda and the loss of her partner, Blues Grand Finale. Only the good die young, it seems. God speed, Finny. I’ll miss running next to you. 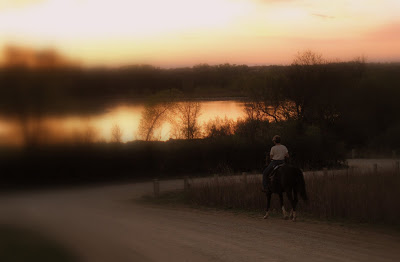