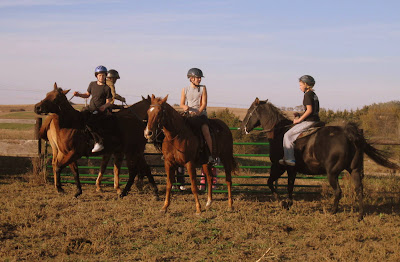 On Sunday, we had a family reunion of sorts. Thirty-odd relatives (odd?) for a little Vasa family bliss. My side of the family is quite small. My parents are both gone. I have an older sister, her husband and their two kids and younger brother and his daughter. So a reunion on my side would be equal 10 people counting us. Total. The thirty “odd” that we had on John’s side wasn’t even half of his siblings. You can about imagine holidays at the Vasas.

We finally got a break in the weather after a long, damp and cold week. After carving pumpkins, jumping on the trampoline, and messing up my hay in the hayloft, Case and a few of the pre-teen (or just barely teen) cousins meandered down to the pasture with halters in tow and wrangled themselves some horses. It was just the excuse I needed to get out of the kitchen. 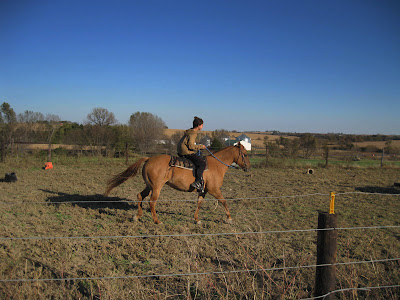 Frank on Butter. Yes, helmets for everyone. Someone was still fetching them from the trailer. 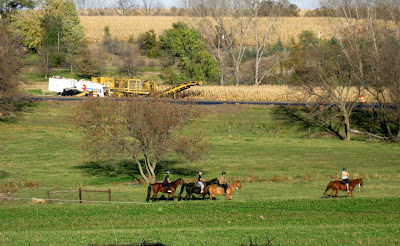 Case's trail ride down to the pasture. Case is in the lead, followed by Frank on Butter, Lauren on Blue & Morgan on Windy. There is road construction going on behind them.

Hmm. Case was on Ginger. She is the boss mare and if she is kept on a tight rein, so to speak, the other horses will be fine. Can I keep Case on a tight enough rein? Can I trust him to just walk and not be tempted to show off to his cousins how Ginger can run 40 mph? I threatened him with everything dear as I opened the gate to the arena. But I also knew he could handle it. 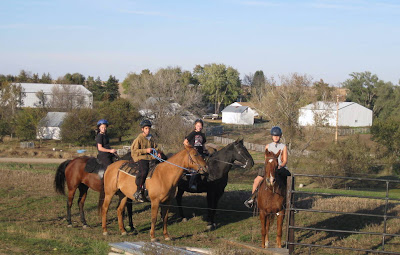 As the nieces and nephews get older, I am less nervous with them riding. I trust my small herd of trail horses and most likely none of the young riders will get themselves into too much trouble. I remember the glory I felt when I was a child and given the opportunity to ride a horse – any horse. And the older Case gets, the more confident I am of his riding abilities and herd control when riding in a group. This is the first time I let him lead a group of young kids down into the pasture without John or me and he made me proud. 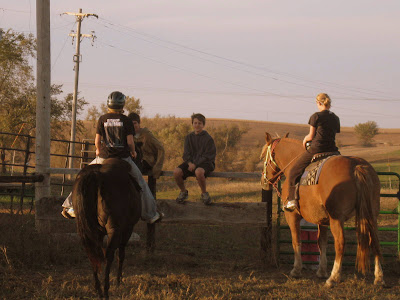 By now, some of the younger girls had gathered and were most eager for their turn. They watched anxiously as the others rode down in the pasture. I decided we needed one more horse so everyone could get a turn & engaged these girls into helping me saddle Baby. I had her ready by the time Case’s gang rode back up. The boys were done riding and swapped out their horses to the younger girls. One of the older girls took Baby and handed Windy over to her sister. Another, who was not yet confident at riding solo, rode double with her cousin on Blue. 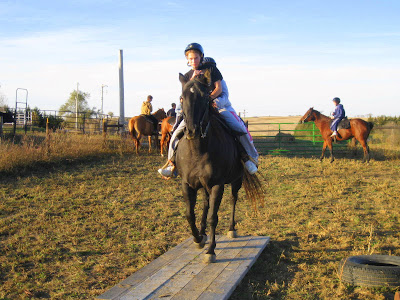 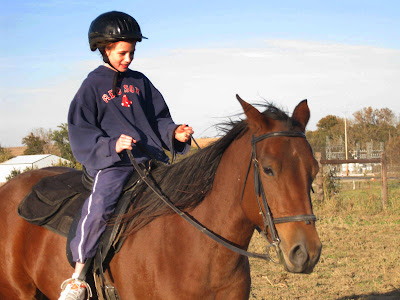 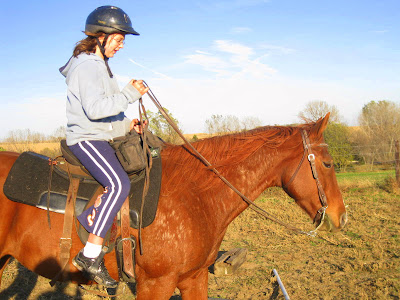 It was fun to watch what my horses could do (and didn’t do) for these girls. Ginger, normally the spitfire, dropped down to low gear for her timid rider. Blue was loping the rail like he did it every day for one of my older nieces. And Baby looked so happy just to be getting some attention. (Somebody really should put some time on that mare!) I was surprised at how well she handled for her small rider.

The girls were anxious to help me untack and put away the saddles. One of the girls had Blue’s cinch unhooked while his rider was still on and another forgot Butter’s rear cinch. But the horses stood quietly while their amateur handlers moved quickly around them. And a quick inspection of the tack room had everything put back where it belonged. It was truly a highlight of their day. And mine, too.