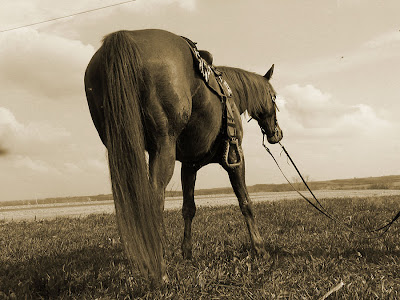 The first bad wreck I had was a few years into our horse endeavor. We went on our first organized trail ride and we were such amateurs! John was on a three-year-old and I was on an OTT thoroughbred, Nick. There were a lot of horses – close to 200, if I recall. Nick got very nervous when a buckboard wagon passed us with the chains rattling. I kept him still as best I could until they were out of sight. Then someone (other than me) had an accident. Ribs, shoulder … who knows what, but they couldn’t get back on their horse. So the safety riders radioed for the buckboard wagon to come fetch them. (Big sigh).

Nick heard the chains on the buckboard before he saw it. He started to prance, to spin, and to resist. I pushed him to move forward. Ah, location, location, location…. I was on the side of a hill when I popped him with the reins. He reared up & went over on me, landing on my hip and right leg. And to add insult to injury, he ran off! Although I was stiff and sore for weeks, nothing was broken but my pride. Nick got a new zip code shortly thereafter. 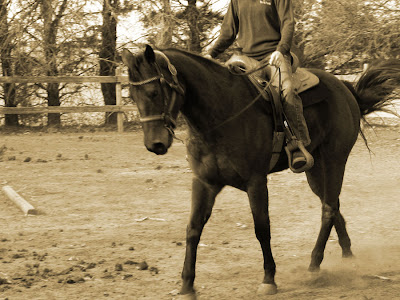 In 2005, I got my first horse related broken bone while I was on the ground. We had ridden that morning & tied the horses to the trailer while we ate lunch. Before the next ride, I approached Blue with fly spray. The same fly spray I had used that morning. The same fly spray we use season after season. But Blue gets funny about things sometime and he took exception to it then. You’d have thought the devil had his tail as he jumped away from the trailer. He hit the end of his rope and all 1,340 pounds of him was coming back down fast. In my scramble to get out of his way, I fell on Ginger, who was tied next to him. She jumped away from me, hit the end of her rope and came back down on my ankle. It was broken. And it was May – the beginning of ride season.

I’ve had other spills at other times. None really memorable until someone reminds me of it. The worst spill I took happened last fall when I took a head dive off the Black Colt. I took a break from riding him afterwards, but eventually got back on him and had some good rides before he went to his new home.

Although the fear has been there and always will to some extent, my desire to ride is and has been stronger than the fear.
- November 05, 2009