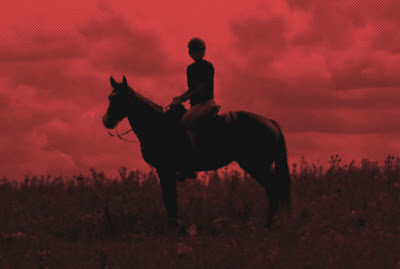 Some people read books and others watch television. One of my favorite pastimes is perusing blogs of other horse people. Although I have bookmarked a few in the margin of my own blog, it nowhere near represents all of those I read. While I am in awe of the competitive goals and accomplishments of some of my favorite bloggers – Jonni from Trot on Hank and Tamara of The Barb Wire come to mind - I also enjoy taking "virtual" rides at Mt. Hood with All Horse Stuff’s, Kacy and Wa, and seeing Alaska through the Alaska Pony Girl's Riding Log.

Every so often I’ll read about a rider who has experienced fear of the horse in some respect. Most generally, they are around my age, give or take a decade. A new rider or possibly a re-rider, who has always wanted a horse, dreamed of the horse, and once the horse is in their barn, that person is now afraid to ride. The fear could be a result of an accident, undesired behavior from the horse or just something that rider thinks the horse could do which terrifies her. The rider is usually in turmoil; never sure whether it is the horse or them. They ponder additional training or perhaps a new horse. Some have even given up their dreams of riding at all and are satisfied with just having a horse in their life.

Reasonable or not, the fear is real to that person. Years ago it nearly ruined my dreams of riding. And I did about all of those things I just mentioned. So I feel a kinship of sorts with those bloggers. 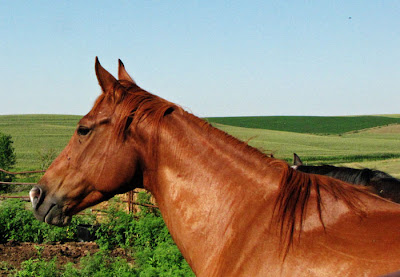 We got our first horses shortly after my 39th birthday. Having had horses as a child, just how hard can this be, I thought? We bought, Ginger, the first horse we looked at. "Three-year-old-and-kid-broke", we were told. And it took about a week for this filly to scare the hell out of me! What did she do that was so terrible, you ask? Nothing really. The fear was brought on as a result of a story I read in a magazine. In the article, a lady was enjoying a leisurely ride when her horse bolted. When it couldn't be stopped, she bailed. And she lay broken and busted in the field where she fell. And it was like a switch was flipped in my brain. “That could be me!” The next time I got on Ginger, I got as far as the end of the driveway and quickly dismounted. I was sure she was going to bolt. I was going to be laying there broken and busted, too.

John was confused with what was now my low courage. I told him it wasn’t me. I have been riding since I was a kid (minus a 35-year absence from the activity, but who's counting?) It was Ginger’s fault. "She is going to bolt! Get me another horse! I’ll ride it!" So we bought another horse – a 16hh saddlebred mare - and it took all of 3.5 minutes for me to determine that I'd went from the frying pan into the fire as most likely she, too, was going to bolt! And I wouldn't be broken and busted this time. I.Was.Going.To.Die! Truly, at this point, the only horse I could ride was the kids’ 20-something-year-old mare. And as bad as this sounds, I was comforted in the fact that I was pretty sure I would kill her before she could kill me! 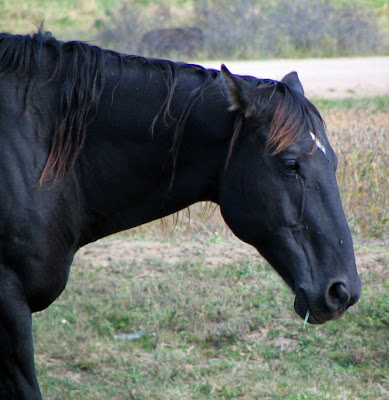 About six months after we bought Ginger, we found Blue. He was then a four-year-old gelding. He’d been professionally trained and had most recently ponied colts at the track. Today I would think that he may have been pushed too young and that four was really young, but at that time, his resume sounded pretty promising. His owner told me, “If you have a problem with him, it’s you, NOT him.” Well, I took that as a bit of a challenge, even though truer words were probably never spoken.

Blue wasn’t necessarily an easy horse. In retrospect, I think it was because he knew more than I did. I had never had a single riding lesson in my life and he couldn’t understand what I was asking from him. But he always tried. He was patient. He was gentle. Other than an occasional spook (which he probably got from mirroring me), he could do no wrong in my eyes. Blue wasn’t the silver bullet or the magic pill that made my fears go away. But it no longer had a stranglehold on me. I didn’t necessarily let go of my fears, but started getting more confident in my abilities. It didn’t happen overnight. It just plain took time. 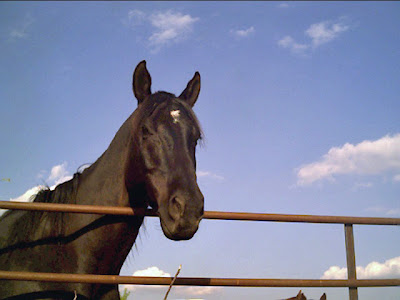 Because I only trusted Blue, it seemed logical that my boys ride him. So throughout the next few years, both McCain and Case claimed Blue as their own. And we added another steady eddy to the herd, Mikey. Although not without reservation, I started riding other horses. Some good, some not so good. And my fears were compartmentalized. “Reasonable Fear” would rear its head when I was on a young or an unknown horse. “Unreasonable Fear” would crop up every now and then when I THOUGHT I might find myself in a situation where I could die or at the least face severe bodily injury. Many times it was a figment of my imagination, but none-the-less, those I were riding with would have to humor me with whatever I felt was a suitable resolution at the time. Can’t say it doesn’t still happen, it does, but with a lot less frequently. 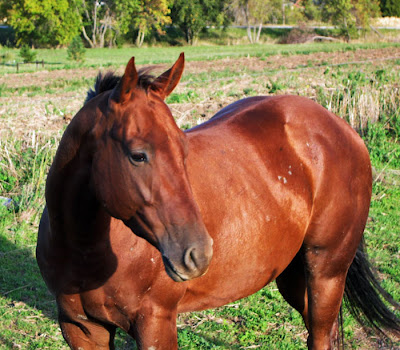 About six years ago, I was invited to my first Cowgirl Weekend. It would be the first time I would pull the trailer by myself. The first time I would horse camp without John. I would be responsible for getting my horse there, for its care and I would be riding without my family. I would be totally in charge of my own life and that of my horse and I was up to the challenge. Although I had been riding Bo, a 3-year-old colt, that summer, John suggested I take Blue for this adventure. He didn’t have to ask me twice. I loaded up my True Blue and headed off to what would be my first “Independence Day”. And that it was. 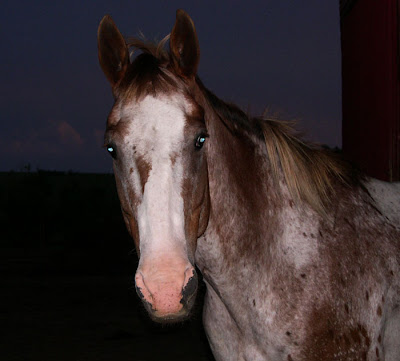 The next year, I slayed the first dragon that haunted me. Ginger. When Jo, the gelding I had most recently bought, had an injury, Ginger was the only horse we had in good enough condition for not only my second Cowgirl Weekend, but my first Competitive Trail Ride. My heart was no longer in my throat. She didn’t buck. She didn’t bolt. She took my breath away as I opened her up and we ran across the fields. 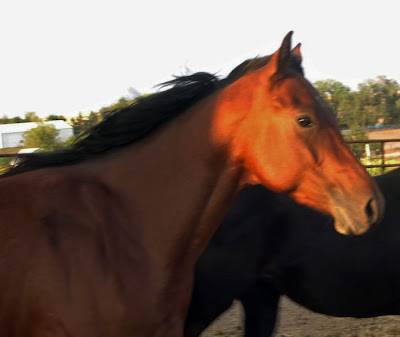 Today, most of my Unreasonable Fear is gone. I contribute it to those horses I trusted the most like Blue and Mikey. Bo and Gunner both showed me that young and green didn't necessarily equate to danger. And to the friends who have encouraged me along the way. Their patience, while I worked through my problems, was priceless. Riding lessons have helped me learn to ride better. My weight loss has helped my balance and my partnership with Windy has made me proud. Sure, I still get fearful sometimes and my heart starts to beat uncontrollably. And yes, sometimes for no good reason that I can come up with. But mostly, it’s “good fear” that remains. The kind of fear that keeps us safe. 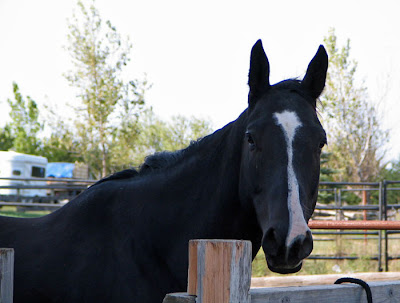 The best advice I could offer anyone is to take lessons. If you are afraid of your own horse, start with a lesson horse. That may lessen the anxiety you have about your own horse. Or validate your concerns. A good trainer will not only help you with your horse, they can get into your head and beyond. But no matter what you are riding. Ride. I didn’t let fear keep me from throwing my leg over the saddle. No matter how scared I was, I wanted to ride more. I looked for safe environments so I could continue to do just that.

The other thing that helped me was a circle of horse friends. Other women. Some new to horses like me, others who were veteran horsewomen. We started our Yahoo chat group, Horsetales, which is still so important to me today. These women made me accountable for my own success by contributing to a forum for sharing challenges and adventures. By inviting me to share the trail with them. I couldn’t put riding on the shelf for another time. I wasn’t getting any younger. If I were going to live my dream, I had to do it now. 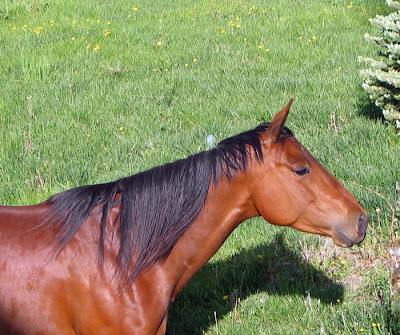 If you have followed this blog, you’ll know my story continues with Windy, My Dream Horse – who, coincidently, is Ginger’s only baby. I wouldn’t say I’ve finally arrived, heck I may never get there, but I’m having one extraordinary ride.

Feel free to share your story in the comments and the link to your blog, if you have one. I look forward to hearing your story. 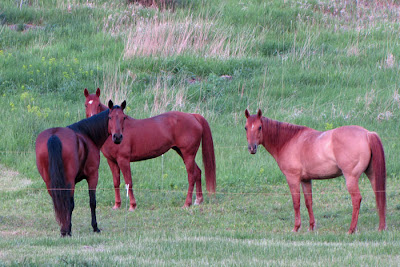