You may find it hard to believe, but sometimes I just run out of things to talk about. When Michelle Julian of the Nebraska Humane Society asked if I would be interested in sharing her story about two horses that were cruelty cases and subsequently confiscated by the NHS, I was honored that she thought of Horsetrailriders.com as a place to share her story and enjoy the chance to host a guest's blog.

The story isn't about how the these horses got into the care of the NHS to begin with, but where they have since gone. Thank you, Michelle, for sharing your story with us. ~Tammy 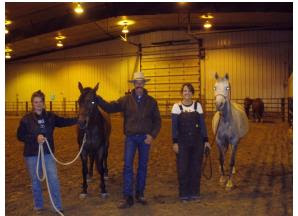 Since January of 2009, the Nebraska Humane Society (NHS) has had over 20 neglected or unwanted horses arrive for care. This year seems very atypical, as we have been called to assist in several horse cruelty cases outside our normal jurisdiction. Whether it is the economy, loss of interest, lack of time, more horse neglect cases have surfaced over the past 3 years that NHS has ever experienced.

Luckily, several have been adopted this year, along with a mare that had been with us for over two years, finally finding a safe home. But alas, a few still lag behind, be it age, breed or education, some just don’t seem to generate much interest.

A few of us a NHS have horses of our own and meet regularly to discuss what we can do to help these horses get adopted. Some of us donate time to work with the animals to attempt to get them more “adoptable”, trying to figure out what makes them tick, what we can do to work them through their troubles and try to figure out what type of owner would be best suited for the particular horse.

Challenging….very challenging is our job, as most people today want a horse they can jump on and ride off into the sunset without understanding what kind of willing partnership that entails!
Being the primary handlers of these “unwanted” horses, we need to find a way to educate the horse in the best way to be able to adapt to their new owners.

About 3 years ago, I was able to ride in my first Peter Campbell clinic in Fremont, Nebraska. It was life changing…..the changes Peter develops in a horse and rider cannot be explained with words, they can only be experienced and understood through riding in it yourself.

In September I contacted Peter’s office and asked if he would be willing to work one of our “adoptees” as a demonstration in the upcoming clinic. Later that day Trina (Peter’s wife) contacted me with an amazing proposition. Peter would donate two clinic spots for myself and a coworker to bring the most troubled “adoptees” to the Foundation Horsemanship portion. I was speechless and amazed at the opportunity Imeera and Halima would have as candidates for the clinic.

The first day proved to be exciting and educational. My filly, Halima was a handful. She was a horse that would not let the farrier near her feet, had little confidence, wouldn’t stand to be tied, always wanting to flee, a highly sensitive horse!

On the second day of the clinic, Peter worked my little filly, I handed him the lead rope and he worked her on horseback from his gelding Reata. It was like a choreographed dance, Peter on his horse doing a canter pirouette while Halima trotted and cantered around them, disengaging her hindquarters and facing him with just a feel and with a slight suggestion she softly changed directions. 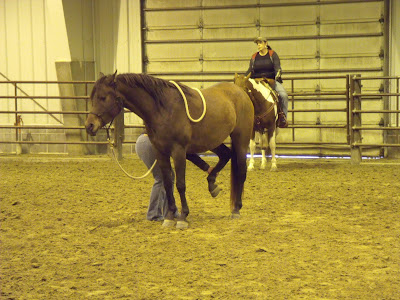 Over those 4 mornings both Halima and Imeera changed inside. They truly began to trust the human; you could pick up all four feet, flag them anywhere on their bodies, and they generally enjoyed the human. These young “adoptees” learned to walk and trot around us calmly and with such a light feel to disengage the hindquarters and back with the softest suggestion on the halter. We could jump up and down on their sides as if we were mounting bareback and use the lead rope like a cinch on the girth area. There was so much that was accomplished, but most importantly, it was the inside of the horses that changed. Their mental and emotional states were so soft and willing.

Peter is not a clinician that coddles you and does it for you, nor is he degrading to make you feel as though you’ll never get it. He treats you like the horse…he gets you to try and if you want it bad enough, you’ll work at it. Once Peter sees that try in you appear, he will help you with amazing passion to get you to help your horse on your own. When I thought I was being soft, he would say “softer”, when I figured I wasn’t being firm enough, he would say, “ too firm, ease off”. I changed my approach, and he was right, the horse would change. Sometimes my filly would get worried and I didn’t think I could do what it would take to help her. Peter directed us enough to get a change, encouraged us enough to figure it out for ourselves without doing it for us. It was just as changing for us as it was the horse. Peter had me “get in the trenches” with her and we both came out the other side better. 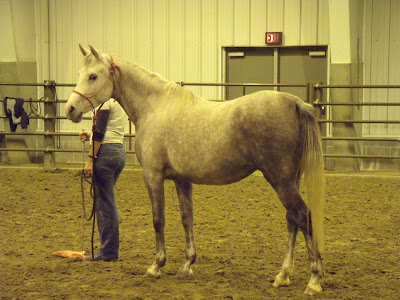 To have an opportunity to be guided by a true horseman is something we will never forget, what happened over those 4 days changed everything for the horses and us. I think about the clinic and Halima often, realizing that it isn’t about our horses changing; it’s about us changing.

Article submitted by Michelle Julian of the Nebraska Humane Society