Yesterday, I worked with the Nebraska Horse Trails Committee at our annual fun day. The purpose of this event is to raise funds for horse trails in our state. Held at 3V Stables in Ashland, over 60 people came to participate in the mounted games which this year were geared toward trail challenges. Rather than post a news-type blog about the event, my friend, Annette Griffin (pictured above), gave me persmission to share her recap of the day which she shared with us on our list-serv, Horsetales. It will give you just a taste of how fun the day truly was.

Gorillas should NOT wear BELTS!
By Annette Griffin
After a trip back home to change trailers, Bella and I headed out once again to 3V. We got there during the middle of the first event so we had to scratch from that one. I got her out of the trailer, knocked the dirt, mud and road grime off of her and saddled up. I couldn’t believe how many horses and riders were there and it was a little overwhelming for both of us at first. This was my first ever game day to ride in. I even had to ask HOW to do poles! I’ve watched other people run them before but I never paid attention as to what the proper pattern was. But I digress……..

Our second game was a partner one where we were required to rescue a patient, transport them to our partner who was waiting with a stretcher to take the patient to the hospital….. OK.. Sounds like a real-life situation that could happen on the trail and a good test of rider and horse. WELL….. As I mentioned before, there were a lot of horses and riders and being the last to arrive, I was pretty much one of the last to have a go at rescue. Mary Hanson agreed to be my partner and after some strategizing we decided that Bella and I would pick up the patient and she and Sunny would deliver the stretcher. 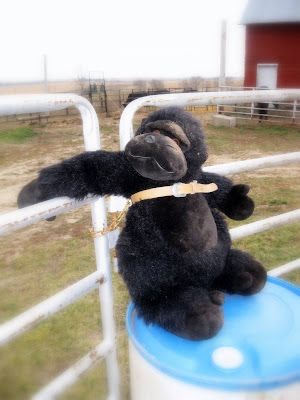 Plan in place, I felt good UNTIL I found out that this wasn’t a typical trail experience, it was designed for those trail riders who spend countless hours in the RAINFORESTS OF AFRICA! Our “patient” was big black gorilla with arms the length of my horse trailer and he was wearing a BELT! Why do gorillas wear belts? I’ve never noticed them wearing belts in the zoo or when I’ve seen television programs on Animal Planet, but THIS gorilla was wearing a belt. Bella was going along with the whole idea of being an equine paramedic right up to that point when she spied our patient sitting there on top of a barrel (another strange rainforest sight, I’m sure) waiting for us. 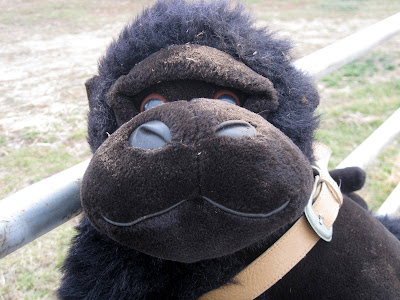 Her eyes got bigger, her head shot up and I think I heard her whisper the rosary! (I personally never knew until that moment that she was Catholic, which could really explain a lot of things about her that have been a mystery up to this point, but that’s another story for another time) But in her best Mother Theresa form, after a few snorts and more prayers from both of us she agreed to enter the city of gorillaville to fetch our patient. 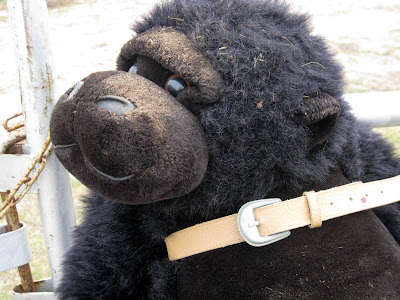 Following the advice of Mary, who told me as we entered the arena, “Hold the gorilla close to you so it won’t spook your horse,” I retrieved the ape and off we went to find our awaiting stretcher. Not a problem at all UNTIL…… we get to the stretcher, Bella sidles up to the stretcher just like I asked and I tried to lower the gorilla down to the stretcher. IT DIDN’T BUDGE!!!! I tried and tried free myself and my horse of this this primate, to no avail. It wouldn’t go! 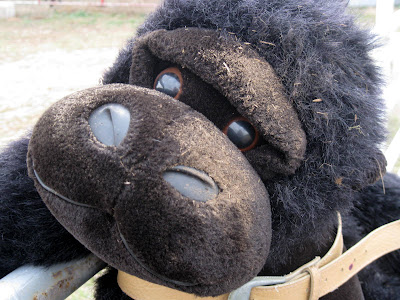 Finally Bella said she’d had enough and she was going to leave with or without me and that d**n monkey which is when I discovered that the gorilla had looped his belt AND my reins around the horn of my saddle which meant I couldn’t do anything be steer Bella in a small circle so here we are going in circles, gorilla arms flailing, me thinking that I am going to end up on Oprah with a scarf on my face to hide my scars and trying to explain how I came to be disfigured by a gorilla attack of my own choosing.

By now, the crowd is thinking that they’re seeing a freaked out horse and a rider without a clue of how the game is supposed to go so of course, people start to get interested in what’s really going on and someone finally realizes that I’m being ATTACKED BY A STUFFED GORILLA and steps in to rescue the rescuers.
Thankfully the gods heard our prayers and realized the bonds that bound us and I let the exhausted gorilla drop mercilessly onto the stretcher only to discover that his body had flopped lifelessly off the edge of the stretcher and he lay unconscious on the dirt. Bella, who had regained her composure the moment the gorilla was freed from our saddle stood quietly beside the stretcher and practically on top of the gorilla. As I dismount, I hear the announcers in true PETA fashion, “DON’T STEP ON THE GORILLA!” I did my best to put the patient on the stretcher and I thought I had done a good job of it until I see my partner take off and as she rode into the sunset carrying that poor creature, his arm was flopping wildly about as he bounced along.

I’m not positive about this but I am pretty sure that he was waving to me as he rode away but I don’t think it was a fully fingered wave…….
- November 22, 2009