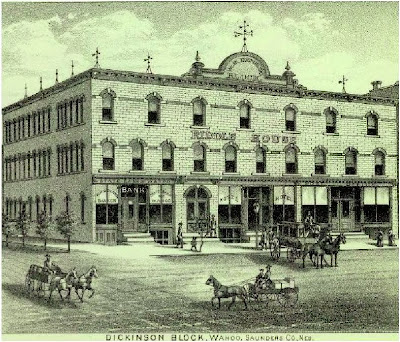 Although it is off-topic for this blog, I wanted to share with you what is going on in John’s life today. You may recall in a previous blog, I mentioned my husband is a “steeplejack”. His specialty is, simply put; repairing/restoring steeples & roofs on churches. It was a profession his dad learned from an old German craftsman. He then taught John and all five of his brothers the trade. Today, John and one other brother continue the tradition. It’s not all he does. He is really a “jack of all trades” or as he says, a "fix 'em up dude". He can do about anything in the construction business. And his most recent job has been quite interesting. 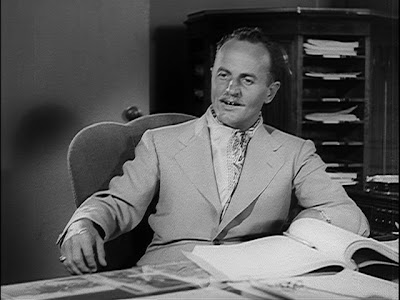 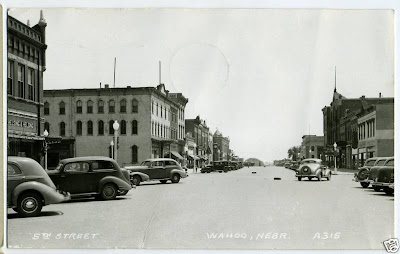 In downtown Wahoo, Nebraska, the former Riddle House Hotel stands on the corner of what is the main street. Over a century old, it is the known birthplace of famed movie producer, Darryl Zanuck, co-founder of Twentieth Century Fox, who's movies include Les Misérables, The Grapes of Wrath, How Green was My Valley, and All About Eve, to name a few. Its possible Zanuck’s father built and ran the hotel as some of the information I have read said Darryl was the son of a “hotelier”.** In the picture above, you can see the hotel on the left hand side behind the lamppost. It was quite elegant in its day. 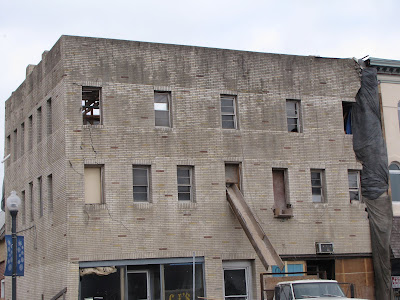 The hotel closed years ago. It was divided up into other businesses; a bar and some apartments. It changed hands many time but has been vacant and neglected for years and years. When the owner of the bar passed away, it was found that roof problems on the hotel had compromised the structure of both the hotel and the bar. Both were condemned and bids were sent out requesting the hotel be demolished without taking the bar with it. From what I heard, no company was real keen on bidding it. John and his brother was awarded the project. 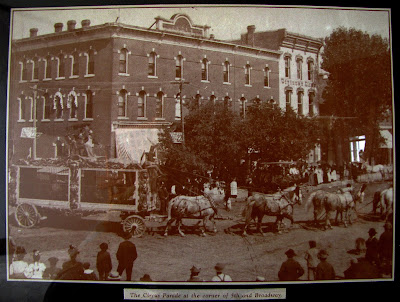 John found this old picture in the basement of the hotel. It is a circus parade turning down what is known as the main street in Wahoo. The hotel is behind the carriage. I took a picture of the picture, so it isn’t real clear, but there are lions in the cages being pulled by horses. And look at the people sitting above the cages. It is also interesting to see the spectators dressed in suits and the horses tied along the street. The picture above is taken from the same angle as the picture right below. Haven't times changed! Where cars now line the streets, there used to be horses tied to the hitching posts. 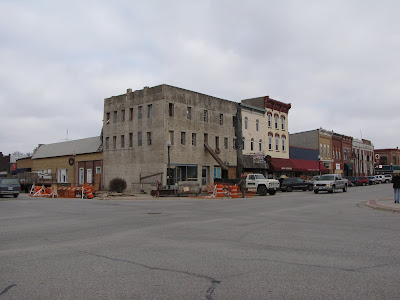 John and his brother and their respective crews began work on the building in August. It was dangerous – the first day a wall caved in and threw many of his crew from a scaffold. They trudged on. As they shored up the bar, John said there was a way to save the hotel. He wanted to save it so bad. But there are only funds available to demolish the place, not restore it. And today, the first wall went down.

I was shooting video from across the street. Watch the top left hand corner of the building start to bend out and then goes back in. John and one of his crew were pushing the wall out from the inside. My stomach was turning to mush. 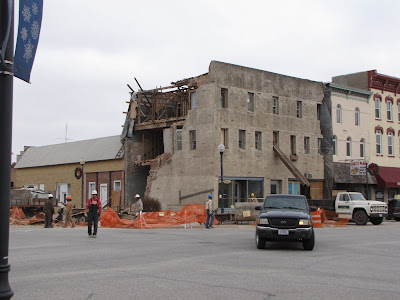 The end of an era.

**Since I wrote this blog earlier today, I've done some more googling about the hotel itself. I found that Zanuck's father was a farm boy from Iowa who worked at the hotel. The hotel was owned by Darryl's maternal grandfather, Henry Torpin.
- December 04, 2009