Dashing Thru The Snow 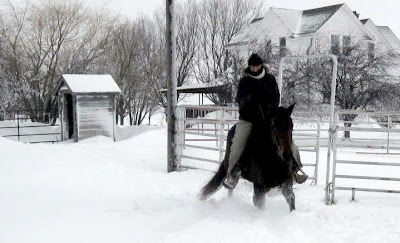 Although there was little snowfall overnight, the winds continued to blow and the drifts in our yard continued to grow. It seems the landscape changes every hour. We've done nothing to remedy our "snowed in" situation, except plug in the tractor. We don't have anywhere we need to be so we'll wait and hopefully the winds will die down tomorrow. 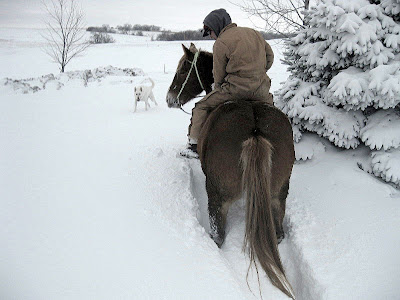 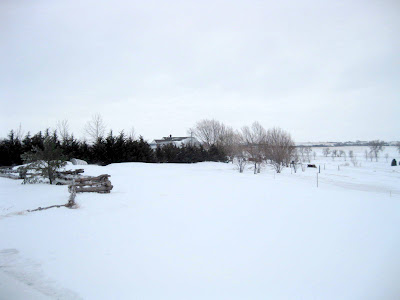 We were surprised to find a bigger drift when we rounded the curve of our driveway as the snow usually blows over that section. Although Windy took some rather big lunges through the first drift, she saved her energy on the next one. It felt like we were floating through it, trudging all the way to our county road. We found it completely closed to the west so we went east where the drifts were more intermittent. Under the snow, the ice clung to the gravel. Windy kept her footing, thank goodness, unlike our St. Bernard who was quite entertaining with his lack of coordination. 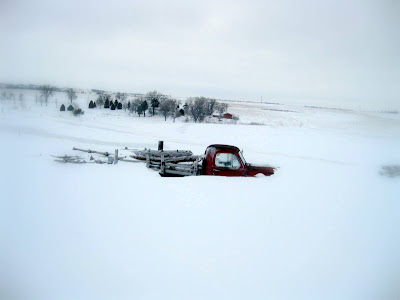 We went about a quarter mile down the road until the road turned to solid ice near the highway. Most of the major highways in this part of the county are closed today. The highway by us isn't, but the Department of Roads reports that it is ice and snow covered. We saw very little traffic on the highway; a tractor and a small sedan were all that braved it. 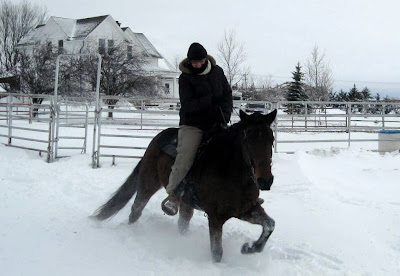 The driveway to our barn (to the right of this picture) has stayed open for the most part. It's just high enough that the snow blows on over. John went around that way and I had him take a picture of Windy and I coming through the drifts on the other side of the round pen. 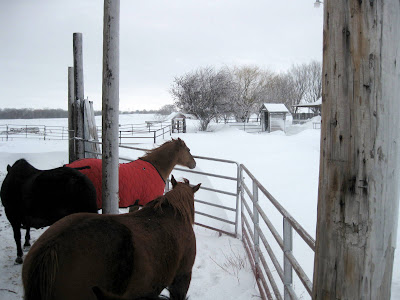 I think the horses enjoyed the short ride as much as we did. Those that didn't were waiting by the gate probably hoping for an opportunity to stretch their legs a bit, too. Maybe tomorrow.