I'm spending way too much time at the computer! But what else is new. Can't dance. Can't ride my horse. Heck, I can't get out of my drive-way! So it's been fun reliving those warm days on our good horses.

This next set of Lucky Shots I took because of the sky. I remember thinking that the sky just couldn't get any bluer and hoped I could capture it in the photos and happy that I did. Other than reducing the size, these photos weren't Photoshopped; they are straight out of the camera. 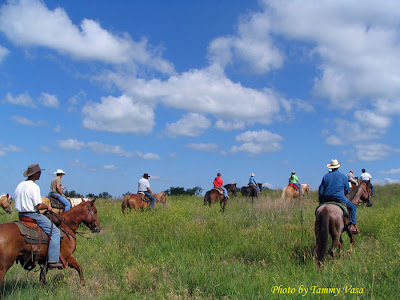 This photo was taken in 2006 at the Horsetales ride near Fullerton. Although this picture was taken in the fields, there were some beautiful trails in the trees and along the river. This was the only time we rode there as the facility no longer allows horses on their trails. It is unfortunate as it was a beautiful place to ride. 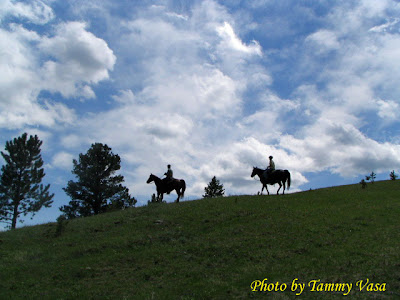 The next few pictures were taken on our trip to South Dakota in June of 2008. When we rode Deerfield Lake, the sky was changing all day long. It provided a back drop for dozens of pictures. These are a few of my favorites. 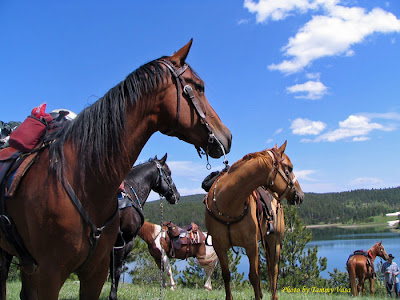 We had stopped for a break on top of a hill which provided us with a breathtaking view of Deerfield Lake. Our horses were tired. We tied one to a nearby branch and unhooked the reins from the bridles on the others horses and let them graze. They weren't going anywhere. They were, however, quite curious about a lone boat on the lake. I can't remember if it was motorized or not, but I took some great shots of the horses while they watched the boat. 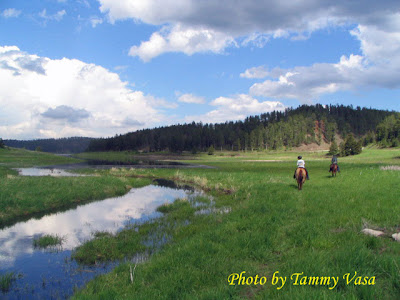 Coming around the end of Deerfield Lake, look how the clouds are reflected in the water. I was really disappointed that I had inadvertently changed the setting on my camera and this print would not blow up to an 8 x 10 with the necessary clarity. 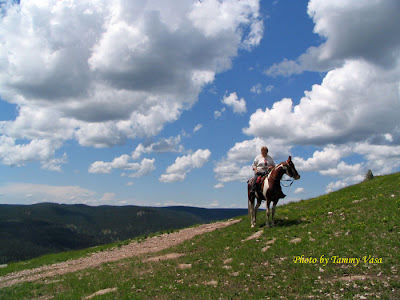 I took this picture of my friend, Kathy, near the summit of Hat Mountain, also in South Dakota. Kathy is afraid of heights and although the area was quite large, it was a pretty steep drop-off behind her, if I recall. 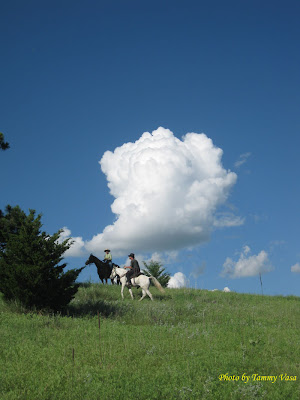 This picture was taken this past June at Horsetales Big Canyon ride near Basset, Nebraska. I loved the puff of a cloud behind the riders.

It's interesting that some of my favorite sky pictures were taken in June. I wonder if the temperatures have something to do with it or the time of year. Not saying the sky isn't pretty other times, but I have noticed in June it just seems to be above and beyond the norm.